Right now, 51,000 tax-paying St. Paul residents have deactivated library cards because of unpaid late fees. And Mayor Carter knew nothing of it until the library staff came to him. 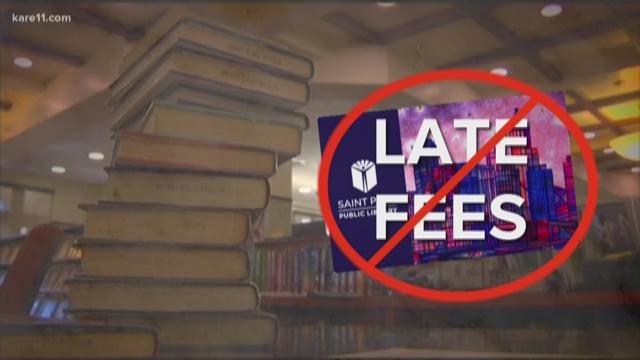 ST. PAUL, Minn. - Melvin Carter has been at the lead in St. Paul for nearly a year. But rarely have we seen him as jazzed as he is about breaking up with library late fees.

“Like honestly I can’t sit still, how excited I am," he said. "Because it's such a simple notion but it's such a powerful concept."

That's one in five library card holders. And Mayor Carter knew nothing of it until the library staff came to him.

“I didn't come up with the idea to eliminate late fees," he said. "It was one that came straight from the front line staff who have told us loud and clear they are tired of spending 10 percent of their time negotiating late fees with families who are trying to figure out how to pay the rent.”

Yes, library staff said they spend 10 percent of their hours negotiating with people who are struggling to pay, which equates to $250,000 in staff time. Put that dollar amount next to the outstanding balance of all late fees of $215,000, and well, Mayor Carter saw a solution.

Dump the late fees, end the negotiations, free the libraries.

“We've learned two things, important things about late fees," he said. "One, they don't make people bring their books back, they make people stay away from the library; and two, that people on one side of town don't bring books back late more than people on another side of town, but for some people a $12 late fee is an inconvenience and an irritation and for others it means a different decision about what we can have for dinner tonight, and we don't want that to be the case in St. Paul.”

What about the naysayers who don’t want their tax dollars to go to this? Or the complaint that it's a knock on personal responsibility?

“I don't think one single one of those folks would say they'd have never learned personal responsibility had it not been for late fees in the library," he said. "And the truth is, the library is there for us to learn. And so when people ask, once we eliminate late fees in our library how will people learn personal responsibility, my answer is – check out a book about it.”

And about that personal responsibility? This change, in other cities, has come with a fascinating result.

“Actually, some of the library systems across the country that have eliminated fees have seen their return rates increase and not decrease, because people appreciate being trusted and being valued," Carter said."

So come Jan. 1, with the city council's blessing, St. Paul will formally say goodbye to the late, late fee.

May it rest in peace.

“I always joke with folks, this was a really hard policy until I realized we actually want kids to read,” Carter said with a laugh.