DFL legislators this week fought a losing battle to remove the House Speaker's mute button, which allows the presiding officer to silence all of the microphones in the chamber. 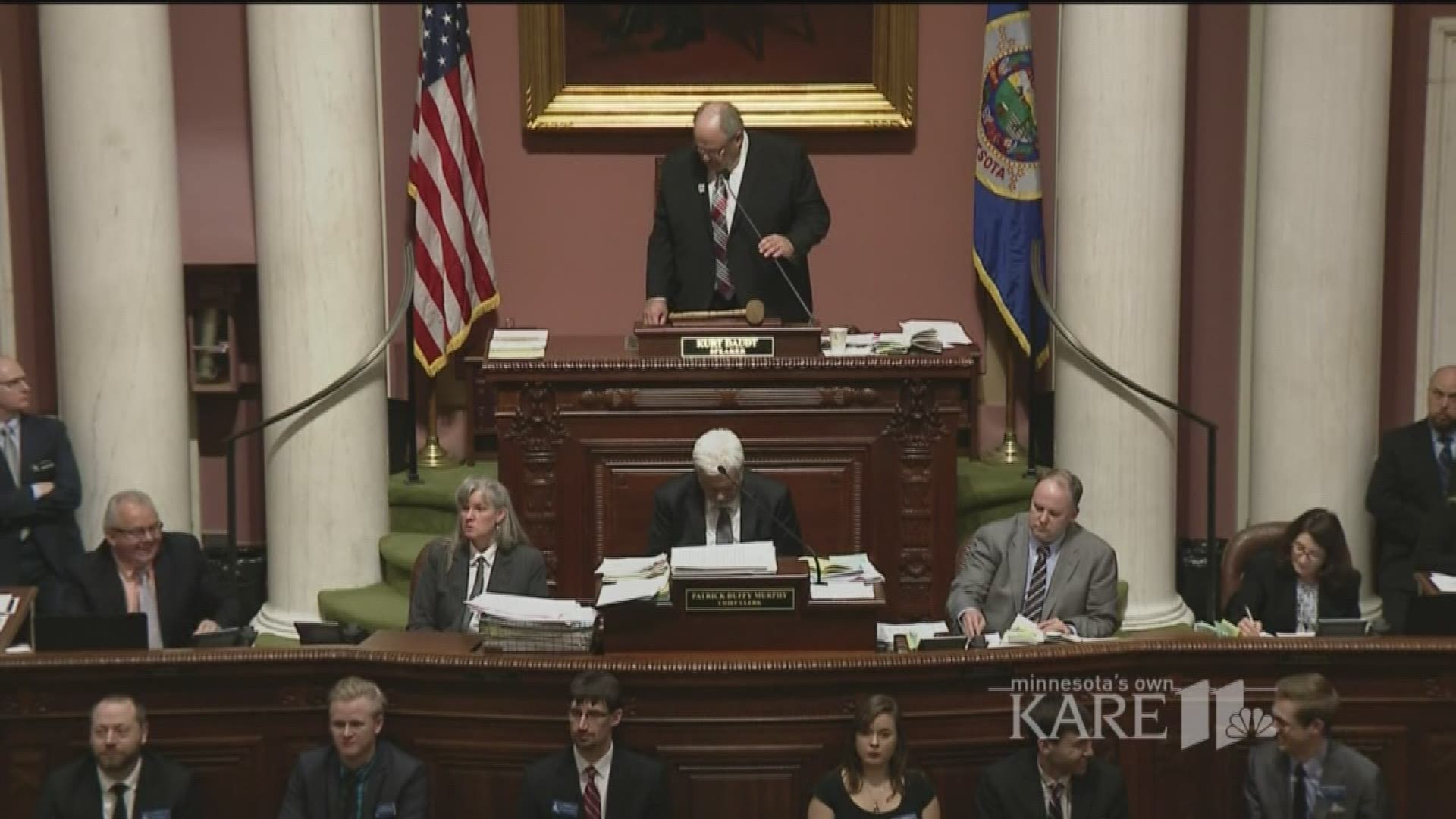 ST. PAUL, Minn. -- DFL legislators this week fought a losing battle to remove the House Speaker's mute button, which allows the presiding officer to silence all of the microphones in the chamber.

It's a tiny piece of equipment, but it means much more to some lawmakers.

"We need to show Minnesotans we don't need this artificial tool, this button, to hush people, to silence people," Rep. Erin Murphy of St. Paul told her colleagues during a floor debate Thursday night.

"The idea of cutting people off by silencing their microphones means we're walking away from listening to each other."

The button was installed as part of the Capitol Restoration project between the 2015 and 2016 sessions. Many of those taking part in the debate said they never knew it existed until Republican Speaker Kurt Daudt used it at the end of last session.

"I can’t tell you how shocked I was to read in the newspaper, as a member of this body, that a mute button was installed at the rostrum," Rep. Laurie Halverson of Eagan remarked.

"Stop the use of this mute button before it becomes a habit that hurts us all!"

Her argument came during a broader debate on the House rules for the 2017-2018 biennium. Rep. Jon Applebaum, a Minnetonka Democrat, offered an amendment that would've barred the use of the mute button but it failed on a party line vote.

Majority Leader Joyce Peppin called the mute button another tool that will help the House Speaker control the noise level in the chamber on those occasions when people don't follow decorum and speak out before being formally recognized by the presiding officer.

"As you know we do have hot mics in our legislature, which technically we could all stand up and scream at the same time," Rep. Peppin, a Rogers Republican, told her colleagues.

"But if 10 people or 20 people or 30 people are talking this is a potential tool that the presiding officer could use to do his or her job to maintain order on the House floor."

The 2015 session ended with a cacophony of complaints, with several Democrats shouting "Mister Speaker! Mister Speaker!" when Rep. Daudt ended debate and allowed a vote just seconds before adjournment.

A year later, when the noise level of DFL legislators started to rise during the closing moments of the 2016 session, Daudt could be seen pressing the mute button and the House video feed went silent momentarily.

As to the question of whether the mute button could be used to silence the opposition, Peppin said that when Democrats were in control of the House they found a procedural method to mute Republicans.

"A rule was put into place that silenced us. The majority put time limits on how long we could talk on issues."

During Thursday's debate cite existing House Rule 2.15, stating that "proceedings on the floor of the House must be recorded on an appropriate audio recording medium under the direction of the Chief Clerk."

Democrats asserted that if a lawmaker's microphone is muted during speech or debate those words won't be officially recorded, which would violate the rule.

"But when the button is pressed, no recording happens, which is really quite important, right? It can no longer be broadcast to the public, right?" Rep. Dave Pinto of St. Paul asked.

After consulting with Chief Clerk Pat Murphy, Thursday's acting House Speaker, Rep. Greg Davids of Preston ruled that it wouldn't violate Rule 2.15 because ambient voices can still be picked up from a distance even when the microphones are cut.

That prompted Rep. Mike Freiberg of Golden Valley to ask, "If the mute button is deployed, standing here in the back as I am, and I want to be in compliance with the rules, should I shout really, really, really, really loudly? Or just kind of loudly?"

Rep. Applebaum's proposed amendment was rejected on a party line vote, with the Republican majority voting against it.

Some DFL members shared a photo of the mute button on social media Thursday. It's a bronze colored button with an LED light embedded in it and the engraved letters "Chamber Mute" in yellow.

KARE went to the Capitol Friday in an effort to take a photo of the mute button, but -- before we could even ask -- the security officers at the entrance to the House Chamber said they'd been specifically instructed not to allow anyone to take a picture of the device. The Sergeant-at-Arms verified that was a standing order.

Republican Majority Caucus staff later clarified it's because news media are not allowed on the Speaker's rostrum for any reason, as part of House rules.

There's a long tradition of Capitol visitors stepping onto the rostrum to pose for photos with the Speaker, at times holding the speaker's gavel.