The governor's budget proposal heavily focuses on the state's recovery from the COVID-19 pandemic, proposing a fifth-tier tax bracket for the state's wealthiest. 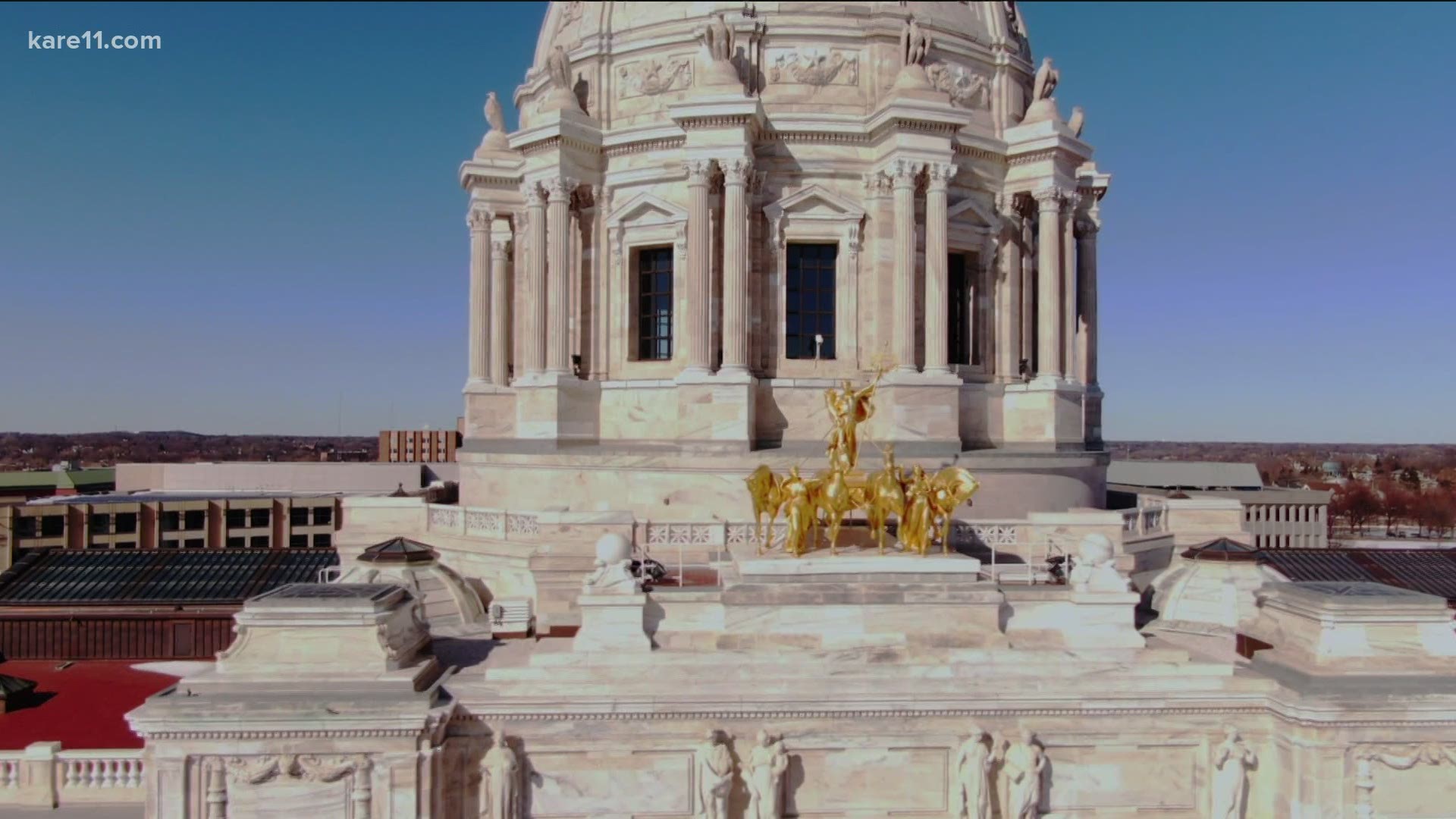 The state faces a state's projected $1.3 billion deficit for FY 2022-FY2023, the two-year budget cycle that begins July 1, 2021. If the budget for that biennium isn't balanced before then it will trigger a partial state government shutdown.

Walz's plan for solving the deficit includes tapping in the reserves, a.k.a. rainy day savings, for $1 billion. He would also carry over $217 million in projected unspent money from the current cycle. And, more controversially, he would borrow $130 million from the US Bank Stadium Reserve Account.

That account has ballooned in recent years due to the success of electronic pull tabs, and has far more in it than what's required to make the minimum $30 million per year payment on the stadium bonds.

The governor also has a wish list of new spending, to the tune of $1.6 billion over that two-year cycle. Part of that money would go to programs and special funds to help families and small businesses hit hardest by the COVID pandemic and the economic downturn caused by it.

That new spending also includes a sizable investment in state aid to school districts and targeted programming to help narrow the achievement gap and other racial disparities.

In order to pay for that new spending Gov. Walz proposed an array of tax increases, including an income tax hike on those who earn more than $1 million per year.  He's also pitching higher taxes on capital gains in excess of $500,000 per year, as well as higher corporate taxes. Walz would also look to raise taxes on vaping products and cigarettes.

Capitol Republicans immediately slammed the idea, asserting that the deficit can be resolved without new taxes. GOP legislative leaders pitched digging deeper into reserves and finding places to cuts spending across the board except for nursing homes and veterans services.

The governor outlined his "COVID-19 Recovery Budget" during a noon news conference, and Republican legislative leaders shared their response to the governor's plan on Tuesday afternoon. You can watch Walz's budget message below:

Walz said the state would need a "concerted" effort to recover from the pandemic's effects, especially since some groups - like students, working families, communities of color, and small businesses - have been hit particularly hard.

Several minutes into the noon press conference the governor's office released materials on the budget proposal. You can view it here.

In the plan outlined Tuesday Gov. Walz said the state needs to solve a $1.28 billion budget gap for fiscal years 2022 and 2023. Part of that gap comes from carry-over from the current year budget ($217 million), as well as $1.04 billion from the budget reserve and $130 million from the stadium reserve.

State Capitol Republicans: “We do not need to raise taxes on anyone. That’s a line in the sand..” GOP favors tapping reserves and spending cuts to balance budget. pic.twitter.com/ILHokjlFJN

“Not every Minnesotan was impacted by the COVID-19 pandemic equally. We know the COVID-19 pandemic hit our working families, small businesses, and students particularly hard. They need our help,” Walz said in a press release. “The budget I am unveiling today will make significant strides in helping those Minnesotans stay afloat.”

"People have suffered enough already," Gazelka said in a press release. "Employees, entrepreneurs, and many businesses have sacrificed for 11 months. The budget reserve can be used to protect people from hurtful tax increases that will further stretch their family budget and harm our economy. Senate Republicans will ask the government to tighten its own belt before we ever ask Minnesotans to tighten their belts even more.”

Asked about Gazelka's response, Walz called it a "gross generalization."

Walz said his Republican colleagues would hear from their constituents about the budget. The governor said he was willing to compromise on some aspects of the budget, but not on the safety of Minnesotans and the state's recovery from the pandemic.

Walz said regardless of the state's divided legislature, his proposed high-income tax increases were not too much, simply "people paying their fair share."

Walz said he had "cordial, respectful" discussions with Gazelka and other Republican colleagues Tuesday morning, and that he believes compromise is possible.

"Putting Minnesota into the top 3 for income and business tax rates without asking government to share in the sacrifice would be a disaster but fortunately has no chance of becoming law this year," he said. "Minnesotans should know that Republicans have their back - we are going to ask state government to tighten its belt, do more with less, and balance our budget without tax increases that would hurt our economic recovery."

On the other side of the aisle DFL House Speaker Melissa Hortman called the governor's budget "bold and progressive."

“Minnesotans expect the state budget to help them weather this pandemic and then thrive once it ends," Hortman said in a press release. "Governor Walz’s budget reflects the values of Minnesotans and incorporates the reality that COVID-19 has hit some people and businesses harder than others. Minnesota is a state of abundance - we have abundant natural resources, thriving corporations and non-profits, a talented population, and higher income per capita than most states. We can and should use the budget to invest in Minnesota and in Minnesotans to ensure economic opportunity for everyone."

With Minnesota's legislative session scheduled to end in May, the debate on the 2022-23 budget will likely continue for months.

Last month, Minnesota Management and Budget (MMB) projected a $1.273 budget shortfall for 2022-23, an improvement over previous projections in mid-2020 which called for a $4.7 billion shortfall. In its December forecast, MMB noted that the economic downturn sparked by the pandemic has affected all Minnesotans, but said unemployment had a disproportionate impact on lower wage workers.