"I call this the JustinKase," Justin says of his invention. "You don't want to use it, but just in case you need it, it'll be there." 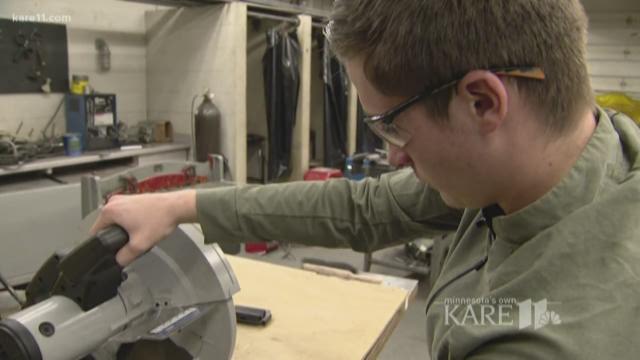 Inside, Somerset senior Justin Rivard was inspired in his shop class to try to save lives here.

“I call this the JustinKase,” Justin says of his invention. “You don’t want to use it, but just in case you need it, it’ll be there.”

Made of steel plates and connecting rods, Justin’s device slips beneath a classroom door and latches to the door’s jam.

With his device in place, Justin has yet to find a person who can push a classroom door open, including linemen from his high school football team.

Justin didn’t have to go far for his first big sale. Somerset High School ordered 50 of them, one for every classroom in the building.

“We started with the high school, then went to the middle school, then the elementary school,” says Shannon Donnelly, Somerset’s principal.

Donnelly keeps a JustinKase under her desk as well. She expects everyone in the school to know how to use one.

“We immediately, within a week of having these, went through an entire drill, all throughout the building, really walking through students and staff,” she says.

Justin has already delivered 54 of his devices to the Grantsburg School District, with 40 more on the way.

He knows of at least one company making a similar device, but says his can be put into place faster and costs less.

Justin is awaiting approval on his patent application.

Eric Olson is the technology and engineering teacher at Somerset High School. He’s not surprised by Justin’s creation.

“He's the special combination of motivation and brains and has a motor that just keeps going,” says Olson.

After graduation this spring, Justin will be turning over his fledgling business to his father. Starting in July, Justin will begin serving his country in the Army.

Justin says he used to wonder how if he would leave an impact at his school. Not anymore.

“My impact is in every room,” he says.