A GoPro camera lost in the Temperance River for a year has surfaced with a story to tell. 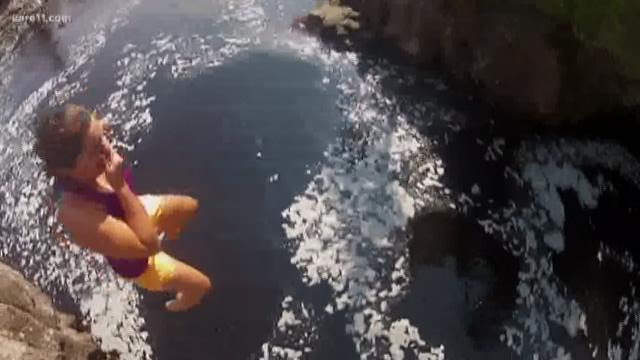 SCHROEDER, Minn. — Note: This story originally ran in September of 2015.

When Kyle Puelston felt the GoPro camera slip off the top of his head, his heart sank as deep as the Temperance River bottom.

Which is also where his head-strap and GoPro were headed.

After a year underwater, his GoPro proved him wrong.

Nearly a year to the day after Puelston lost the camera during a cliff dive, two brothers pulled it out of the river while snorkeling.

The GoPro was still dry inside its waterproof case.

Chris Flores took the camera home, though his brother actually pulled it out of the river.

"He found a ring, a pair of sunglasses and a GoPro," Flores said. "I found a skateboard and some construction debris, so I got the good end of the deal."

Flores – who didn't own a GoPro – was elated with his bounty, until he viewed the camera's media card and discovered videos Puelston had shot with his children.

Flores also found video that Pueltson – a sergeant with the Chisago County Sheriff's Department – had shot during SWAT training.

By still-framing a patch on a deputy's uniform, Flores was able to make out the words "Chisago County," which led him to Puelston, who was stunned to get the message.

"It's a testament to his character," said Puelston. "I've told this story to a couple of people and their first reaction is, 'Wow, I'd never do something like that. I would have just kept the camera.'"

Puelston didn't know it at the time, but Flores was being steered to do right thing by two powerful forces: his Christian faith and his youngest daughter, Morel.

Last year, at 4-months-old, Morel had a heart attack caused by a tumor in her left ventricle.

"It's all so fleeting, we're not guaranteed tomorrow," said Flores, who performed CPR on his daughter until the ambulance arrived at his families' Jordan home.

Heart surgery saved Morel, but her father couldn't watch those Puelston family videos without thinking of his daughter.

Puelston was so grateful to get the video back, he told Flores to keep the camera. He'd already purchased a new one anyway.

Flores agreed, as he clutched his healthy daughter, now approaching her second birthday.

"She's definitely going to be in some GoPro videos," he smiled. "She's the one that'll be jumping off the cliff."