In honor of the 50th anniversary of the Apollo 11 mission here's some moon weather info to impress your friends. 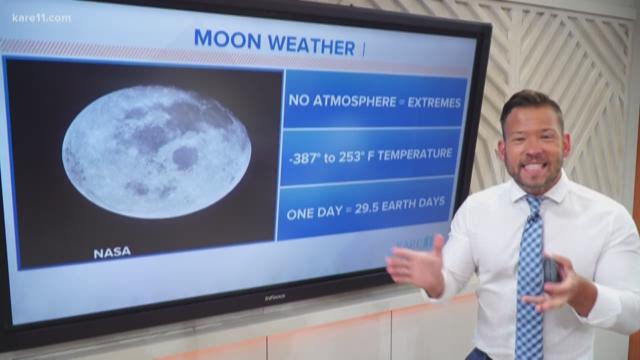 Extreme weather swings are routine in Minnesota, but the stuff we see here is nothing when compared to the climate on the moon.

In case you ever wondered what the weather is like on the moon, it's pretty rough. In honor of the 50th anniversary of the Apollo mission here's some moon weather info to impress your friends.

We're pretty lucky on earth that we have an atmosphere to protect us from cosmic radiation and extremes in temperatures. First, we have to explain how different day-night cycles and the span of a year are on the lunar surface. A day on the moon actually takes almost a month in earth time! So, half the moon is in daylight for 2 weeks and half in darkness, then they switch so it takes 29 days approximately for a lunar day (in terms of 'earth' days).

On the lit side of the moon temperatures can get up to 253 degrees F (212 is boiling in case you're wondering) and on the dark side some of the craters can get as cold as -387 deg F (again a reference -459 F is absolute zero where molecules stop moving!).

Of course the temperatures are interesting but there's also no air to breathe very little gravity!