Talking to your child about the dangers of online gaming

When an eight-year-old Minnesota boy fell victim to a Fortnite scammer, many asked how young is too young to be playing the game? 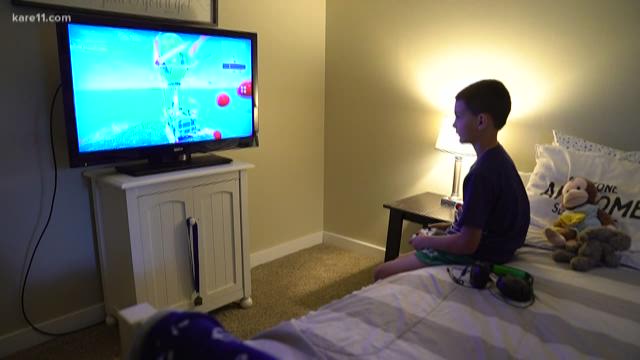 MINNEAPOLIS — When KARE 11 shared the story of eight-year-old Charlie Pearson, who was targeted by a scammer on Fortnite, many viewers shared strong reactions after learning how a child so young was pressured into sending pictures of his mom's ID and personal information.

"I didn't want them to get mad at me so I just did it," Charlie said.

Most commenters questioned why Charlie was allowed to play the game at all.

Charlie's mom, Krista Kneeland-Pearson, says she does wish she had done more to safeguard her son. She wanted to speak up because she knows there could be other parents who might be able to avoid what she is dealing with now.

"How scary it is that this guy was able to talk to Charlie into doing something behind my back," she said. "What an awful feeling that is."

If you simply look at age ratings, Fortnite is Rated T for Teen in the U.S. and ages 12 and up in the U.K. The major factor is moderate violence.

"It's a shooter (game) but it's not overtly violent or anything like that," said Hamline University professor Jen England, who is a gamer and also teaches courses on gaming culture. "Games have a lot of valuable, kind of, life lessons that they can teach us."

She says some young kids can benefit from the problem solving and communication skills they can learn on Fortnite, but only if their parents are also willing to learn about the game's true cost and risks.

Lakeville Police Department Lieutenant Bill Gerl, who is investigating Charlie's case, says it's advice he's given his own boys, who also play the game.

That conversation is also happening in the gaming community. Ninja, the most popular Fortnite player/streamer in the world, addressed rampant scams on a recent video.

"If you are a little kid, even if you're an adult, anyone can get scammed," he said. "Do not trust anyone on the internet that you do not know."