Tensions high at Edina HS after lawsuit from conservative group

Days after members of the Edina High School Young Conservatives Club filed a lawsuit claiming the district violated their First Amendment rights by shutting down their club, its members and those who disagree with their claims say there is added tension at the school. 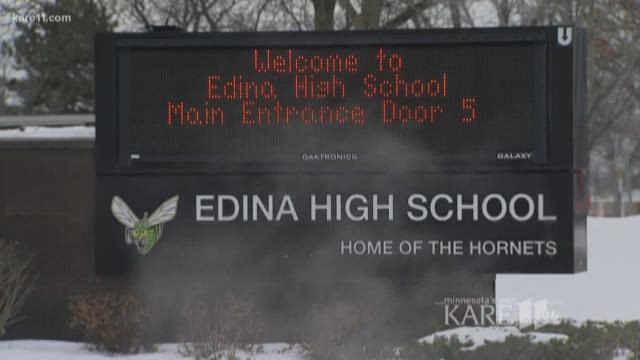 EDINA, Minn. - When she and 10 other Edina High School students sat during the playing of taps at a Veteran's Day ceremony last month, junior Samira Kalmoi says she knew exactly what she was doing.

That protest led to verbal and written clashes between students, and last week a lawsuit filed by members of the Young Conservative Club, who claim the district shut down their group and violated their First Amendment rights.

Days later, the two sides still starkly disagree and say there is now added tension in the hallways of Edina High School.

"That was the problem with these students, is that they were attacking other students. And then they played that victim card so that it didn't look as bad," Kalmoi said.

"I think the easy way to get at this is to make it a racial thing, and it's not. And it's about respecting the rights of protesters and the right to disagree with those protesters," said Geoff Spades, the father of the president of the school's Young Conservative Club.

Spades says his son has been harassed every day since the lawsuit was filed.

"He gets threatened on social media, threatened he's going to get jumped," Spades said.

But Spades believes the problem at Edina High School goes beyond the Taps protest and how the school handled it. He believes teachers focus on politics from liberal viewpoints in just about every class.

"I'd like to think that if my son goes into a math class, he's being taught math. And neither his politics nor the teacher's politics really matter," Spades said.

"They're blinded by their privilege. That's what I would say," Kalmoi said.