Thanks to U of M, gaseous sea turtle can dive again

Popular Sea Life turtle at Mall of America found herself stuck at the top of the aquarium. 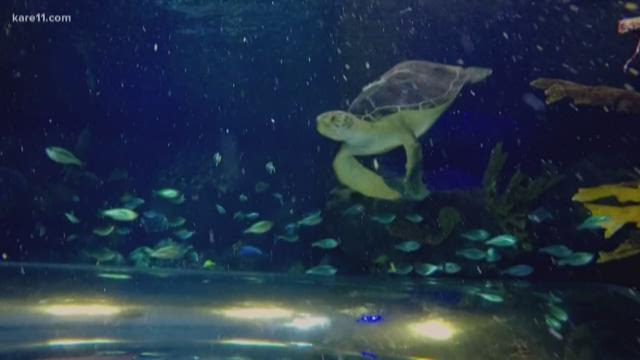 BLOOMINGTON, Minn. — If you’re a 4th grade boy, it’s the kind of problem that’s likely to bring a snicker.

If you’re a sea turtle named Seemore, not so much.

There's just no delicate way of putting it.

“She doesn't know to let it all go,” says Knott, revealing only the slightest of a smile.

As Knott knows better than anyone, the notion of a gaseous 100-pound turtle is no laughing matter.

Seemore’s trouble started when she was hit by a boat propeller in the Florida Keys, damaging her shell and spine.

Credit: Boyd Huppert, KARE
Damage caused by a boat propeller on the shell of Seemore the sea turtle

The injury led to Seemore’s rehab at a facility in Florida and her eventual placement at Sea Life in Minnesota.  It also led to Seemore’s inability to relieve herself of gas as nature intended.

Not good, for a sea turtle.

Left on its own, Seemore’s gas bubble prevents her from diving to the bottom of the aquarium.

“On her bad days she is literally rear-end straight up out of the water column and her head down,” Knott says, “and she just floats kind of aimlessly.”

It’s a condition know as “bubble butt” and it is not uncommon among sea turtles in captivity, many of which, like Seemore, are in aquariums because of injuries they sustained in the wild.

Knott says it would be the equivalent of human being trying to dive to the bottom of a pool with a balloon strapped to his backside.

Fishing weights, wrapped in epoxy, and affixed to the tail-end of Seemore’s shell, helped give her back the balance she needed to dive.

But the fix proved to be temporary.

So, he turned to the University of Minnesota.

“I mean, like, what is not altruistic about helping a sea turtle, man,” Skahen said with a laugh.

A CT scan gave the team a look at Seemore’s damaged innards.  Then, team members produced on a 3D printer the first of several prototypes of a “backpack” on which weights could be fixed to Seemore.

“This is the best thing I’ve done my entire time at college,” Skahen said a few days before his graduation from the U of M.

On Tuesday, Knott pulled the university-designed backpack over Seemore’s shell and returned her to her tank.  Perhaps out of habit, Seemore hugged the surface for several minutes, before diving to the bottom to take a look around.

The backpack was designed with a breakaway feature, should Seemore get tangled up with an object beneath the surface.

Nonetheless, Knott stayed overnight Tuesday at the aquarium, sleeping on the floor and waking every few minutes to keep an eye on Seemore.

Credit: KARE
Knott sleeping on the floor and waking every few minutes to keep an eye on Seemore.

“Otherwise, he said, “I'd be laying in bed with my eyes wide open, worrying about Seymour.”

For Knott, it’s a culmination of three years of effort aimed at improving Seemore’s life.