The story behind the dressed-up Sinclair dino in Champlin

About 10 years ago, Diana Merkl started dressing up the Sinclair dinosaur outside her work. 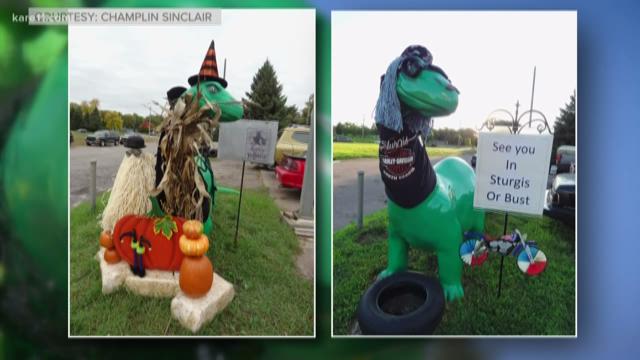 CHAMPLIN, Minnesota — A Champlin woman had a simple idea that spiraled into what's now become a roadside attraction.

About 10 years ago, Diana Merkl started dressing the Sinclair dinosaur outside her work. Merkl is the office manager for Champlin Sinclair, a full-service station along Highway 169. Diana's husband, Jim Merkl, has owned the station with his brother for more than 40 years.

Merkl remembers giving "Dino" a scarf, saying, "I was knitting and it was a horrible Minnesota winter so I knit a scarf for him and it has mushroomed from there."

Merkl dresses up Dino for holidays, events and just for fun. Right now, Dino has a bunch of dinosaur stuffed animals, or baby Dinos, surrounding him with a sign that says, "Happy Mother's Day. Wanted: Babysitter."

Credit: Heidi Wigdahl
Diana Merkl started dressing up the Sinclair dinosaur at her work about 10 years ago.

"Most holidays he has something that will remind people what's coming. In fact, a lot of times when men come here... when we have Valentine's Day, they'll say, 'I'm glad you reminded me,'" Merkl said.

Customers also drop off costumes for Dino. They've left wigs by the front door and thank you notes with money, requesting Dino buy himself a new hat.

"She started that many years ago and the garage... it used to be full of my motorcycles and now it's full of her dinosaur costumes," Jim Merkl said.

Diana said it's rare for Dino to not be dressed up, adding, "If it isn't dressed up, people will come and tell me that he's nude and I need to get some clothes on him."

Every year, Merkl puts together a calendar of Dino in all his costumes. Money raised from the calendars benefits the American Cancer Society's Relay for Life in Stillwater.

Credit: Heidi Wigdahl
Dino has many different costumes, including one to cheer on the Vikings, celebrate the first day of school and to mark the Minnesota State Fair.

"That's where I walk and where I lived when I had cancer," Merkl explained. Merkl has been in remission for 30 years.

"Cancer changes your perspective," she said. "My outlook is that if I made you smile or laugh, I was serving my purpose on Earth today."

Merkl said there's no standard uniform for Dino. During Christmas, Merkl dresses Dino up as Santa. Kids can leave letters for Santa in a mailbox.

"Dino writes them back. Tells them that he passed the letter on to Santa when he saw Santa last night," she said.

Customer Geri Nelson of Champlin said her granddaughter always wants to visit Dino. "She'll get up on him sometimes and take a picture. It's really fun," Nelson said.

Mike Spence of Anoka said Dino is an old landmark, adding, "I always enjoy when I come back to Minnesota. I see the Dino dinosaur. I know I'm home."

Merkl describes Dino as a sort of "community bulletin board" and said, "I like to make people smile and laugh and Dino does that for me."