Tina Smith has traded her Lt. Governor title for Senator. Here's a little background on our new representative in Washington. 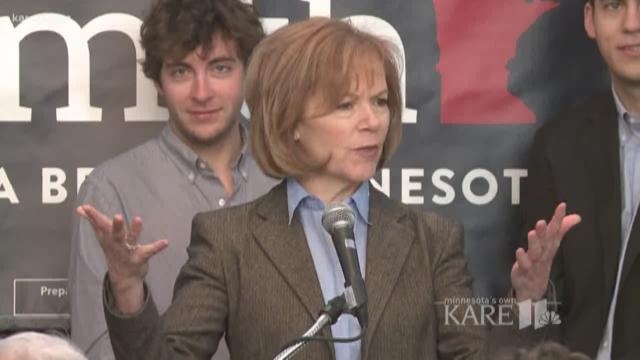 WASHINGTON, D.C. - Some call her the insider's insider. And Wednesday, Tina Smith was sworn in to replace Senator Al Franken.

Smith, born in New Mexico, earned a B.A. from Stanford University in 1980, according to her U.S. Senate bio. She also attended Dartmouth College, where she earned an M.B.A. from the Tuck School of Business.

Smith, a wife and mother of two adult children, was appointed by Governor Dayton to fill the vacancy caused by the resignation of Al Franken following sexual misconduct allegations.

Before running for Lieutenant Governor of Minnesota, Smith served as chief of staff to Minnesota Governor Mark Dayton. She has also held roles with Planned Parenthood. Wednesday, Republican Karin Housley released a statement saying in part she is hopeful Smith will put the values of Minnesotans first while serving.

“As Tina Smith takes the oath of office today, I am hopeful that she will put the values of Minnesotans first while serving out the remainder of Al Franken's Senate term. However, Smith's career as a lifelong Democrat political operative, and role as a leader in pushing for abortions at any cost as a Planned Parenthood Executive, gives reason to be concerned as to whether she will stand up for everyday Minnesota values."

David Schultz, a political science professor with Hamline University, says Smith has never hid from her record and from her work with Planned Parenthood.

Schultz says Smith has an opportunity to define herself over the next couple of months.

“At the same time, opponents have a golden opportunity to also define her. She is going to be battling for a definition of who she is and what her image is,” he said. “The challenge for her is sort of two-fold. Developing the name recognition and be a credible candidate in 2018. She barely is going to have incumbency. With that, she has to figure out how to use that short period of time in the senate to develop some kind of a record to run on.”

For now, Smith will remain senator until a special election is held in November. She says she plans to run for the seat.