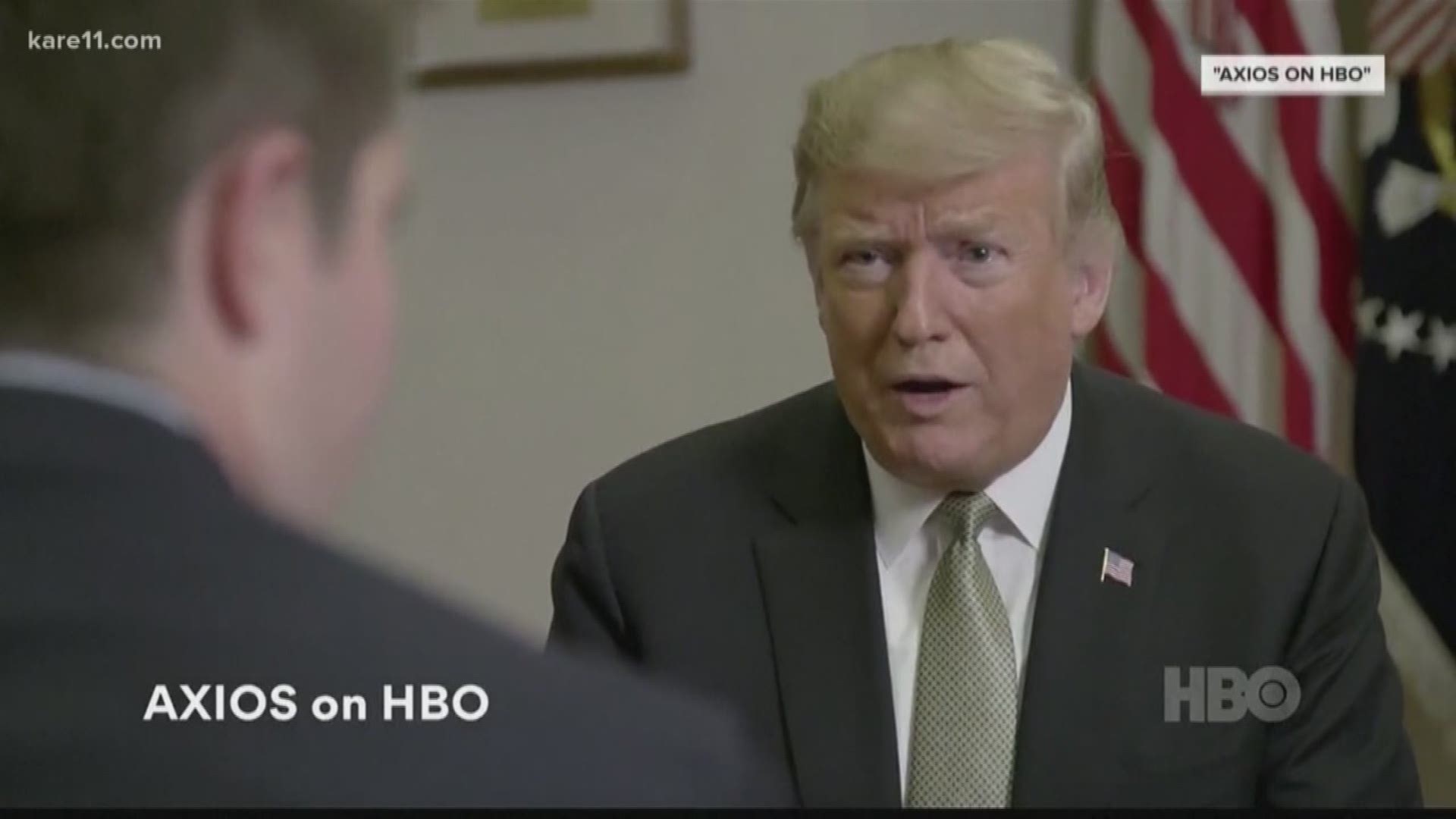 MINNEAPOLIS -- Changing citizenship rules that have been in place for more than a century is easier said than done.

The matter is up for debate again because President Trump, in an interview with Axios online news service, said he'd use an executive order to end birthright citizenship in the US.

"We're the only country in the world where a person comes in, has a baby, and the baby is essentially a citizen of the United States for 85 years with all of those benefits," Trump told Axios.

The president was mistaken about the first part. The United States is actually one of at least 30 nations that grant citizenship automatically to people born within their borders. It's been law in the US since the 14th Amendment to the Constitution was adopted in 1868.

The president's words were viewed by many as an attempt to solidify the Republican base ahead of the midterm elections, and to key in on the Central American refugees making their way through Mexico as a group.

The 14th Amendment was originally intended to guarantee citizenship to former slaves, because the US Supreme Court had ruled in the 1857 Dred Scott case that slaves weren't citizens and weren't entitled to the rights of other American citizens.

An 1898 Supreme Court ruling made it clear the 14th Amendment applied to all those born here, not just freed slaves.

"It’s well-settled under US law and has been for well over 100 years that the 14th Amendment to the Constitution confers citizenship to all persons born within the US, regardless of the citizenship status of their parents," Steve Meili, and immigration lawyer who teaches at the University of Minnesota School of Law, told KARE.

Vice President Pence told reporters Tuesday that the Supreme Court has never looked into the specific issue of how the 14th amendment applies to immigrants who are in the country without permission.

Such a move by President Trump would immediately be challenged in the courts, and the Supreme Court wouldn't even necessarily take it up, according to Meili, because birthright is so firmly established in the Constitution.

"Of course, the US Supreme Court has to decide whether to hear such a challenge and they might decide it’s a well-settled enough principle that any change to the Constitution has to go through the constitutional amendment process."

That process is a very difficult hurdle, as backers of the Equal Rights Amendment discovered in the 1970s and 1980s.

Constitutional amendments have to be approved by a two-thirds majority in both chambers of Congress, and then ratified by the legislatures in three-fourths of the states. The ERA passed Congress, but failed to cross the ratification threshold.

Just the idea of changing the rules could place immigrant families on edge, and create uncertainty.

"I mean it’s scary to think about your own child might not be a US citizen, or if you’re pregnant is this child you’re about to give birth to going to be a US citizen?" Kara Lynum, a St. Paul immigration attorney, told KARE.

Lynum said the president's words could confuse immigrants who are parents of US-born children, and cause them to skip applying for programs and benefits those children are legally entitled to receive.

"It has a real chilling effect, even if none of this ends up happening," Lynum remarked.

And while the president seems to be targeting undocumented immigrants, President Trump's pledge disturbed some children of legal immigrants too.

"He says these things without researching the issue, and you don’t know who it applies to, who’s in, who’s out, it’s going to cause mass chaos and confusion," Abou Amara, a first generation immigrant and law student, told KARE.

Amara's mother came to America from the African nation of Sierra Leone to go to college, and she was issued a student visa. She went through all the steps to attain legal residency and US citizenship.

But she wasn't a full-fledged citizen yet when Abou was born, which leaves him to wonder whether he would stand under Trump's immigration policies.

"I feel so fortunate that the Constitution protected me and millions of other people, and now the president of the United states is saying that Constitution doesn't apply to me!"

The president's latest proposal is part of an array of other actions by the Trump Administration aimed at tightening immigration. Temporary Protected Status, or TPS, has been rescinded for immigrants from several nation, and the numbers of new refugees granted asylum has dropped significantly in the past two years.

Trump has also proposed a "public charges" policy that would penalize immigrants for using government assistance programs, potentially disqualifying them from permanent residency and citizenship. This is consistent with the president's calls for accepting only immigrants who already have job skills that in demand and the financial means to afford the cost of living in the US.