U of M begins trial for new brain cancer treatment

A new trial at the University of Minnesota is looking to build on one of the most promising brain cancer treatments in more than a decade. 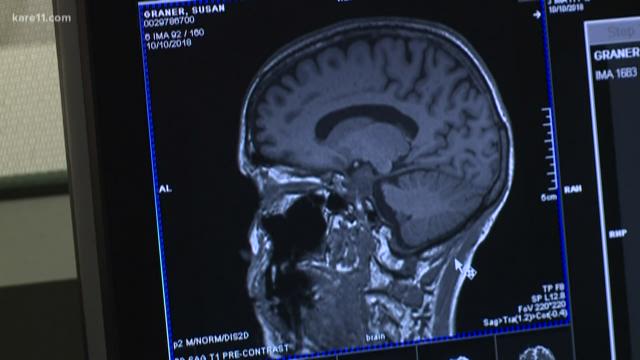 MINNEAPOLIS - Glioblastoma is a devastating, deadly brain cancer that kills more than 13,000 Americans every year. For most, survival time after diagnosis and surgery, is less than two years, even among high profile patients like John McCain and Beau Biden.

Now a new trial at the University of Minnesota is studying one of the most promising treatments in more than a decade.

There are 380 patients taking part in a Phase III trial involving a multi-step treatment process. It begins with surgery, followed by immunotherapy and, finally, a drug that triggers a targeted chemotherapy in the brain.

Susie Graner, a 61 year old grandmother from Mendota Heights, is one of the patients randomly selected for the study.

A little more than a year ago, her life changed dramatically when a doctor discovered Glioblastoma. Graner went into emergency surgery and, for several months, she was hopeful that her cancer was gone.

"A year after my surgery, my MRI showed that it was really starting to grow back," said Graner.

Dr. Clark Chen, Head of the Neurosurgery Department at the University of Minnesota Medical School, says Glioblastoma is known to grow back aggressively, but is also incredibly hard to track.

"There are probably more tumor cells in this mass, than people in the world, said Dr. Chen. "When the tumor recurs, the expected survival of that patient is somewhere on the order of four to nine months. That's it."

But Dr. Chen and the Neurosurgery Department at the U of M are now trying a different kind of treatment. It's one of the most promising options since the last major step forward back in 2005.

"The unique aspect of this treatment is we create chemotherapy in the brain," said Dr. Chen.

For patients like Graner, the trial begins with a second surgery to remove the tumor.

"Then we injected the viruses in this area," said Dr. Chen.

The viruses, named Toca 511, are bio-medically engineered and, when injected into the brain, act as a immunotherapy.

That process takes about six weeks.

Then, patients move to step two, a pill, called Toca FC, that target the brain in a different way.

"When that drug combines with the tumor infected with the virus, you produce a high dose of chemotherapy, that not only destroys the tumor, but re-educates the immune system," said Dr. Chen.

"One in five, or 20 percent, of the patients are living out three or more years," said Dr. Chen.

Graner says she hopes to join those patients who have defied expectations, but she says it's not the only reason why she's taking part.

"I'm 61 years old, I've had a great life, maybe I can help others by doing this," Graner said. "Honestly, I'm not in control and I'm okay with that. I know God has my life in his hands," said Graner.

Dr. Chen says, within the next year or so, they'll begin to see whether or not this new approach is as promising as it appears.