U of M to study virus as potential carp control 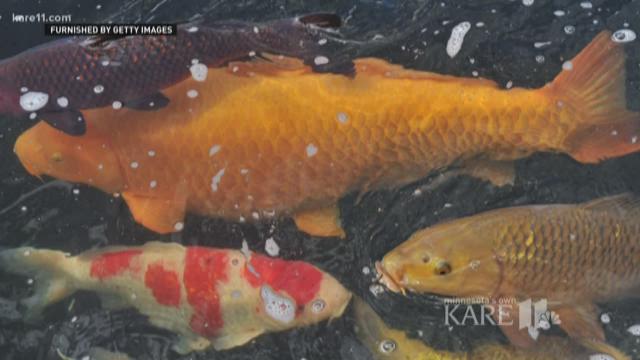 MINNEAPOLIS - Of all the aquatic invasive species being studied at the University of Minnesota, there's one that is often forgotten.

"We have common carp in here right now," said Nick Phelps, Director of the Minnesota Aquatic Invasive Species Research Center. "It was introduced in the late 1800's as a food source for European settlers."

The common carp is now more known as a source of destruction to lake vegetation, which is why researchers have spent years looking for ways to control them.

"The one that seems to be rising to the top perhaps is Koi herpes virus," Phelps said.

The virus has shown no impact on any other species, but it has a big impact on the gills of both koi and carp.

"It's highly lethal in ponds and tanks. It will kill 80, 90 maybe 100 percent of fish if they haven't been previously exposed," Phelps said.

Researchers discovered the virus in a small cluster of Minnesota lakes south of Mankato this summer and next spring they plan to study whether the pathogen could be intentionally deployed to control carp in other lakes.

"We'll bring in native species (to the lab), we'll have invasive fish in here, we'll challenge them with the virus," Phelps said. "The idea being that the native fish are unharmed and the invasive fish all die."

Australia made headlines when it announced plans to introduce the virus in the wild next year, but Phelps says more research is needed before it happens in Minnesota.

"To be sure we've got all the questions answered before we bring this out to a lake," he said. "Because once it's out there is no getting it back."