Magellan Midstream Partners estimates that up to 500 barrels of gasoline were released into the parking lot. 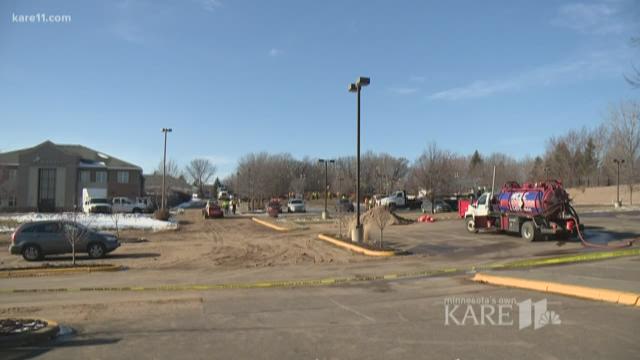 The City of Eagan says a pipeline owned by Magellan Midstream Partners was punctured by a soil boring company at 12:30 p.m. Monday. Life Time and its neighboring businesses were evacuated but no one was hurt.

Magellan estimates that 500 barrels of gasoline were released into the parking lot. They say the contractor that struck the pipeline is not affiliated with them.

Eagan police say Life Time Fitness and Thomas Center Drive will be closed until at least noon on Tuesday.

Update on Gasoline Leak: Lifetime Fitness and Thomas Center Drive will be closed until at least noon on Tuesday, January 9th. Businesses affected have been notified. We will update as more information becomes available. pic.twitter.com/qrXLT2sW5k

Magellan says more than 50 people including their staff, emergency responders, regulators and environmental specialists are on site cleaning up and monitoring air quality. The level of gasoline in the air is classified as a "nuisance" at this point and not a health risk, the city says.