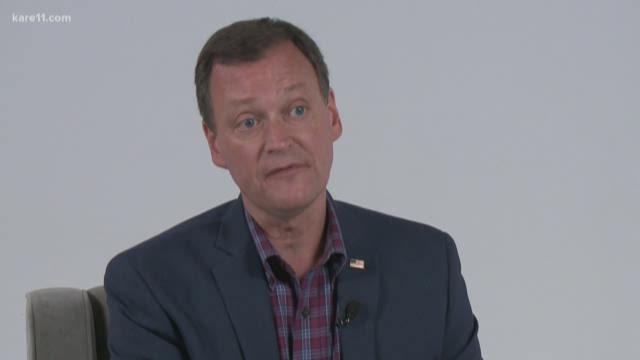 MINNEAPOLIS -- If you've been near a TV lately you've no doubt seen Louise, a cancer survivor from St. Louis Park who warns, "We cannot let Jeff Johnson become Governor."

Johnson is a Hennepin County Commissioner and Republican candidate for governor. The organization running the ad, Alliance for a Better Minnesota, support his Democratic opponent, Congressman Tim Walz.

A narrator can be heard saying, "300,000 Minnesotans will lose their health insurance under Jeff Johnson, and insurance companies could deny coverage for those with pre-existing conditions."

We can verify the ad is based on Johnson's actual campaign stances, and some people would pay more for insurance if they were to become law. But it's difficult to predict how many people would be denied coverage or find health insurance completely unaffordable under those proposals.

The claim that 300,000 persons would lose coverage is based on a Johnson opinion piece during his 2014 campaign for governor. He said his first goal of governor would be to seek an waiver from the federal government, allowing Minnesota to opt out of the Affordable Care Act.

The Dayton Administration has reported at least 300,000 Minnesotans gained access to health coverage as a direct result of the ACA, because it allowed the state to expand eligibility for subsidized health plans known as Medical Assistance and Minnesota Care. An additional 80,000 qualified for instance tax breaks, or discounts, on private plans sold through the state's MNsure health exchange.

If Minnesota were to opt out of the ACA, the Alliance for a Better Minnesota argues, those health programs would shrink, and people would lose coverage.

It's difficult, however, to know how the insurance landscape will look in 2019 and beyond because the Affordable Care Act is being challenged in the courts, in Congress and by the Trump Administration.

Johnson contends that the federal government won't grant a waiver to any state, unless that state can guarantee that people currently covered by the ACA will still be covered under the state's health care laws.

But he asserts people who qualify for public plans should have other options for using those dollars.

"Those who are on subsidized insurance, let them take that money, rather than put them into one government system, let them take it and spend it how they want," Johnson told KARE.

"If they want get an insurance policy in the private market, that’s fantastic. If they want to buy into the public market or MNSure, or whatever it’s called at the time, I’m okay with that."

This claim is based on Johnson's desire to revive the high-risk insurance pool, known as MCHA, for people with pre-existing conditions.

He asserts that's not the same thing as letting insurers outright deny coverage.

"Let’s move back where we were before, which was much better than we have right now, which was the high-risk pool for the people who have preexisting conditions, or just can’t afford what is out there," Johnson explained.

That high-risk pool existed for 40 years in Minnesota and was subsidized by insurers and taxpayers.

"We can subsidize that. It’s expensive, but Minnesotans were willing to pay for that before, and frankly, it was cheaper than what we’re doing now, and covered almost as many people."

The high-risk pool ended with passage of the Affordable Care Act, which prohibits insurance plans from denying coverage based on pre-existing conditions or denying services previously received.

The federal law also requires a minimum coverage for a defined set of preventative and diagnostic services that weren't covered by some plans before the ACA.

Both of those changes drove up the cost of private insurance, especially for those in non-group plans who rely on the individual insurance market. There weren't enough healthy people in the individual market to balance out those who required more expensive care.

The legislature in 2017 responded with rebates to help offset the cost of insurance premiums, and spent part of the budget surplus to back up insurance companies that were suffering huge losses in the individual market.

So, in theory, moving people with pre-existing conditions into a high-risk pool, would lower the cost of health coverage for people who are healthier. But people in the high-risk pool would pay more.

A policy analysis by the Stefan Gildemeister, the state health economist, showed people in the MCHA system typically paid up to 25 percent more for coverage. He predicted that changes in the health care industry since then would make insurance far more expensive for those in a high-risk pool.