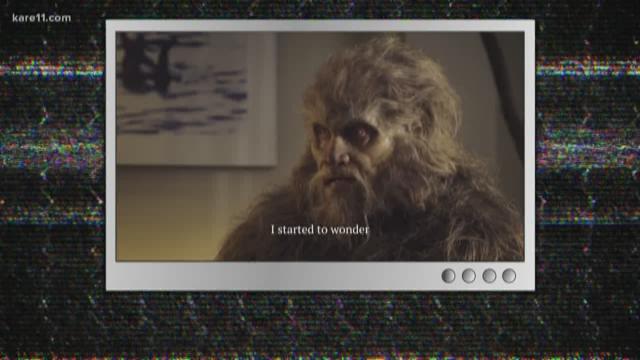 MINNEAPOLIS -- The elusive creature, the blurry photos from a distance -- all the hallmarks of the Bigfoot legend -- are applied instead to a member of Congress accused of avoiding public meetings.

That's the gist of the memorable digital ad by the Dean Phillips campaign, targeting Republican five-term incumbent Rep. Erik Paulsen. Bigfoot, a local actor in Hollywood-quality makeup, explains that he has begun to wonder if Erik Paulsen actually exists.

Phillips, a business owner, is the Democrat challenging Paulsen in Minnesota's 3rd Congressional District in the western suburbs of the Twin Cities.

"It’s an absurd and totally false claim," Paulsen told KARE. "I’m probably one of the most accessible members of Congress."

We can verify that Paulsen held three ticketed town hall meetings in May 30th, but it was the first town hall he'd done in person in seven years. He has, instead, preferred telephone town halls.

Paulsen drew protests from Democrats during those years. A liberal grassroots organization even held a "Paulsen town hall" on their own and invited him but to no avail.

So, when it comes to hosting public meetings in person, the Bigfoot character's claims are somewhat true.

But Paulsen counters he's held at least 100 private meetings with constituents and has kept office hours.

"I’m probably one of only members of Congress that has open office hours, so I’ll meet with folks whether they agree with me or not."

Paulsen points out he has visited scores of businesses and classrooms through the years, so he's hardly been invisible. His critics point out those meetings are rarely advertised in advance, or open to the general public.

But he hasn't exactly been in hiding either. So the Phillips ad is only accurate to a point. It really depends on what type of access 3rd District residents expect.

The fictitious Bigfoot character finds the Paulsen figure at an imaginary pharmaceutical company called "Globopharmia" and grabs some blurry Sasquatch-style footage of him.

That's the ad writer's attempt to assert Paulsen's more accessible to large campaign donors than he is to ordinary constituents.

It's true that Paulsen in the past decade has netted substantial contributions from organizations representing the pharmaceutical industry, the medical technology industry and other corporate interests.

In the 2017-2018 election cycle, Paulsen ranks sixth among all members of Congress in donations from the pharmaceutical and medical technology industry, according to a reports aggregated by OpenSecrets.org.

Paulsen has been a leading voice in the effort to repeal a tax on medical devices, which drew complaints from Minnesota's med tech companies. But he rejects the notion those contributions are in return for votes or carry the expectation he'll vote a certain way in the future.

He recently co-authored a measure that would remove the gag rule insurance companies place on pharmacies, a rule that prevents pharmacists from telling patients a drug is cheaper out of pocket than through insurance.

Phillips, by contrast, hasn't accepted campaign money from PACs. But many outside groups are supporting his cause indirectly with ads that attack Paulsen or promote Phillips.

Phillips is wealthy, as a result of growing up in the Phillips Distilling family and run several companies. But he hasn't self-funded his campaign. He has relied instead on more than 60,000 individual donations.

The 3rd District seat has been held by Republicans since 1960, but the Phillips has attracted more attention and advertised more heavily than Paulsen's previous challengers.