VERIFY: Is there an opossum population explosion in MN?

Having seen a number of them ummm... laying... on roads lately, we decided to see if there really ARE more opossum inhabiting our state. 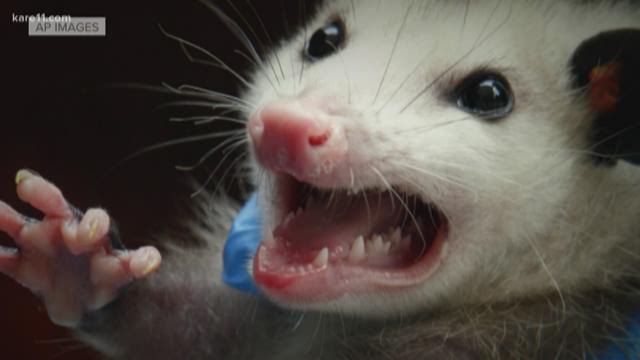 Members of KARE 11's "Grow with KARE" Facebook group tend to be fairly good observers of the world around them, and lately many have mused about seeing more of the furry critters known as opossum.

Having seen a number of them ah... laying... on roads lately, we decided to see if there really ARE more opossum inhabiting our state. KARE's intrepid multi-media wiz Jeremiah Jacobsen went to Minnesota DNR Non-game Officer Lori Nauman in an attempt to VERIFY what many have observed.

First, Naumann did in fact clear up what we call the toothy little rodent. While there is an animal that lives in Australia called the possum, and late country music legend George Jones was called The Ol' Possum, the real name of the critter who calls Minnesota home is the opossum.

Now onto the population thing. While she doesn't have any rock-solid numbers, Naumann says anecdotally the opossum population is thriving. She points to the growing number of opossum seen dead on roads after venturing out on them to eat other dead stuff.

When considering whether opossum are to be considered friend or foe, and whether more of them is actually a good thing, mull over the following:

Want to ask and answer similar questions yourself? Join the "Grow with KARE" Facebook group!