President Trump warns Joe Biden will flood the country with refugees from dangerous countries. That claim omits the historical perspective on refugee admissions. 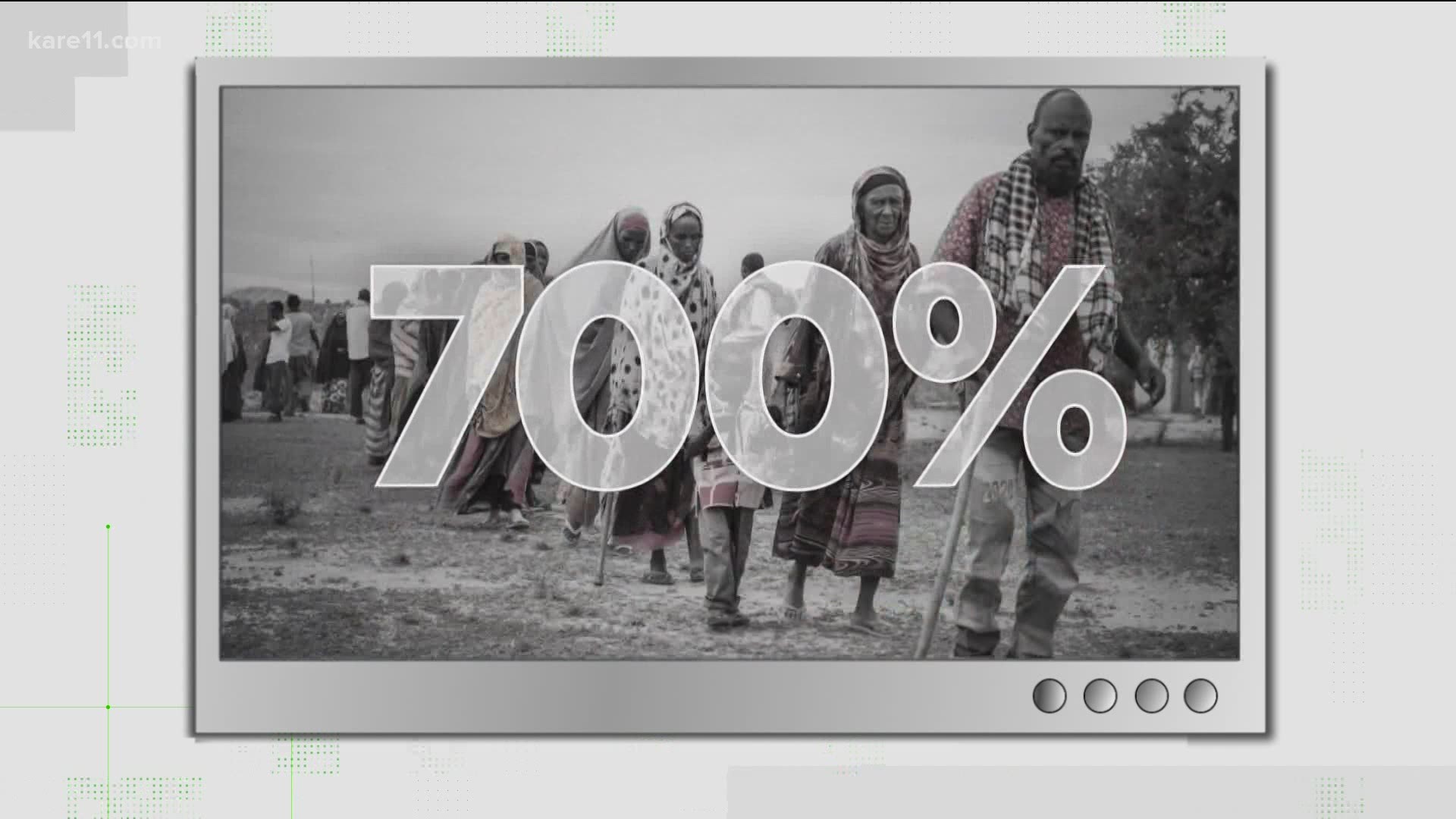 MINNEAPOLIS — In speeches and campaign ads, President Donald Trump has warned that former Vice President Joe Biden would open the floodgates to refugees from the most dangerous countries in the world.

Our assessment is that Biden would allow far more refugees to enter the US than President Trump has, but the overall thrust of the message is misleading due to the lack of context about how vetting works and the pre-Trump history of refugee resettlement in this country.

"He wants to flood your state with an influx of refugees from Somalia," Trump said in speeches in Bemidji and Duluth, giving his description of a refugee proposal from the Biden Campaign and fellow Democrats

"They pledged a 700 percent increase in refugees. 700 percent! Congratulations Minnesota!"

"Increasing refugees by 700 percent from the most unstable, vulnerable, dangerous parts of the world."

What the audience doesn't hear is that a 700% increase over current refugee admissions to the United States would be in line with historical refugee numbers, because President Trump has brought the numbers of new refugees to a record low.

This year so far 10,892 refugees have been admitted to the U.S., according the Migration Policy Institute and State Department Bureau of Population, Refugees, and Migration.

That's where the context comes into play. In 2016, the final year of the Obama administration, the United States admitted 85,000 refugees. That tally varied from year to year but averaged 76,000 per year in the 30 years before Donald Trump became president.

In Minnesota, 172 refugees have arrived so far this year. A boost of 700% would put this state's refugee numbers at 1,376. But, again, that's compared to 3,059 in 2016 and an average of 2,826 new refugees per year in the three decades preceding the Trump Administration.

Former Vice President @JoeBiden has proposed raising the global refugee ceiling to 125,000. Here's how that stacks up against the average refugee caps for the past few decades pic.twitter.com/mGjeaPxtu6

At his Minneapolis rally in 2019, President Trump boasted about cutting the numbers of new refugees.

"I have reduced refugee resettlement by 85 percent!" he exclaimed, prompting a roar of approval from the crowd, and then warned that if Democrats regain the White House, they'd flood the nation and Minnesota with new immigrants.

Compared to other presidents

By contrast, presidents from both parties in the past three decades allowed far more refugees to settle here. Here's the average annual refugee caps by president:

"Our role in resettlement has shrunk and it’s very small compared to the worldwide need," said Ben Walen of the Minnesota Council of Churches, one of six nonprofit agencies that help refugees settle in Minnesota.

"There are 26 million people considered refugees in this world and our country has resettled just a little over 10,000 this year out of ceiling of 18,000."

Where is Joe Biden on refugees?

In his campaign policy statement on immigration, Biden has set a target of 125,000 new refugees per year. That would be 600% higher than the cap President Trump set for this year, but a return to the levels allowed by Presidents George HW Bush and Bill Clinton.

The campaign ads state that Biden will allow refugees to enter America from the most dangerous countries in the world -- highlighting Somalia, Yemen and Syria in bold font.  Those are three of the mostly-Muslim nations covered by President Trump's travel and immigration bans.

But refugees by definition are people who've fled their home countries to escape danger and have sought refuge in other places.

"Refugees, by virtue of circumstances, are actually fleeing form some of the more dangerous countries," Walen explained. "It's not by their actions by but by the circumstances around them they're trying to escape. If we left our community because it became too dangerous it wouldn't make us dangerous."

President Trump has warned that Joe Biden would reverse his ban on travel from those Muslim nations.

"Biden has even pledged to terminate our travel ban on jihadist regions, opening the floodgates to radical Islamic terrorism," Trump told the crowd in Duluth, claiming they'd be unvetted, unscreened and unaccounted for in this country.

Biden has, indeed, pledged to undo Trump's order barring travel and immigration from those countries in north Africa and the Middle East.  But, like all refugees, they'd be subject to an intense vetting process that can take up to two years to complete.

"Refugees are the most vetted type of entrant to the US than anybody," Walen explained. "There are at least 21 different interagency checks that occurs including the FBI counter terrorism force, the Department of Homeland Security. There's engagement with international databases of criminals and biometrics -- including fingerprints, in some cases iris scans and DNA to make sure they know exactly who these people are."

In summary, Joe Biden has pledged to increase refugees admissions sharply compared to President Trump and do away with the ban on immigration from a set of Muslim-dominant nations.

But when one considers the full context of pre-Trump refugee trends and the exhaustive vetting processes in place, the basic claim of the ads -- flooding the nation with jihadists and dangerous immigrants -- can't be verified.

Here's where you can submit a Verify story idea: