Minneapolis police officers who shot a suspect inside their interrogation room when he brandished a knife have been cleared, and the BCA has released the body camera video. 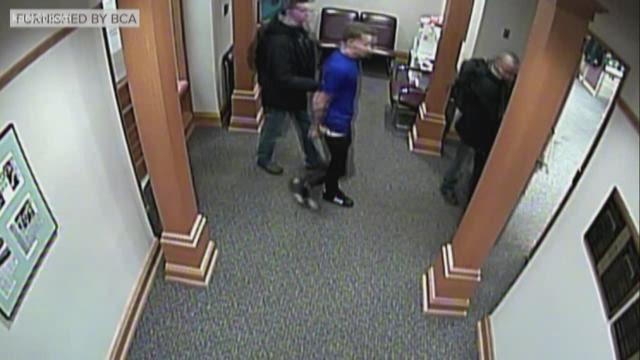 MINNEAPOLIS - On the afternoon of December 8th, officers walked Marcus Fischer into Minneapolis Police Headquarters and questioned him about a shooting.

"We've got more than one person picking you out of a six-person lineup as the shooter," Sgt. Gene Suker and Sgt. Kelly O'Rourke told him.

In the video, Fischer confessed then asked for a drink, and as soon as both detectives left the interview room, he pulled a knife and cuts his own neck.

What comes next is captured on officers' body cameras. For several minutes, detectives pleaded with Fischer to drop the knife while they tried to track down a Taser. According to the BCA report, there wasn't one in all of police headquarters.

Officer David Martinson realized he has one in his car and retrieves it.

They open the door, but his Taser misses.

Suker told BCA agents Fischer ran to the door with the knife. The video, which is blurred to cover the blood coming from Fischer's neck, seems to show him take a couple steps toward the officers.

Watch a composite of the police body cam video. The video contains graphic content and viewer discretion is advised.

The report says Fischer was patted down twice, once when he was arrested and once before entering the interview room, but police never found the four-inch knife hidden in his waistband.

Fischer survived the shots and the slashes to his neck. He pleaded guilty to assault for walking toward police with the knife.

And Washington County Attorney Pete Orput cleared the officers, writing that the shooting was justified.

The shooting was also captured on the interview room surveillance camera. The BCA wouldn't release that.

Fischer's father said he's watched that tape and still believes there was no need for the officers to shoot his son.