Votes are in for Minnesota special elections

Minnesota voters went to the polls Monday for two special elections, to fill vacancies in the legislature. National pundits were watching to see if there's a backlash against President Trump's party. 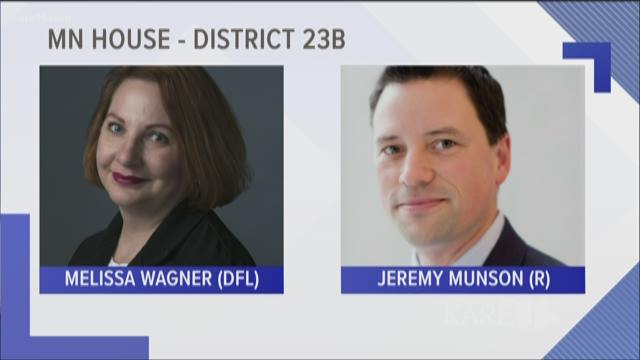 ST. PAUL, Minn. -- The votes are in from two special elections Monday to fill vacancies in Minnesota's state legislature.

The two elections, one in the southeast Twin Cities metro area and one in southern Minnesota, drew attention of national pundits. They're tracking the two races to see whether there's a voter backlash against President Donald Trump, and his fellow Republicans.

The seat opened up when Sen. Danny Schoen resigned in December, after fellow DFL politicians accused him of harassment and inappropriate conduct.

Bigham, who is currently serving on the Washington County Commission, said voters expect the legislature to look out for everyone.

"People I've talked to want us to focus on the priorities of working Minnesotans," Bigham told KARE.

"We've gotta make sure our economy works for everyone, that we have equity and fairness in our tax policies, and that we're generating well-paying jobs and strengthening our education system."

The 54th District has been in DFL hands for a decade, but McNamara asked voters to view him as someone who can reach across the aisle.

"When Governor Dayton wanted his buffer bill, to buffer more waterways, a terrific idea, I along with Representative Torkelson in the Minnesota House got that done with Governor Dayton," McNamara remarked.

Both McNamara and Bigham said voters have expressed being fatigued with divisive, partisan politics.

"They want us to get along, and these issues should not be partisan. Funding a new bridge for Hastings should not be a partisan issue," Bigham asserted. "Six republicans crossed over -- my opponent was not one of them -- and we were able to provide long-term sustainable funding for transportation."

That funding package generated revenue to replace the Hastings Bridge and several others, in partnership with the Federal Highway Administration.

McNamara said he didn't support that 2008 transportation funding bill because of the transit piece. He said he believed the transit funding element favored other counties at the expense of Dakota and Washington County.

"It was a bad deal with us, and that’s why I voted 'no' on it," McNamara explained. "That’s the problem with these bills when they throw so much in there together. And that was a really unfortunate situation."

The election in District 54 has added significance because Republicans currently hold a slim 34-to-32 majority in the Minnesota Senate.

One of those 34 Republicans is Lt. Governor Michelle Fischbach, who automatically became Lieutenant Governor in January when Gov. Dayton appointed then-Lt. Gov. Tina Smith to replace Al Franken in the US Senate. Fischbach plans to remain in the Senate, while serving the final year of Smith's term as lieutenant governor, but that decision has also drawn a legal challenge.

The other special election Monday was in House District 23-B, in southern Minnesota. With 100 percent of precincts reporting, unofficial results showed Republican Jeremy Munson winning over Democrat Melissa Wagner 59 percent to nearly 40 percent. That election was to replace former Rep. Tony Cornish.

Cornish, a Republican, stepped down in December after complaints of sexual harassment from a Twin Cities lobbyist. His district, south of Mankato, has been a solid Republican area for decades.