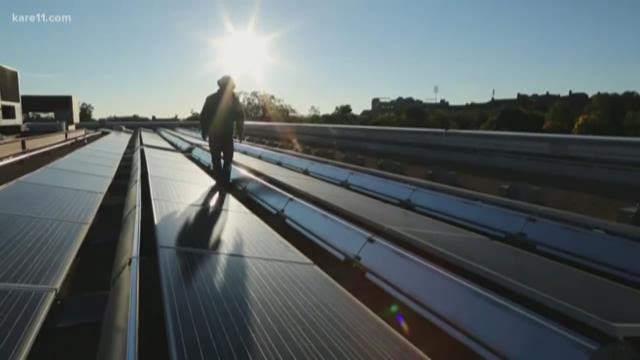 Gov. Tim Walz has set an ambitious goal for Minnesota to get 100 percent of its electricity from carbon-free sources by 2050.

Walz said at a news conference Monday that his clean energy proposals would put Minnesota at the forefront of addressing climate change.

The Democratic governor says his proposals build on the success of Minnesota's Next Generation Energy Act, which passed in 2007 and was signed into law by then-Gov. Tim Pawlenty.

That law required Minnesota utilities to get at least 25 percent of their electricity from renewable sources by 2025.The state achieved that goal in 2017 thanks to the growth of wind and solar power.

"Solar PV installer is the fastest growing job here in Minnesota, and in the past several years solar production and the capacity of the amount of solar that we’re generating here in Minnesota has increased exponentially," Gregg Mast of Clean Energy Economy MN told KARE.

"Today wind energy is the lowest cost resource for producing electricity, and it’s cheaper than coal and also natural gas. And solar is increasingly cost- competitive with natural gas as well."

In addition to wind and solar, the state's other carbon-free sources of electric power include hydroelectric, biomass and nuclear. Republican Senate Majority Leader Paul Gazelka said it would be difficult to meet the 100 percent goal without nuclear.

Commerce Commissioner Steve Kelley said this plan wouldn't interfere with the proposed license renewals of the two state's existing nuclear power plants, but said it would be hard to imagine those two plants still being operating in the year 2050.

Republicans called the goal laudable, but warned it would cause Minnesotans' electric bills to skyrocket without measurable results in terms of global temperatures.

"100 percent by 2050 is going to be very expensive, and the environmental benefits will be negligible," said Isaac Orr of the Center of the American Experiment, a Minneapolis-based conservative think tank.

"The point of the energy industry isn’t to create jobs -- 82 percent of the jobs in the wind and solar fields are temporary construction jobs, so we have to weigh that against higher electricity prices."

XCEL Energy, the state's largest electricity provider with 1.3 million customers, has already set the same goal of going carbon-free by 2050.

The utility issued a statement Monday supportive of the governor's plan, and said XCEL is looking forward to working on ways to implement the goals while keeping customers' bills low and maintaining a reliable system.