"We are outpacing other states," the governor said. "Now is the time for Minnesota to seize the momentum." 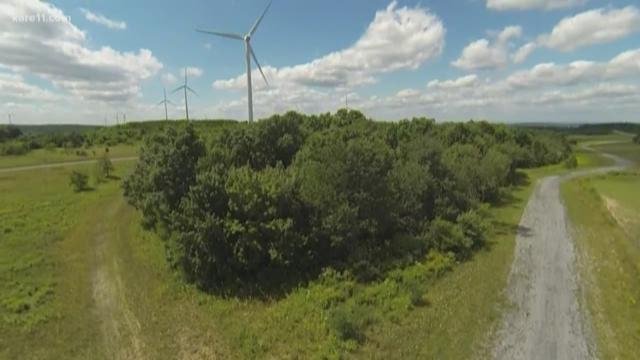 ST. PAUL, Minn. (AP) — Gov. Tim Walz and Commerce Commissioner Steve Kelley said Monday that economics suggest nuclear power won't be part of Minnesota's energy mix if the state adopts the governor's goal of getting 100 percent of its energy from carbon-free sources by 2050.

Walz and Kelley made the remarks at a news conference that they held to celebrate the growth in clean energy jobs in Minnesota.

"We are outpacing other states," the governor said. "Now is the time for Minnesota to seize the momentum."

The governor set the ambitious carbon-free goal last month in hopes of building on the success of Minnesota's Next Generation Energy Act, which passed in 2007 and was signed into law by Republican Gov. Tim Pawlenty. That law required Minnesota utilities to get at least 25 percent of their electricity from renewable sources by 2025 to reduce greenhouse gas emissions. The rapid growth of wind and solar power helped the state largely achieve that goal two years ago.

The carbon-free standard is part of a broad energy and climate policy bill that passed a committee Friday in the Democratic-controlled Minnesota House. But the idea is stalled in the GOP-controlled Senate. Minneapolis-based Xcel Energy, which operates the Monticello and Prairie Island nuclear power plants, has set a similar goal but hasn't decided if nuclear should remain one of its sources after the plants' licenses expire in the 2030s. Officials from smaller Minnesota utilities testified last month that they can't meet the goal.

Kelley said the governor's proposal doesn't take a position for or against nuclear power. While it allows for the possibility that nuclear could be part of the state's energy portfolio in 2050, the commissioner said the odds at the moment are against it.

"Just as a realist, looking at the cost of new nuclear power plants, unless there's a radical change in technology sometime in the next decades, it does not look likely that it will be cost-effective to invest in new nuclear in Minnesota," the commissioner said.

Walz endorsed Kelley's statements and added he wants to see a solution to long-term nuclear waste storage, noting that Xcel stores spent fuel in above-ground casks next to the small reservation of the Prairie Island Dakota tribe because the federal government has failed to establish a permanent disposal site.

Walz held the news conference to draw attention to an annual report released Monday by the industry group Clean Energy Economy Minnesota that said more than 61,000 residents now work in clean energy industries, an increase of over 2,700 jobs in 2018 for a growth rate of 4.7%. The report said Minnesota led the region in renewable energy job gains, especially in wind and solar.

"This is Minnesota's future but it didn't happen by chance," the governor said, pointing to the 2007 law. "We need to be deliberate in how we go about things."

The Center of the American Experiment — a conservative think tank that says a higher renewable mandate would kill jobs by driving up energy prices — countered in a statement that the report's claims of clean energy job gains were artificially inflated because it counts jobs that are "only loosely related" such as installers of energy-efficient appliances.