Wandering ‘beast' of a bog wreaks havoc on Minnesota lake

“There’s never been one ever seen this large before,” says Bill Schmidt, president of the lake association. “It’s kind of the wild beast of North Long Lake right now.” 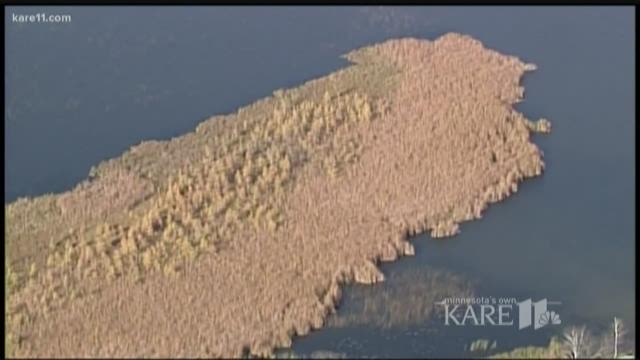 MERRIFIELD, Minn. - North Long Lake is a long way from Loch Ness. But the Brainerd area lake now has its own monster.

“There’s never been one ever seen this large before,” says Bill Schmidt, president of the lake association. “It’s kind of the wild beast of North Long Lake right now.”

A floating bog – the size of three football fields – broke off from shoreline late last week and started wandering.

“When it was out in the middle of the lake and the wind was blowing, it was just a monster coming at you,” says Schmidt.

Indeed, the crumbs of several smashed docks are now part of the traveling bog.

“Came down this way and just crushed these docks,” says Schmidt, pointing at the remnants of one such dock.

Jeff and Kathy Coombs will be getting their boat lift off the lake tomorrow.

“We saw what it did to the neighbor’s docks and lifts and no way do we want that to happen to ours,” said Jeff Coombs.

“There’s cattails in there, there’s bulrush in there,” said Schmidt. “There’s probably even a hundred trees in there. We’re looking for help on how would you take this thing and put it back where it belongs and anchor it.”

Tow trucks and thousands of feet of cable were twice used to move and anchor a large wandering bog in Barron County, Wisconsin, most recently in 2011.

On Monday, calm winds allowed the bog to settle on one end of the 6,000-acre lake. In the short term, Schmidt says lake property owners need “a lot of prayers, that it stays here.”

North Long Lake has already had enough of its beast of a bog.