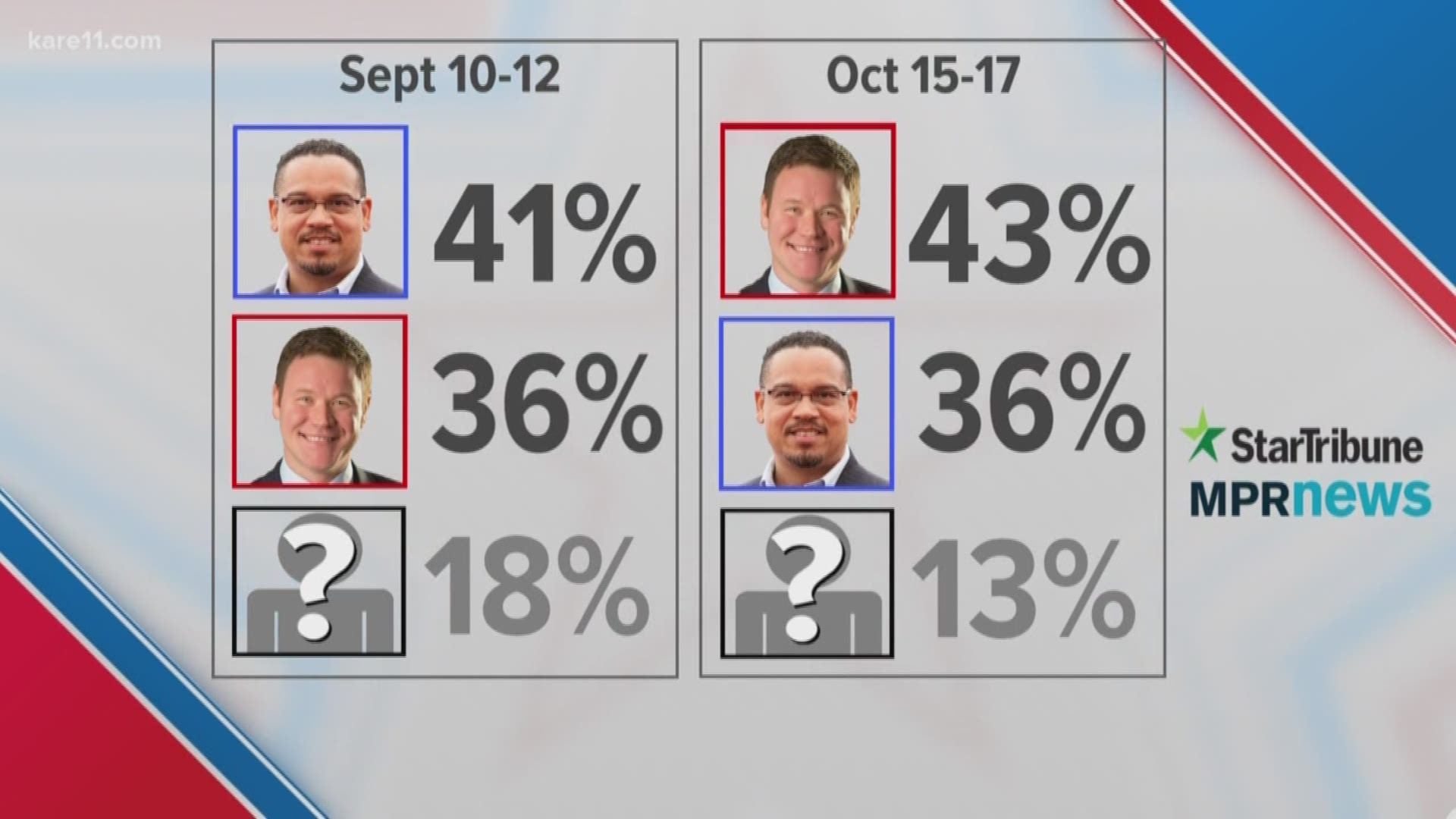 ST. PAUL, Minn. -- Democrat Keith Ellison said he'll work even harder to win over voters, in the wake of a new poll showing he now trails Republican Doug Wardlow in the race for Minnesota Attorney General.

"The polls are going to impact me by having me work a heck of a lot harder," the 5th District Congressman told reporters Tuesday. "But let me tell you. the only poll that matters is the one on November 6th."

The Minnesota Poll, commissioned by the Minneapolis Star Tribune and MPR News, found Wardlow leading Ellison by a tally of 43 percent to 36 percent, with 13 percent undecided. The poll of 800 likely voters was taken Oct. 15 to Oct. 18, before Ellison's divorce records were unsealed and showed he never abused his ex-wife, Minneapolis School Board member Kim Ellison.

The same Minnesota Poll, taken in mid-September, had Ellison up 41 percent to 36 percent over Wardlow, a former state lawmaker and attorney who specializes in constitutional religious freedom cases. In that September poll, the undecided segment was 18 percent.

Ellison, who has served six terms in Congress and is deputy chair of the Democratic National Committee, has been targeted in scorching TV ad campaigns accusing him of domestic abuse. It's based on an accusation leveled by Ellison's former girlfriend, Karen Monahan, who said Ellison tried to yank her out of bed during an argument in 2016.

The Congressman has denied it repeatedly and asked for investigations to prove his innocence. The only formal probe done thus far, an independent investigation commissioned by the DFL Party, found that Monahan's complaint could not be substantiated due to lack of direct evidence.

Monahan has identified her attorney as Andrew Parker, who hosts a conservative talk radio show and once headed the law firm of Parker Rosen, where Doug Wardlow spent half of his legal career.

The Wardlow campaign reacted to the new poll numbers by taking another swipe at Ellison.

"This new poll confirms what we have been saying throughout this campaign,” read a statement attributed to Wardlow consultant Kory Wood.

“The more closely Minnesotans look at Keith Ellison, the more disturbed they are by what they see."

Ellison made his remarks at an event to show support for current Attorney General Lori Swanson's decision file a lawsuit against three drug makers over the skyrocketing price of insulin.

Among those who spoke at the Ellison event was Nicole Smith-Holt, whose adult son died from side effects of diabetes while trying to ration his insulin.

"And I really, truly think that because he was still new in his diagnosis, that he did not know the full effects of what would happen to his body, rationing his insulin," Smith-Holt told reporters.

"I think he maybe thought he’d feel ill from not getting enough, but I don’t think he truly knew he would die from it."

Ellison said he's doing his best to get voters to focus more on the issues they face, rather than the personalities in the race.

He noted that Doug Wardlow's current employer, Alliance Defending Freedom, has filed many lawsuits aimed at toppling the Affordable Care Act or aspects of it.

Wardlow has said the Attorney General office shouldn't be used to challenge the Trump Administration, and he has warned in TV ads and mailers that Ellison will do just that.

When asked about lawsuits the Republican attorneys general brought against the Obama Administration, Wardlow said his goal will always be to follow the law.

Ellison said he'd put Minnesotans first, and if they're harmed by something happening at the national level he won't hesitate to join other states in cases against the White House.

Wardlow said his goal is to remove politics from the office of the attorney general, and to hire attorneys that will make it a priority to follow the rule of law. Wardlow was captured on audio tape saying he'd "fire 42 DFL attorneys" from the AG's office if he's elected.