We all whine about the cold, but what about the wine?

Minnesota wine grapes are designed to survive the cold, but is this cold too much for them? 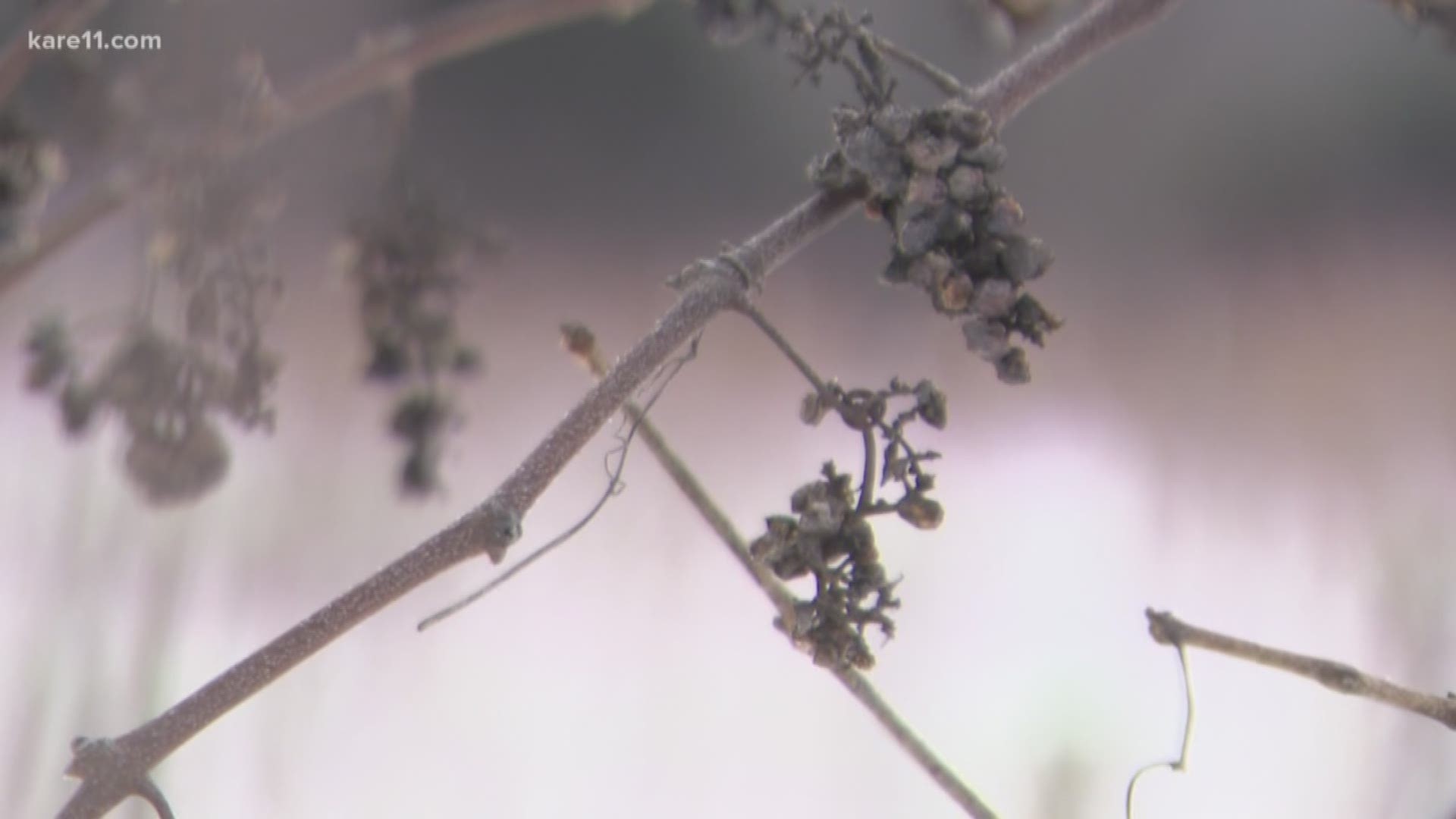 CHASKA, Minn. — To survive Minnesota winters, it takes a special kind of person, strong bones, deep roots and thick skin, something Minnesota grapes have in common.

"You can certainly grow other grapes, but they're not going to do very well here," U of M grape breeding specialist Matt Clark says.

Many of the classic wine types - Chardonnay, Merlot, Riesling and Cabernet - have a tough time growing in Minnesota.

So, a few researchers at the University of Minnesota decided, hey, why not create our own grapes?

"The university has been breeding grapes for almost a hundred years, I would say. Starting with grapes for jams and jellies and focusing more on wine grapes more recently as demand increased,” Clark explains.

The university’s research vineyard in Chaska features more than 10,000 vines. Of those 10,000 new species, Clark says maybe one of them will go on to make a good tasting wine.

"It's sort of like playing the lottery,” Clark laughs. “Every year we make between 50 and 150 new wines from them and then we start tasting them."

If they taste good that's one thing, but they also must survive the cold.

So far only six grape species have passed this rigorous test.

"We have Frontenac, Frontenac Gris, Frontenac Blanc and then we have Marquette, La Crescent and now Itasca."

These grapes are now used by wineries across the country, from Washington State, to Vermont.

“They’re also used in Canada and even in Europe and other parts of the world,” Clark says.

And they're all fairly new. Frontenac was the first grape species the U of M released specifically for winemaking.

Frontenac was officially released in 1996. That year may ring a bell for you; it’s the last time temps were this cold.

“None of these grapes have seen weather this cold before,” Clark says. “The vines are going to suffer a bit even though we’ve been developing them for cold climates like this.”

On paper, these six species can survive temps as low as -35 degrees, but in reality, none of them have actually seen those temps before, until now.

"We're fortunate these events don't happen very often. Once in a generation is good. If this happened every three to five years our industry would really be affected.”

Clark says it's tough to say how many vines vineyards will lose.

Owners will be able to save some of them with pruning and protection, but a lot of them won't make it.

So they'll have to spend money to replant vines and won't have as much wine to sell.

"There might not be enough, that's always a concern I think every year."

Most of the wineries will rely on imported grapes from California and other states to get by.

For them, this cold is costly, but for researchers like Clark, it's helping them build a better grape.

"I have a colleague here this morning who was pretty stoked about what this was going to do. It helps us make our decisions and prepare grapes for the future.”