'We were sort of stunned': 2 snowmobiles spotted near trail with no snow

Two people on snowmobiles were spotted on July 3 near Independence Pass, which is not allowed even if there was snow. 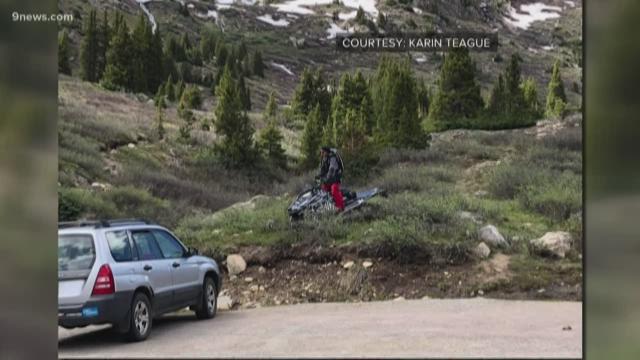 ASPEN, Colorado — Law enforcement has been notified after two people were spotted on snowmobiles in a wilderness area near the summit of Independence Pass on July 3, a spokesperson for the White River National Forest said.

Three ecologists were taking part in a hike to gather information for a study near the summit of Independence Pass when they were interrupted by the snowmobilers.

"We were in the parking area when two snowmobilers came ripping down the tundra, the bare tundra, toward the parking lot," said Karin Teague, the executive director of the Independence Pass Foundation. "We were sort of stunned like we were in the middle of some crazy movie or something."

Teague and two colleagues were conducting a study about the bloom times of flowers on the pass which is near Aspen.

They were in the area near the Upper Lost Man trailhead, which Teague said is about 1.5 miles from the summit. There was no snow in the area at that elevation and even if there had been snow, motorized vehicles aren't allowed in wilderness areas, according to the U.S. Forest Service.

"There is no motorized use allowed on Independence Pass outside of the road corridor," Teague said. "So they didn't know what the [regulations] were or they were ignoring them."

9NEWS has reached out to local law enforcement for more information on the incident.

The potential damage caused by the snowmobilers could last a long time.

Credit: Karin Teague
A snowmobile was spotted July 3 on Independence Pass near Aspen.

"There are alpine flowers that literally take hundreds of years to grow because of the harsh conditions in a place like Independence Pass that has a very short growing season," Teague said. "It really just takes a couple of folks like these to create some long-lasting damage to the landscape."

Teague said the snowmobilers claimed they were allowed to be there, so she's encouraging everyone to know the rules before they do any outdoors activities.

"All those rules are there for good reason, and we just need people to take a little time and personal responsibility to educate themselves...to share and enjoy this beautiful place if they do that," Teague said.

"This incident and related photos involving 3 individuals operating snowmobiles without visible snow in a Designated Wilderness area does not reflect the Colorado community of tens of thousands of snowmobilers in any manner. Rather this behavior is exactly the opposite of the community represented and is deeply troubling. As partners with federal, state and local managers in maintaining great recreational opportunities, we support strong environmentally friendly regulations as it pertains to state and federal riding areas.

“We are fully cooperating with law enforcement efforts from the US Forest Service and are helping to identify the individuals in these pictures and ensure they are prosecuted to the fullest extent of the law," said Scott Jones, executive director of the Colorado Snowmobile Association.

"Our organizations work diligently with public land agencies to ensure access and responsible recreation and as such, we do not condone behaviors that damage the natural resources of Colorado," Jones added.