Recreational marijuana is officially legal in Maine as of Monday; adults 21 years and older can now use and possess two-and-a-half ounces of weed. 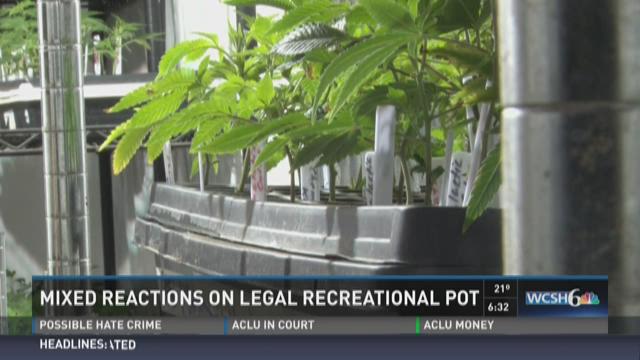 AUGUSTA, Maine (NEWS CENTER) — Recreational marijuana is officially legal in Maine as of Monday; adults 21 years and older can now use and possess two-and-a-half ounces of weed.

They can also legally grow up to six mature plants and 12 immature plants. Retail sale of cannabis will be allowed when the moratorium ends in February 2018.

The Gold Room in Portland will be the site of a victory celebration Monday night. Supporters of Legalize Maine and those with the Yes on 1 campaign will attend a private event called "The End of Prohibition" party. However, not all those close to the issue are in favor of the new law.

Full Bloom Hydroponics and Gardening Center, which also houses the Cannabis Seed Bank of Maine, is an established and licensed provider of cannabis seeds and immature plants whose owners urge education and walk new clients through the initial growing process. The store's primary clients are medical marijuana caregivers. While the owner, Zachary Dulac, says the legalization of recreational marijuana does open up his business's market and calls and orders have been increasing, he worries the state rushed into something it's not ready for.

Related: Gov. LePage: Maine should 'get rid of medical marijuana'

Dulac is concerned recreational marijuana will eventually push out the medical marijuana industry and destroy the livelihoods of those growers. If that happens, he worries children under the age of 21 will not get the medical cannabis they rely on.

"If the recreational becomes so popular, do they stop the medical end of it?" he asked. "Are patients going to be forgotten? Is it just going to be about the weekend party versus truly helping someone, maybe a little girl that has seizures."

Dulac is especially concerned underage patients will definitely suffer if the oversight of recreational marijuana is officially passed over to the Bureau of Alcoholic Beverages and Lottery Operations, as Governor LePage signed an executive order to do just that last week.

"I understand why he did it," Dulac said. "He's trying to protect the youth from picking up a pot habit too soon. But the problem with signing that is that there is some youth out there that definitely need it. So, by him making it [people under 21] cannot posses, if they drop the medical end of it, they won't have access, it'll be against the law for them. So, something has to stick on the books to protect kids under 21 that do need it."

For now, Dulac said he is looking forward to the money being spent on cannabis products locally and returned back into the local economy here in Maine.