Edina High School's Young Conservatives Club is suing the district with a claim of violating their first amendment rights, after members criticized protesters who sat during a Veteran's Day ceremony playing of Taps. 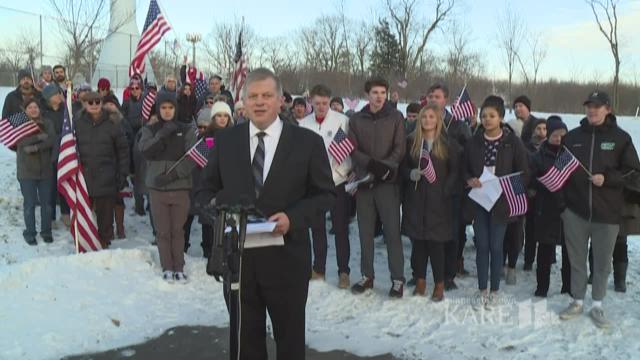 And as most in the gym stood during the playing of 'Taps,' about 11 students stayed seated. It was captured on cell phone video.

"And the fact the school administration allowed this disrespect with zero accountability is the reason we are here today," said Nick Spades, President of the YCC.

In the suit, they claim the principal shut down their club for criticizing the Veteran's Day protest.

"He indicated the reason the club was disbanded was that they disrespected protesters," said Erick Kaardal, attorney for the students.

Kaardal admits some former members of the club made racial remarks in their criticism of the protest.

"I think the criticism was some of the students were immigrants. They should go back to their home countries," Kaardal said.

The suit also states conservative ideas are silenced in the school and these kids are treated differently than those with liberal political beliefs.

"I have been harassed. Called ignorant, felt demeaned by the fellow students. All for my conservative values. It seems like race and politics are woven throughout every aspect of Edina high school," said Jazmine Edmond.

The school district would not comment on the lawsuit. But the district's attorney wrote in a letter to the plaintiffs, "I would encourage you to please research this issue thoroughly prior to filing a lawsuit, and to remove this frivolous claim."