Settergren Hardware of Linden Hills is raising money so they can set up a statue of Jager, the late shop dog who was loved by all. 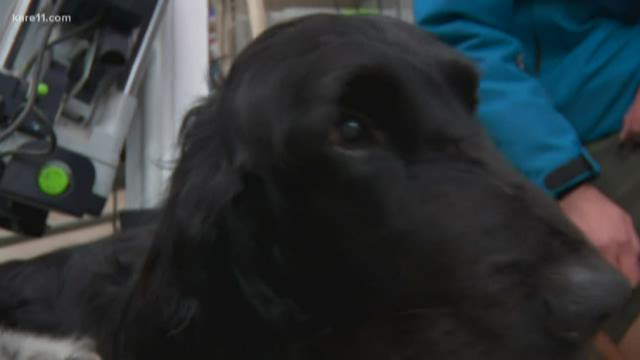 MINNEAPOLIS — A few can deny, that life is better with a dog in it. When that dog inevitably passes on, we do our best to keep him or her in our memories.

Settergren Hardware of Linden Hills is trying to the same, by memorializing their late shop dog, Jäger.

When a store in a neighborhood becomes a staple, like Settergren Hardware has in the Linden Hills neighborhood, the owner of the store is no longer the owner. The store, really, belongs to the people.

"This is my 46th year working at Settergren," Mark Settergren said. "I'm fourth generation. It's what we are. That community place--we like to be that community hub."

Settergren Hardware, over the years has become that kind of place where an absence is noticed. That's why Jäger's absence is more pronounced than ever.

Anyone who walked into the store for the past 13 or so years would have noticed Jäger. Jäger was a 75 pound Munsterlander hunting dog. Settergren said he was a fabulous hunter out in the field. He was also a fabulous companion for many, when he was inside the store.

In fact, Jäger was so friendly that he was dubbed the unofficial mayor of Linden Hills.

"His attitude--of knowing what you were thinking? That was one of those dogs," Settergren said.

No matter what it is that you were looking for inside the hardware store, with Jäger there, you'd walk out with a smile, guaranteed.

"It was also just great for people to have that small town feel in the big city," Settergren said. "They just really enjoyed it. A lot of dog lovers. But it was good for myself and for the dog. He was with somebody non-stop."

They say that with a dog, you have many good days and one bad one. So when Jäger passed away, Settergren decided he couldn't bear not having Jäger around.

"The neighborhood has gotten together to build a statue, a bronze statue of him to celebrate his life," he said. "All the memories he put out there in this world, he'll be out in front of the store. Kids can come back and see the dog they saw when they were young kids."

As soon as you walk into the store, you'll notice a sign that bears Jäger's photo along with the words, "loved by all, loved them back." Those words, could not be truer.

"It was just the people, the kids, everybody, so it was a great way to have a dog," Settergren said.

To continue his love (and the neighborhood's love) for a shop dog, Settergren said he has brought in Jäger's grandson to be in the store. Jurgen is also a Munsterlander pup who, according to Settergren, takes a lot after his grandfather, Jäger.

Settergren said they are fundraising with the goal of raising $10,000. The Linden Hills Neighborhood Association said if the fundraiser reaches $9,000, they will pledge the last $1,000 to make the project happen.

You can find the link to that Gofundme here.