GameDay host Rece Davis and the rest of the broadcast team arrived in Minneapolis on Friday and said they were happy to see snow on the ground and in the forecast. 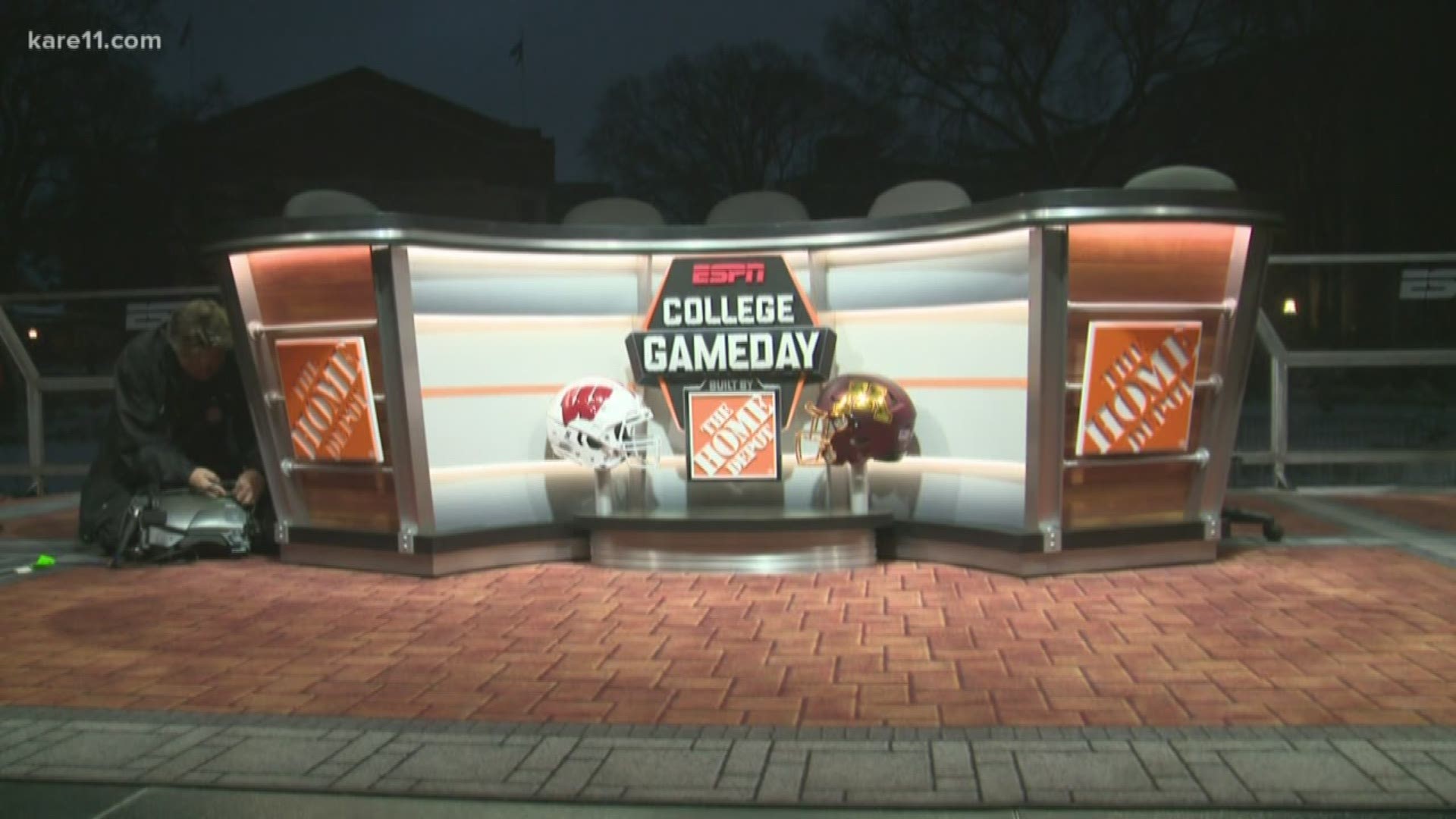 MINNEAPOLIS — With the ESPN College GameDay all set to begin broadcasting at 8 a.m. Saturday from the University of Minnesota’s Northrop Mall, some Gophers fans spent Friday night putting a game face on a snowman.

"We've got to get a smile, you know what I mean? Just making it look pretty I guess,” said Minnesota senior Austin Wilhelm. “The ESPN crew is here and all I've been telling them is welcome to Minnesota. This is very Minnesotan weather.”

GameDay host Rece Davis and the rest of the broadcast team arrived in Minneapolis on Friday and said they were happy to see snow on the ground and in the forecast.

"It's the perfect place to be. I'm hoping it snows,” Davis said. “I know very few people ever say that. I'm not in for the sleet and the freezing rain. You can count me out of that.”

"I love the weather,” said ESPN analyst Kirk Herbstreit. “I'm an Ohio guy, so I hate the heat and humidity. It cannot be cold enough for me. The more snow, the more ice, the better."

Besides the memorable weather, the broadcast team is excited about seeing the Gophers play such a meaningful game in late November.

"It's always cool to take the show new places and when it's not a novelty,” Davis said. “We're here because they're good and they're playing for something."

"To be here and call this game with what's on the line, man, that is what you do this job for,” said Chris Fowler, who will call the game on ABC. “I just hope that it's a great show."

Before the season, not many experts predicted that the winner of this border battle would take home the Big Ten West in addition to the axe, but Herbstreit did see elite potential.

Kent Erdahl: "Preseason, did you pick the Gophers as your sleeper?"

Herbstreit: "Yeah, I picked Wisconsin to win the (Big Ten) West and Minnesota as my sleeper."

Herbstreit: (laughing) “When you go back to August, everybody was talking Nebraska, and if you looked at Minnesota, they had a lot of talent, but you just didn't know how they would gel… But of course, if I'm in Minneapolis and they're playing at home, of course I would reconsider and pick the Gophers, right?"

Minnesota will also surely get the nod from former Gophers receiver Eric Decker. On Friday, Davis revealed that the all-time leader in receptions and receiving yards (for now) will join the desk as celebrity guest picker at the end of the 3 hour broadcast.

"(Decker) is someone who identified well with the team, the university and the region,” Davis said. “He's willing to come in the snow and make picks with us, so that's always a good sign.”

Another good sign? The GameDay crew all agreed, Minnesota is one of the few teams left in college football that likely control their own fate.

"It's all in front of them. If they beat Wisconsin and they beat Ohio State, I think they're going to the playoffs,” Davis said. “It's going to be hard to keep you out, so everything is in front of you."

Despite all the talk of snow, rain and even sleet, the one weather element that could hamper the outdoor broadcast is wind. Safety officials will be monitoring wind speeds, and if it regularly tops 30 miles per hour, the broadcast could move to a temporary set on the stage inside Northrop Auditorium.