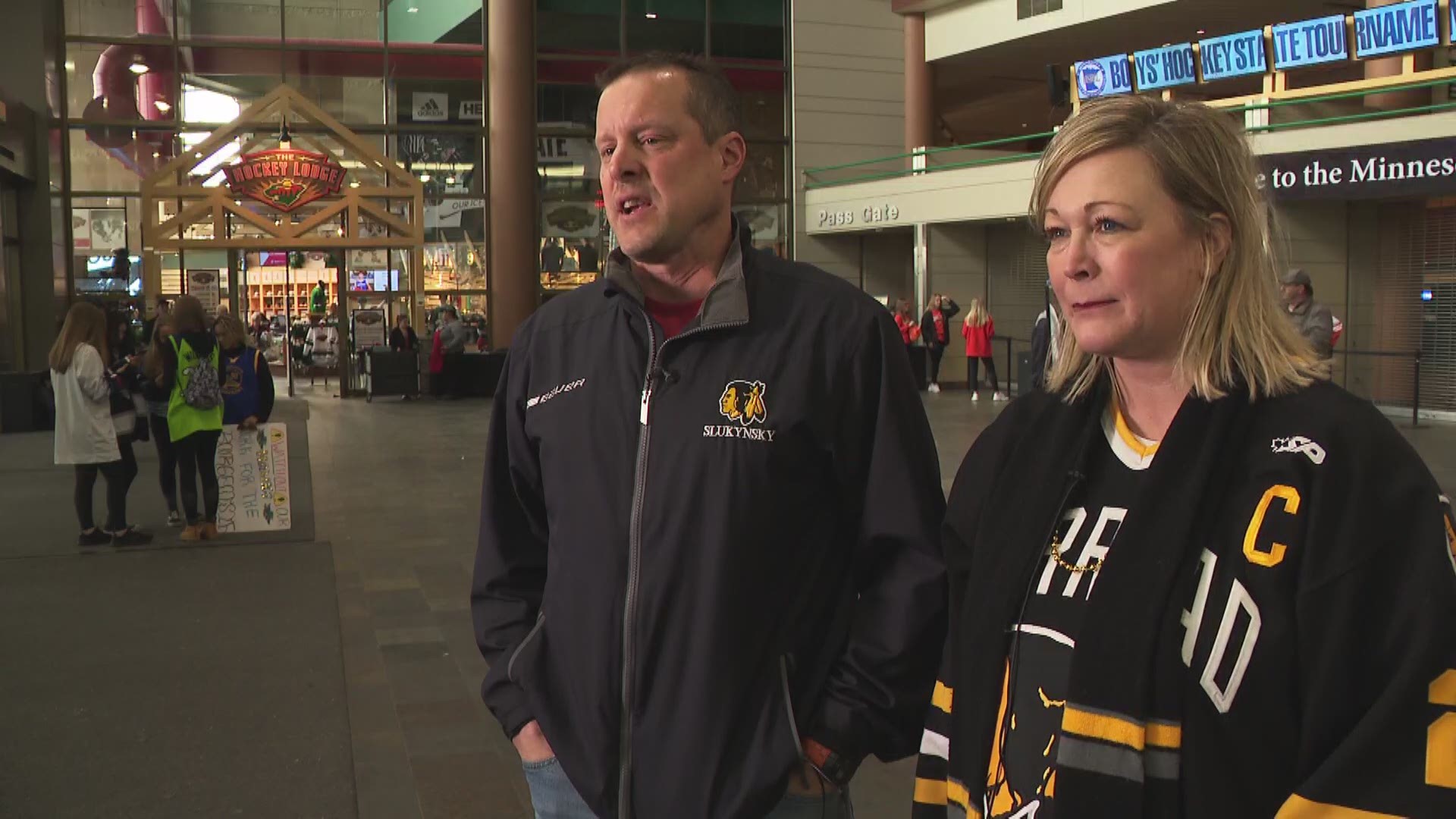 ST PAUL, Minn. — A familiar sight developed in the capital city on the first Wednesday of March.

Hockey fans from across the state, stretching from the Canadian border to the tip of Lake Superior to southern Minnesota, congregated inside the Xcel Energy Center in downtown St. Paul for the opening day of the state boys' hockey tournament. The four Class A quarterfinal games, featuring the schools with the smallest enrollments, carried a special kind of charm.

"It's a really big deal," Delano senior Ella Madson said. "Basically our whole entire town leaves everything they're doing, just to come to this game tonight."

Madson and four other seniors, all wearing Tiger orange, crowded the gates two hours early after leaving school at 1:15 p.m — and their Class A opponents matched that passion. Two senior boys from Hermantown took the day off entirely to drive two hours from the Duluth suburbs. Parents and students from St. Cloud, Monticello, Hutchinson and Mankato trekked anywhere from 50 to 100 miles. And the Slukynsky family traveled more than six hours from Warroad, the famed hockey community in far northern Minnesota, to see their son Grant compete in the Warriors' first state tournament in a decade.

"It's big. It's the big stage," Grant's dad, Tim, said before his son's quarterfinal game. "Hockey is in the DNA of Warroad."

Known across America as the place that produced Gigi Marvin, T.J. Oshie and multiple members of the Miracle on Ice team, Warroad routed Hutchinson 9-3 in the Class A quarterfinals on Wednesday as Grant Slukynsky scored the first goal in the opening 30 seconds of the game. The Mr. Hockey finalist, who has committed to play for Northern Michigan University, could be the next future star of a tournament that has produced so many legends over the years.

"We're focusing on the present," father Tim said, "and we hope to make some history of our own this week."

That's the appeal of the tournament, which dates back to the end of World War II and annually showcases the best that the "State of Hockey" has to offer.

Jeff Emerson, an Anoka native who now lives in St. Michael, has attended the state tournament for 40 years and remembers watching the competition at the old St. Paul Civic Center.

"This is kind of the end of winter. People get excited to come downtown," Emerson said. "When we come to tournaments, we see people that we only see at the tournament year after year. We sit in the same seats, and catch up with our families."

After the Class AA quarterfinals on Thursday, both divisions will hold semifinals on Friday and the championships on Saturday. Tickets are still available for each day, although demand should only continue to increase — especially without any inclement weather in the forecast.

Fans from far-away communities like Warroad plan to stay in the Twin Cities until the end of the tournament, whereas others — like seniors Jeb Paczynski and Reid Ehle from Hermantown — will drive back home before returning on Friday. Hermantown defeated Monticello 7-1 in the quarterfinals.

"It's crazy. The atmosphere is just nuts and there's so many people here. There's people from everywhere," Paczynski said. "Hopefully, we can pull it out and get a championship."