The game pitted two of the Big Ten's three undefeated teams against each other. 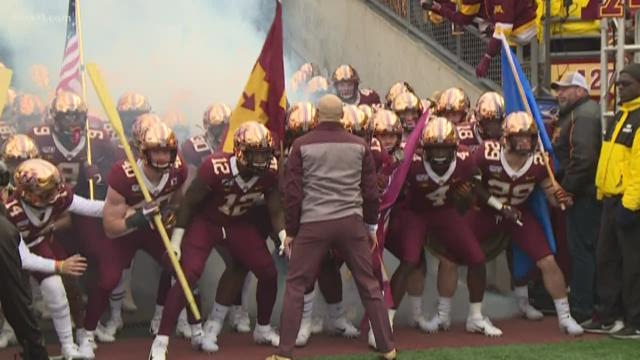 Excitement for Saturday's game led to the team's first sellout of TCF Bank Stadium since 2015. The Gophers entered the game ranked 13th in the weekly Associated Press Top 25.

Minnesota's Jordan Howden picked off Sean Clifford in the end zone with 1:01 left, the third interception thrown by Penn State's quarterback, and the 13th-ranked Gophers held on for a 31-26 victory on Saturday afternoon over the fifth-ranked Nittany Lions for their first win over a top-five team in 20 years.

Tanner Morgan passed for 339 yards and three touchdowns to direct a dismantling of Penn State's staunch defense, as Minnesota (9-0, 6-0, No. 17 CFP) not only remained undefeated but stayed on track for its first trip to the Big Ten championship game.

The first sellout crowd for the Gophers at home in four years swarmed the field after the clock ran out, reveling in the biggest step forward yet under coach P.J. Fleck in his third season. The Gophers scrambled the College Football Playoff picture, too, after Penn State (8-1, 5-1, No. 4 CFP) emerged with a top-four spot in the first edition of the rankings.

RELATED: Maroon and Gold ahead of Gophers game against Penn State

Check out more sports videos on our KARE 11 YouTube channel.