Second wave of Gopher fans will head to Des Moines 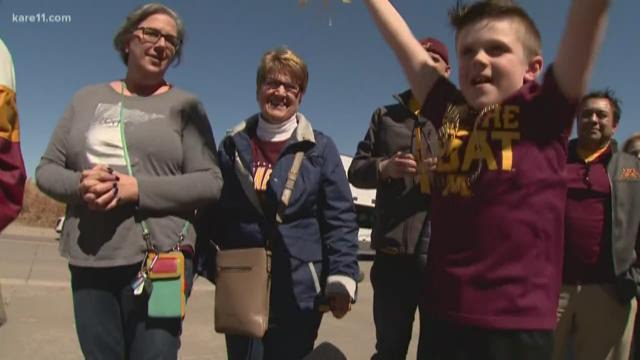 So he texted his son, a student at the U, to see if he'd be game for a road trip.

"He said 'yes,'" Miller said. "It'll be a good father-son bonding time. And it's probably the only time in my lifetime there's a close second-round game to go to."

For that reason, the second wave of Maroon and Gold may be making their way down to Des Moines on Saturday to see the 10th-seeded Gophers face second-seeded Michigan State at Wells Fargo Arena at 6:45 p.m. CT. Minnesota had a sizable contingent on Thursday, but now it's the weekend — and a night game, at that — meaning plenty more fans from the state of Minnesota can head south.

Spencer Krier, Quinn Rarick and Josh Durand will all make the trek on I-35 together. Spencer and Quinn are Gopher fans; Josh is a Michigan State fan originally from the state of Michigan.

Still, they'll be sitting together.

"Depends on the first half score," Josh said with a laugh. "I might move."

Spencer said the three friends hoped this match-up would come to fruition after seeing the bracket revealed last week.

"We were just like, 'oh my gosh, if both of us get through, we're going on Saturday,'" he said. "No question."

There are still tickets available, but they'll cost you a bit. On the secondary market like StubHub, tickets for the session in Des Moines are running for at least $80 a seat (fees not included). That includes two games. Through the NCAA's site, it may cost a few hundred bucks at least.

"For a last-minute, impulsive decision," Quinn said, "it worked out. It's definitely worth it."