Get to know the Gonzaga men's basketball team during March Madness

If you're just tuning in to the Zags this season or need a refresher, here's what you need to know about members of the team before the NCAA Tournament. 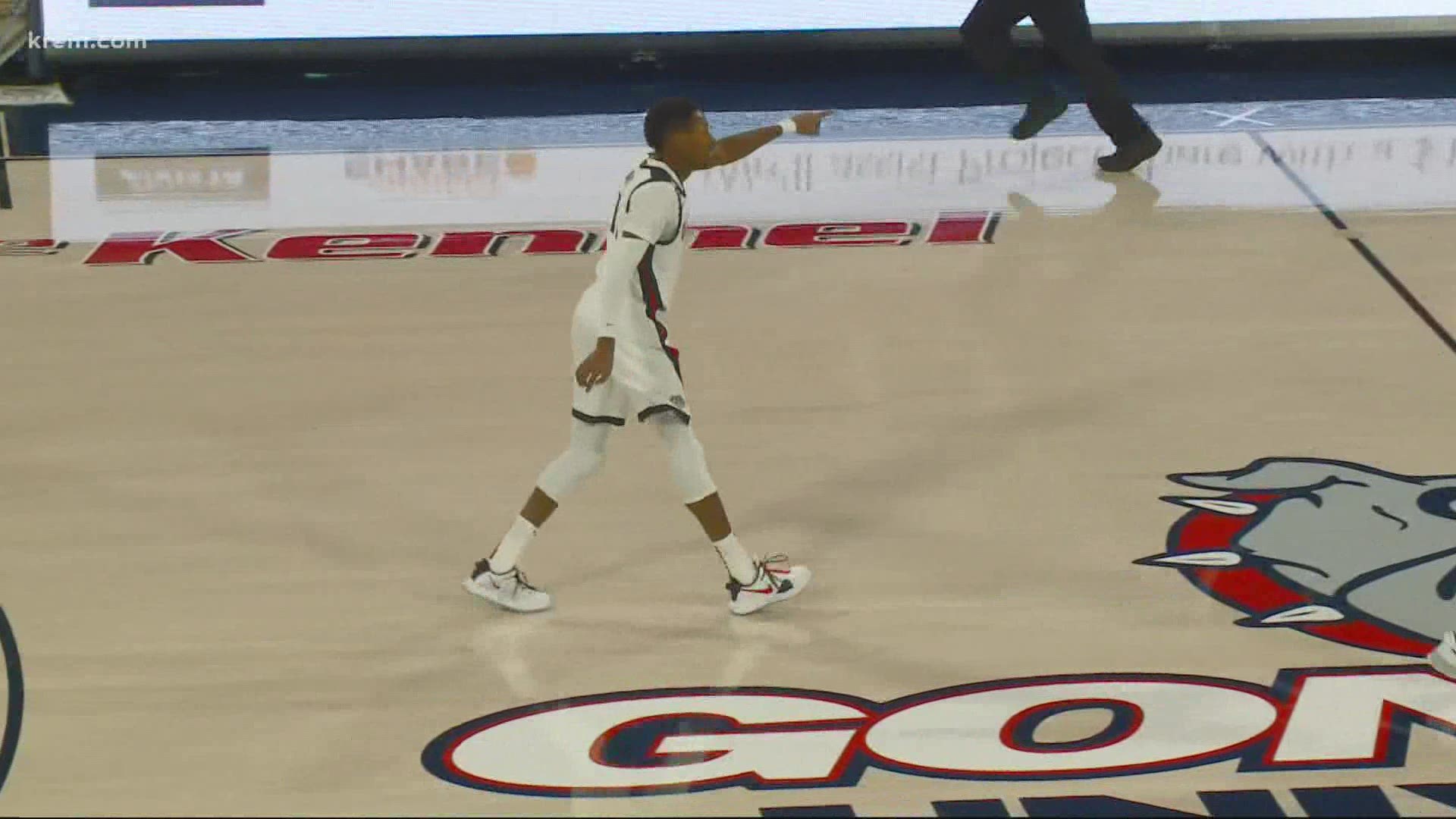 SPOKANE, Wash. — Gonzaga men's basketball is the overall No. 1 seed in the 2021 NCAA Tournament following an undefeated regular season and through the West Coast Conference Tournament..

This team is loaded with talent that has lit up the court on many occasions with a high-powered offense and solid defense. As the tournament approaches, here is what you need to know about the head coach Mark Few and the players.

Mark Few is the winningest head coach all-time in NCAA D-I. This is season number 22 for him at the helm for the Bulldogs. He's led them to heights they've never reached with the chance to finish the season undefeated and for the program's first national title. Few has the most wins of any coach at Gonzaga and eclipsed the 600 win plateau this season. He's led this team to five straight Sweet 16 appearances and a national title appearance in 2017.

Corey Kispert is a finalist for the Naismith Julius Erving Award, which is given to the nation's best small forward. He was also named West Coast Conference Player of the Year and an All-WCC First Team Selection. He ranks third in the country in three-point field goal percentage.

However, it's not just been his outside game that has been stellar this year. This year more than ever, he's shown a willingness to get in the paint and be a scorer there too. He leads the team in scoring at 19.3 points per game. Kispert also plays good defense. He's turned into an all-round player with NBA Draft lottery pick potential.

Drew Timme is a finalist for the Naismith Karl Malone Award, which is given to the nation's best power forward. Timme was an All-WCC first team selection. He has the fourth highest field goal percentage in the country. The man who has rocked many different styles of facial hair has been a menace inside. Often times, he makes a shot while getting fouled for the and one.

Timme is a relentless scorer who is improving from three-point range. His defense has been solid too, and as an undersized center playing the center position, he's been effective in guarding the opposing team's guards as well.

Jalen Suggs is a finalist for the Naismith Bob Cousy Award, which is given to the nation's best point guard. He was also named WCC Newcomer of the Year.

The freshman phenom is the most athletic guy on the court on almost any given night. His ability to pass the ball is wicked good; as you might have heard before that he played quarterback in high school. His court vision is extraordinary; sometimes creating opportunities that otherwise wouldn't be there with another guard in the lineup. He's a high-flyer and has been the recipient of some nifty alley oops this season. His defense is something to watch too, as he hustles hard and has the most steals on the team.

Kispert, Timme and Suggs are all finalists for Naismith National Player of the Year.

Joel Ayayi is a finalist for the Naismith Jerry West Award, which is given to the nation's best shooting guard. He is crafty in many ways. On the offensive end, he's a willing passer, and has a knack for finding the open guy. One of the most undervalued aspects of Ayayi's game is rebounding. He's second on the team in the category, yes as a guard, only behind Drew Timme. He had 18 in a game once this season.

Of course, he can score, too. His most efficient way of scoring is inside, as he makes these absurd cuts to the basket, but has improved from the three-point line. consistently finding himself open for layups. Since he can do it all, it's not too surprising he recorded the first triple double in Gonzaga history this season. As a defender, he's about as pesky as you can be. He's second on the team with steals and forces teams into turnovers even when he doesn't get them.

Andrew Nembhard was named Sixth Man of the Year in the WCC and was a second team selection in the conference. The guard had come off the bench most of the season, but has taken on a starting role in place of Anton Watson. Just because he came off the bench, doesn't mean he hasn't played much. He has played the third most total minutes on the team, and they have all been valuable. Nembhard gives the Zags more offensive firepower with his reliable jump shot. He also boasts the ninth best assist to turnover ratio in the nation. He's been a valuable spark many of times for Gonzaga on offense.

GUYS COMING OFF THE BENCH VITAL TO THE OPERATION

Anton Watson has been efficient in a couple of ways that has helped Gonzaga when he was starting and now as he comes off the bench. The Gonzaga Prep graduate really prides himself on his defense as those were his roots in high school. He's done that He's fourth on the team in steals and second on the team in blocks while playing the sixth most minutes on the team. He's also been efficient scoring inside. He has the second highest field goal percentage of any player on the team that has taken at least 50 shots. He's shooting 72.5 percent inside the three point line this season.

Aaron Cook is the energy guy for Gonzaga. There have been a few games they needed an energy boost after a slow start and a lot of those times it was the guard who gave it to them. He gets it done with his defense and turns it into offense. He's active jumping the passing lanes and then turning those into transition baskets. His halfcourt defense is great too in that he'll be the type of player that will sacrifice his body for a charge or a loose ball. He's the hustle, energy guy a team needs to win a title.

OTHERS COMING OFF THE BENCH

The rest of the guys on the bench aren't getting as much playing time, but could provide some depth at times. Forward Oumar Ballo was named to the All-WCC Freshman team. Freshmen Julian Strawther and Dominick Harris have also stepped in and made contributions at times, but usually play more when the game is in hand for the Zags.