The best high school football players in the state of Minnesota take the field one last time.

ST PAUL, Minnesota — Iowa State Cyclones quarterback commit Aidan Bouman highlighted a group of the best high school football players in the state who are preparing for one final game, this time on the big stage at U.S. Bank Stadium. 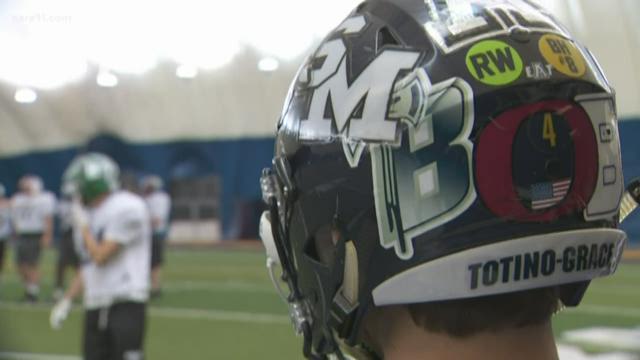 "It's awesome, it's great to be around all these guys who are all great players and it's a great way to go out," Bouman said.

The 47th annual 2019 Minnesota Football showcase game starts at 1:05 p.m. on Saturday from the home of the Vikings, where Bouman has never played before.

Friday marked the last day of practice for the North and South teams before they meet on the field.

"I just want to re-thank the Vikings, everything they've done, it's just been a perfect experience," he said.

A star for the South team is Winona High School outside linebacker Aaron Witt, who will play for the Badgers in Madison, Wisconsin next season.

Witt will have a small advantage as he takes the field opposite the quarterback he'll be trying to stop ... Aaron has played four times at U.S. Bank Stadium in his high school career already.