The redesigned Hanky is a new color for 2019, and welcomes fans to 'Bomba Szn.' 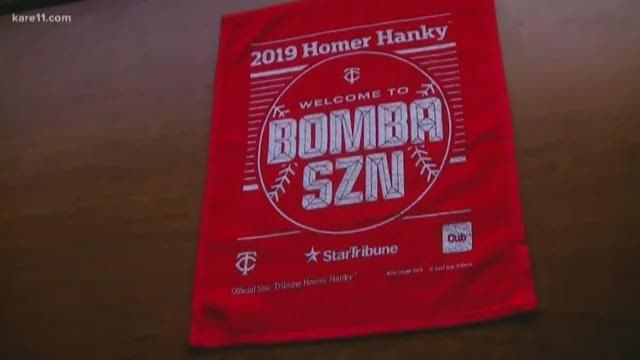 MINNEAPOLIS — Longtime Twins fans will remember the Twins' 1987 postseason run, when the Homer Hanky was first released in Game 1. Thousands of fans waved the little white hankies to cheer on the home team, and today's fans will get the same opportunity, with a few updates.

The 2019 edition of the Homer Hanky was released Thursday. A now larger terrycloth Hanky reads "Welcome to Bomba Szn" over a picture of a white baseball. Major League Baseball rules no longer allow white "rally towels," so the team's red home jersey color was chosen instead.

"The Minnesota Twins are thrilled with the return of the Homer Hanky," said team President and CEO Dave St. Peter. "Homer Hankies have long been synonymous with Twins postseason history, earning their place as a must-have collectible for multiple generations of baseball fans. We expect the 2019 Home Hanky to be a central part of what we hope will be a lengthy Twins postseason run."

Twins fans can get the new edition Homer Hanky from four main locations:

UPDATE on supply of Homer Hankies:

Cub Foods has sold out of Homer Hankies. They are hoping to get in another shipment this Saturday. Stay tuned.

The Star Tribune is currently selling the Homer Hankies on its website, but they are on back-order right now. If you buy one right now the earliest it will ship out is Monday, October 7th. That means fans who order from the Star Tribune moving forward probably won’t get them before Game 3 on Monday night.

If you buy them at Target Field the limit is 10 per person.

The Homer Hankies are made by a company in Winona, so they won’t take long to get here once they’re made.

A portion of the proceeds from Homer Hanky sales will go to the Minnesota Twins Community Fund.