Randy Shaver makes his picks for the top high school football players in Minnesota in 2020. 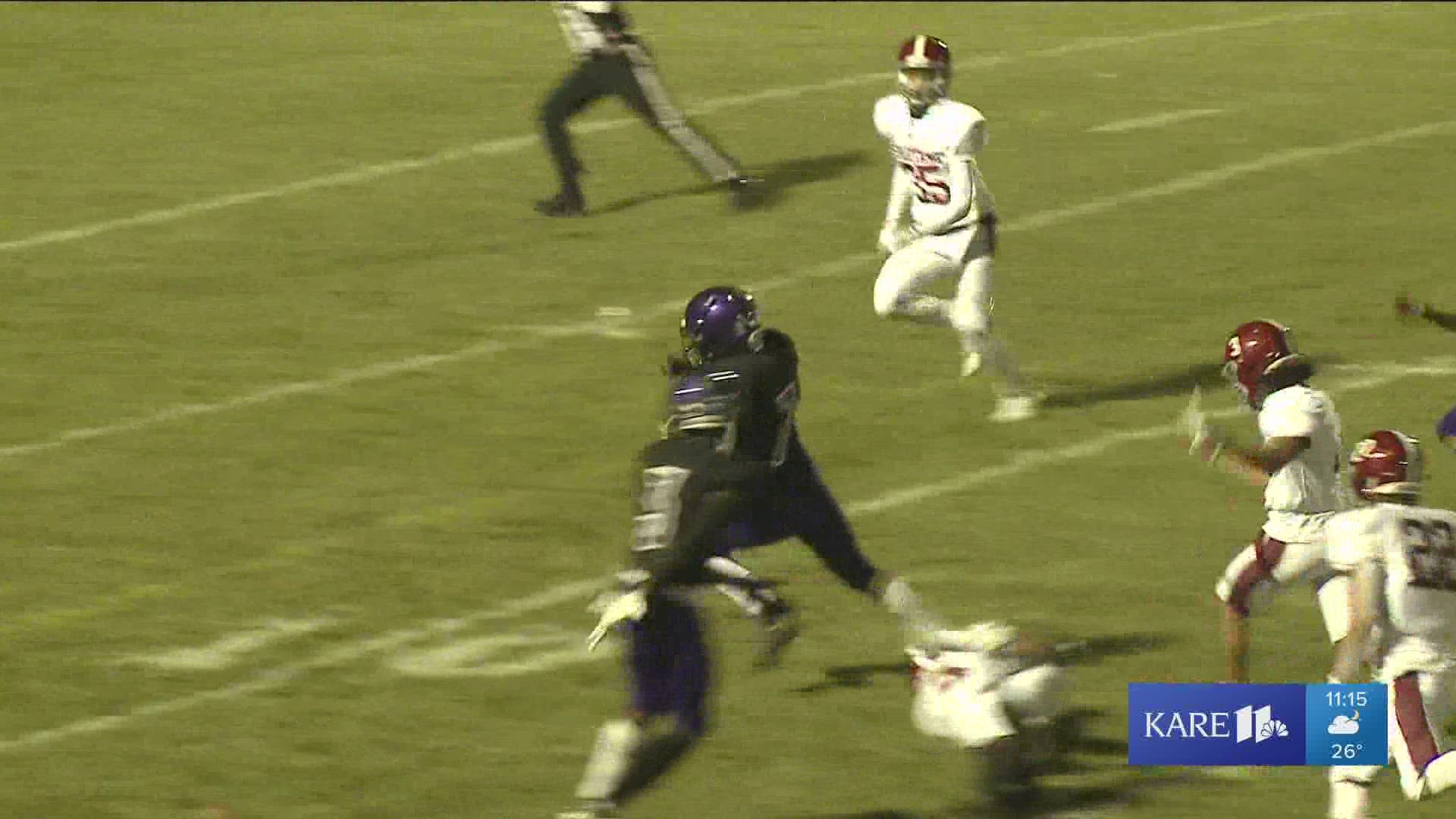 The All-Metro offense is led by our choice at athlete, Minneapolis Southwest linebacker/running back Nick Flaskamp. Nick is among the state leaders in rushing with 1,103 yards, and nine touchdowns. On defense the 5-foot-10, 205-pound senior, is the metro leader in tackles through 7 games with 93, 21 of those for losses. Nick does it all for the Lakers.

Our All Metro running backs are led by Minneapolis North's Terrance Kamara. The 5-foot-9, 175-pound senior has great speed, vision and instincts. He's one of the state's top rushers with 1,054 yards through six games. He averages eight yards per carry with eight touchdowns. Kamara is headed to Northern Iowa on scholarship.

St. Michael-Albertville star David Collins was a force in Class 6A. The senior averages almost eight yards per carry, with a total of 1,038 yards through 7 games. Collins is also an excellent receiver, and has 16 total touchdowns. David is a difference maker for the Knights.

Our All Metro quarterback is Zach Yeager of Minneapolis North, a great duel threat. The senior has 1,155 yards passing with 16 touchdowns in seven games. He's averaging 13 yards an attempt, which is best in the state by far. Zach has a big arm, but is also accurate and smart, and his ability to scramble makes him so tough to defend.

Our All Metro receivers are led by Cade Kramer for 6A power Eden Prairie. At 6-foot-2, 180 pounds, Kramer has great hands and runs excellent routes. The senior is averaging over 24 yards per catch, an amazing number. Kramer has 19 receptions for 466 yards and four touchdowns in six games.

Farmington's Eli Green was the catalyst of a big season for the Tigers.
Green can do it all. He has 22 catches for 369 yards and five touchdowns in six games. Eli is also a dangerous player every time he touches the football, especially on special teams with a long kickoff return for a score to his credit. Great player.

Our All-Metro tight end is Joe Alt of Totino-Grace at 6-foot-8, 280 pounds. Alt is a good receiver with soft hands for a big guy, but he really earns accolades as a blocker. Alt is relentless every snap, using his strength and athleticism to pancake defenders. This is why Notre Dame wants him, and they'll turn him into an offensive tackle just his dad, former NFLer John Alt.

Our All Metro offensive line is led by Lakeville South senior and repeat All Metro player Riley Mahlman at 6-foot-9, 290 pounds. Riley dominated over the past two years in South's run-heavy T offense. He's aggressive and skilled, strong and smart with great feet. He was also dominant on defense this fall with numerous tackles for loss. Mahlman is headed to Wisconsin on scholarship.

Eden Prairie offensive lineman Sam Henry is 6-foot-6, 270 pounds, and a leader up front. Head coach Mike Grant says Henry has great feet and solid technique which allows him to be so effective. The NDSU commit is a strong two-way player for a perennial 6A power, which says a lot about his ability.

Annandale's Logan Purcell is a future Gopher who dominated opponents all season. Purcell is 6-foot-7, 260 pounds and flat out mauls his opponent, then finishes with a pancake block. This is Purcell in a nutshell: relentless, strong, dominating. He played both ways for the top-rated Cardinals in 3A and was so good all season.

Wayzata's Tyler Magnuson was hurt early in the season, but came on strong for the defending 6A champs. Magnuson is 6-foot-6, 275 pounds and uses his leverage and strength to great advantage. Let’s just say he likes “pancakes” for breakfast. He's such a competitor, and plays to the whistle. Magnuson is headed to Syracuse to play college football.

Woodbury center Jake Raines was a four-year starter for the Royals.
The senior, at 6-foot-2, 275 pounds, averaged close to 10 pancake blocks per game. One opposing coach said “Raines blocked my nose guard past my free safety.” Jake blocks to the whistle, and is relentless. He was named offensive lineman of the year in the sub-district.

Edina senior Bastian Swinney was moved to guard but didn't miss a beat.
He is big at 6-foot-6, 285 pounds, fast, physical and athletic. Edina head coach Jason Potts says Swinney was the centerpiece of the Hornets run game and pass protection. Swinney is headed to Cal on scholarship.

Our All Metro kicker is Eden Prairie senior Connor Reynolds. He's got a strong leg and is accurate, with a 38-yard field goal this fall. Reynolds is perfect on extra points, going 28-for-28 through six games. He's recorded numerous touchbacks on kickoffs, which is such a great weapon to have in high school football. And to top it off, Connor is a top-notch cornerback on defense! Not just a kicker, an all-around outstanding football player.

COACH OF THE YEAR

We have two choices for Coach of the Year. The first is Fridley's Justin Reese.
The Tigers finished a perfect 7-0, earning the #1 ranking in Class 4A through the last week of the season. This perfect season was the result of 10 years of hard work by Reese and his staff. Congratulations to Justin Reese of Fridley.

Check out Randy's picks for the 2020 KARE 11 All Metro Defensive Team here.