Willis grew up on V Street in Northwest D.C. listening to Washington Senators games on a transistor radio. Now his family thinks he should throw the first pitch. 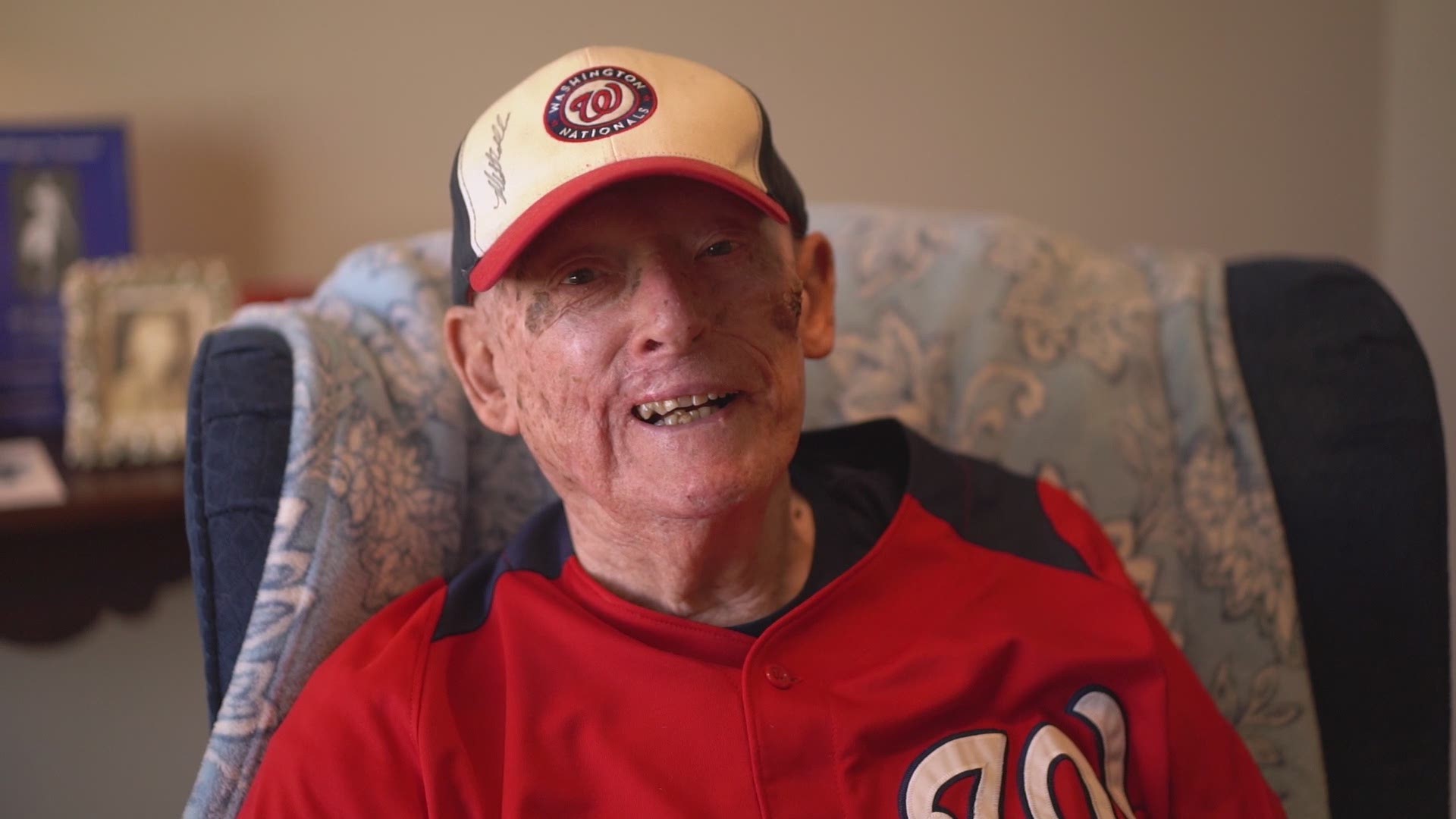 WASHINGTON — Washington Nationals fans have waited a long time for the team's first trip to the World Series. But few have waited longer than 95-year-old Norman Willis.

"He has lived passionately in all areas of his life and baseball has just simply been a strong thread in that mix," Kelly Ooten, his granddaughter, said.

“When I was young, I thought I was going to be a pitcher” Noman recalled. “So I went in and pitched one inning and they knocked it around so bad I never wanted to pitch again,” he said wit a laugh.

Norman soon realized he was more effective in the stands than on the field, cheering on D.C.’s first baseball team, The Washington Senators, from the bleachers of old Griffith Stadium. He would listen to away games on a transistor radio from his family’s house on V Street.

These days,  the walls of Norman’s assisted living home are adorned with those old Senators stars, from Walter Johnson to his all-time favorite player, Goose Goslin.

Willis was born in 1924, the same year the Washington Senators won its first World Series. At age eight, Willis said he saw Babe Ruth hit a home run in Griffith Stadium. In 1933, he witnessed the Senators face the New York Giants in the World Series. The Senators, ultimately, lost to the Giants 4-1.

Now, Willis' family hopes his lifelong love of D.C. baseball will be honored by the Washington Nationals. They want the Nationals to let Willis throw out the first pitch before one of the team's World Series games. The family has started a social media campaign to try and encourage the Nationals to grant Willis' first pitch wish.

"Throwing out the first pitch and participating in such a historic moment would be incredible," Ooten said.

“And the forward is written by Frank Howard,” Norman said proudly.

Last year, Willis met Nationals Managers Davey Martinez at a fan event, and Willis gave Martinez a signed copy of his Senators book. Kelly Ooten said her grandfather’s message to Martinez was from the heart.

"Win it all," Ooten said her grandfather told Martinez. "I don’t have much time."

Willis was at Nationals Park Tuesday night waving a red Nationals "rally towel" when the team completed a four-game sweep of the St. Louis Cardinals to win its first National League Championship.

"During that game, we only got one picture of him waving his Nats towel and soaking in the moment,” Ooten said. “He wouldn't take his eyes off the field because he said we've got a game to win."

Kelly Ooten said of her grandfather is "compassionate, generous, and kind" and hopes that when other people hear his story they will realize how special a moment that first pitch could be to him.

"To see other people know his story, and know who he is, and then to witness that and then let them be a part of his story of witnessing him throw out a first pitch, that would really special."

These days Norman isn’t quite as close to the ballpark as he used to be.

He and his wife Frances moved to Charlottesville, Virginia a few years ago to be closer to family. Frances used to go to the games with him but she passed away earlier this year after 73 years of marriage.

Credit: Kelly Ooten
Norman Willis and his wife Frances on the field at Nationals Park

Still, Norman has continued to make the two-and-a-half-hour trip from Charlottesville to see games.

“Well somebody else is going to drive it not me," Norman said, pointing to his grandson in law Mark Ooten, who made sure Norman was right there in the stands as the Nats swept the St. Louis Cardinals. The victory gave the Nationals their first ever National League Championship and the city’s first World Series birth in 86 years.

We asked Norman what kind of pitch he would throw.

"Just a straight ball I have no curve,” he said with a laugh.

Hoping to be part of history after a lifetime waiting for the World Series trophy to return to D.C.

“I can’t guarantee it, but they won’t have a harder rooter for us to do it this time, than I,” Norman said.

Regardless of what happens, Norman will make that two-and-a-half-hour drive from Charlottesville next weekend to be in his seat at a World Series game. And he may just have received a sign good things are to come. His 15th great grandchild, Lincoln, was born Monday.

Norman is savoring every moment of the team’s magical run.

"Well it’s fulfilled a dream," Norman said. "The fact that we finally qualified to play this time, means a lot to me because I said I’m running out of time."

Credit: wusa9
Willis with his granddaughter at his assisted living home.

RELATED: VERIFY: How to make sure your World Series ticket is legit