The Nationals have won every postseason game this year when mascot Teddy Roosevelt wins the Presidents race. So, good sign Nats fans! 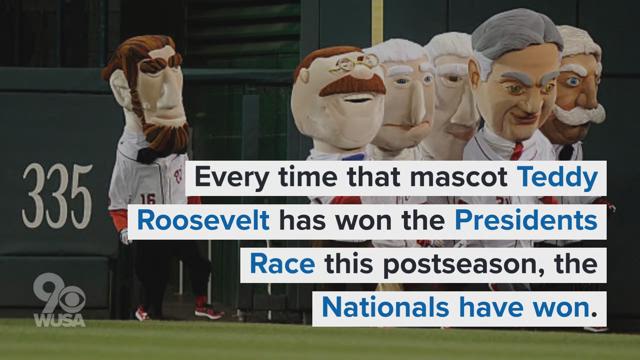 WASHINGTON — Every time that mascot Teddy Roosevelt has won the fourth-inning Presidents Race this postseason, the Nationals have won. And tonight, with the help of a certain 'Baby Shark', Teddy Roosevelt won the first-ever World Series President's Race!

It's the first time in the 2019 World Series that the Nationals have gotten to do the Presidents Race, as the run only happens during the fourth inning of home games. As Games 1 and 2 were at Minute Maid Park in Houston, the President's had to wait to battle it out.

But Teddy didn't win Friday night's Presidents Race completely on his own -- it was the help of a baby shark mascot, who stalled the other three presidents, that eventually helped secure the victory.  Baby Shark jumped out of the bullpen to scare George and Tom, helping Teddy snag the lead by a wide margin, with the stadium's organist playing Baby Shark in the background.

It's the 36th win of the season for Teddy Roosevelt, who is currently in first place for the season. Abraham Lincoln and Thomas Jefferson are both tied for second place, with 20 wins each.

RELATED: The history of the Nationals Presidents Race: Who is winning and why