The history of the Nationals Presidents Race: Who is winning and why

With the Nationals making history heading to the World Series, we decided it was time to pay homage to our favorite baseball mascots with a history lesson. 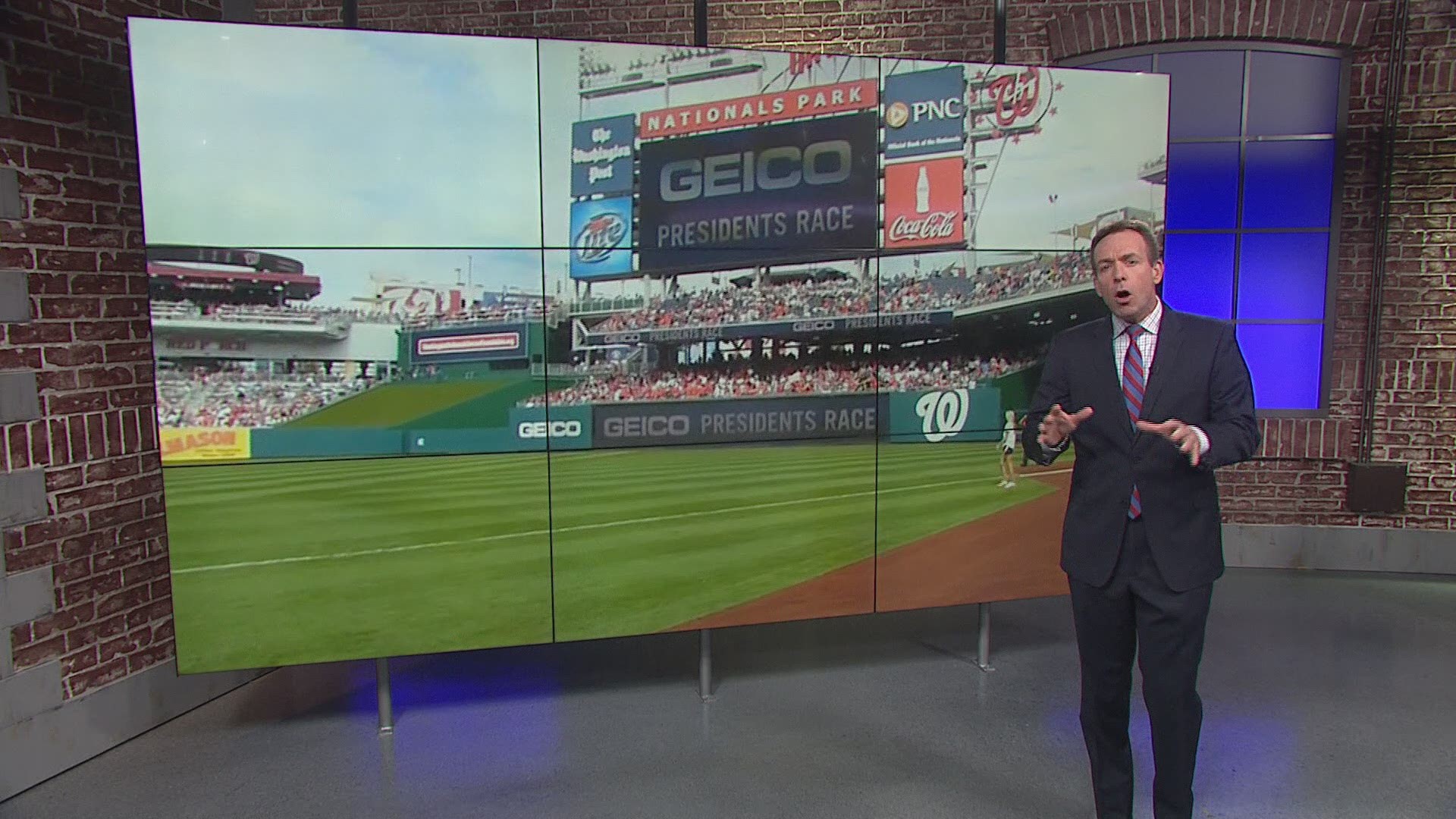 WASHINGTON — A presidential election may be happening next year, but did you know a presidential race happens every home Nationals game?

The Nationals Presidents Race, the middle-of-the-fourth-inning mascot run, has been a team tradition since July 21, 2006. With the Nationals making history heading to the World Series, we decided it was time to pay homage to our favorite baseball mascots with a history lesson of our own.

Who exactly runs in the Presidents Race?

The answer depends on the season. The four main U.S. presidents that race around the bases are the ones found on Mount Rushmore: George Washington ("George"), Abraham Lincoln ("Abe") Thomas Jefferson ("Tom") and Theodore Roosevelt ("Teddy").

However, other mascots have joined in the competition: William Howard Taft ("Bill") was added to the mix in 2013 and retired after the 2016 season. Calvin Coolidge and Herbert Hoover ("Herbie") only raced for a single season each, Coolidge in 2015 and Hoover in 2016.

What do they wear?

The Presidents dress in massive foam caricature heads and Nationals jerseys whose numbers correspond to their term as president -1 for George, 3 for Tom, 16 for Abe and 26 for Teddy.

According to LetTeddyWin! a fan-run blog that keeps up-to-date stats and trivia about the races, the costumes were created by Randy Carfagno Productions, a New York City-based theater manufacturer. The inspiration for the costumes came from a Bette Midler concert puppet the manufacturer created, and whenever a costume malfunctions, it must be sent all the way back to New York.

Fun fact: On Sunday home games, you can even find them in their "Sunday Best" period costumes.

RELATED: Feeling presidential? You can apply to be one of the Racing Presidents for the Nationals

Credit: AP
Mascots race during the fourth inning of Game 3 of the baseball National League Championship Series between the St. Louis Cardinals and the Washington Nationals Monday, Oct. 14, 2019, in Washington. (AP Photo/Patrick Semansky)

When and where does the race take place?

The race happens at every Nationals home game, in the middle of the fourth inning. Each of the four Presidents walks through the center field fence and run along the warning track, with the final stretch of the race by the first base foul line and towards Nat's home dugout.

Fun fact: If the game goes to the 13th inning (a.k.a the fourth extra-inning), the Presidents get geared up and race again.

The four mascots have made quite the splash inside and out of the races. Each has their own personalities, as defined by the Nationals official team website.

"Abe Lincoln is the true dark horse. Raised in a cabin and reared on hard work and dedicated study, Abe is undaunted by odds. His athleticism comes from years of toil. His determination is innate. Despite his famous moniker, Abe is not always the most honest of runners - he realizes what it takes to win and knows that, in the end, he will earn the respect of his competitors. With long strides (and longer face), Abe often finds himself emancipating himself from the pack and crossing the finish line first. "

Credit: AP
The Teddy Roosevelt mascot wins the President's race during the fourth inning of a baseball game between the Washington Nationals and the Chicago Cubs, Sunday, May 12, 2013, in Washington. The Cubs won 2-1. (AP Photo/Nick Wass)

"Teddy is the people's champion. He became the undisputed favorite among fans who were baffled by his seeming inability to win, a streak that lasted nearly seven full seasons. He had the skills, he had the drive and he had the brains, but he did not legally break the finish line first until the final regular-season game of 2012 - following the Nationals first-ever playoff berth. Maybe it's his independent Bull-Moose spirit, but Teddy doesn't like to play by the rules. He's been spotted in the upper deck, tossing t-shirts, or cruising in a golf cart, all while his racing compatriots stick to the track. "

"George Washington is the quintessential champion. He is, as the saying goes, first in war, first in peace and first to win the Washington Nationals Presidents Race. This final achievement ranks among George's most cherished, including winning the American Revolution and founding the nation. George is low-key and confident, not a braggart. He races with easy strides, sure of his ability, proud of his achievements. Because of his confidence, he may seem stoic and disinterested - maybe even above it all. Undaunted by his opponents, George is simply determined to win -even if it takes putting a lesser man down. "

"Tom Jefferson is more bookish than athletic. He is a reader, a studier. He is prone to distraction, once stopping mid-race to orate to the crowd. Before each race, Tom tests the atmospheric conditions in the stadium, the incline of the route and the length of the course...and sometimes ferments up a bottle of wine. He was often the last one picked on the colonial playground (but was always the first picked for the math team). Still, with dashing good looks, a keen mind, and perhaps a bit of bravado, Tom often sprints his way to the front of the race. "

So, what's the deal with that Teddy Roosevelt losing streak?

One of the longest-running -- pun intended -- jokes the President's Race had was that Mascot Teddy Roosevelt just couldn't seem to win a race. But the reasons for the failures weren't just slow speed -- Teddy's losses included everything from tripping, being attacked by a guy in a shark costume, talking to fans and forgetting to run, and even cheating. Mr.Roosevelt's antics included everything from running the wrong baseline to driving a golf cart past his fellow presidents. He even zip-lined into the infield from the top of the stadium in 2007! You can't say the man isn't creative.

WATCH: Teddy Roosevelt flies on in from the top of the stadium

I can see myself in a 50-pound suit racing across Nats Park. How do I apply?

While the team has officially closed applications for the 2019 season, becoming a mascot is an actual job people can apply for through the Nationals organization.

You just have to be anywhere from 5'7" to 6'6", must be 18 years or older, and have a high school degree or GED. Last year's applications closed December 15, with invite-only auditions occurring on January 6. Previous mascot experience is preferred, but not required.

What are the current standings for the 2019 season?

According to LetTeddyWin! the current standings for the Presidents Race, including post-season, are:

RELATED: Get ready for the World Series with these deals, discounts and happy hours