Michael Haas and Tom Johnson created a Twins shrine in April at Darby's Pub and Grill. 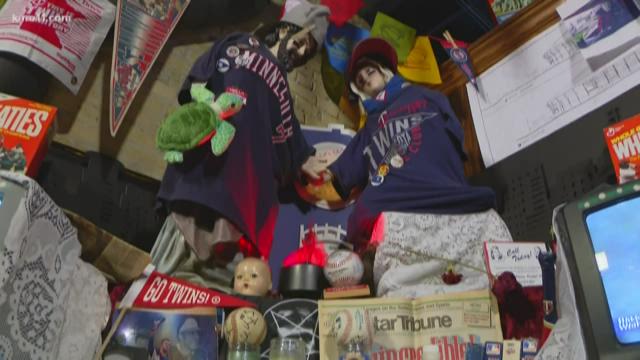 MINNEAPOLIS — When it comes to America's pastime, superstitions seems to be everything for players and fans.

It's all about preserving that good juju.

"Have to have my homer hanky in the same room," said Michael Haas.

"Every time they get bases loaded, I turn my cap backwards," said Marcus Dorn.

Michael Haas and Tom Johnson call themselves the leaders of positive energy for Twins success.

They are the co-creators if the now famous shrine which is an assortment of Twins memorabilia, photos, videos, Metrodome dirt, and even a repurposed nativity set.

"Repurposed those into Minnie and Paul," said Haas.

The shrine is all set up at Marcus Dorn's Darby's Pub and Grill near Target Field.

"If this is something that brings us home playoff baseball I'm all for it," said Dorn.

It all started on April 26th.

"When we had our grand opening the Twins hit three home runs in a row," said Haas.

"Knew right away it was a special energy," said Johnson.

"We hope we influenced the baseball gods," said Haas.

All the Twins did was go on to win 101 games, set the record for home runs in a season and earn a matchup against the New York Yankees in the AL Division Series.

"Oh we can't take all the credit for it. It's still the players. They're doing baseball things. So realistically we can only take credit for 90 percent of their success," said Haas.

I think we can all hope the shrine plays it's part Friday.

"A lot of hand holding around the shrine. Positive energy and send it the Twins way," said Haas.

"This series the Yankees they're dark magic. We're good magic. We really hope to play a big part," said Johnson.

RELATED: The 'Bomb Squad' behind the Bomba Squad