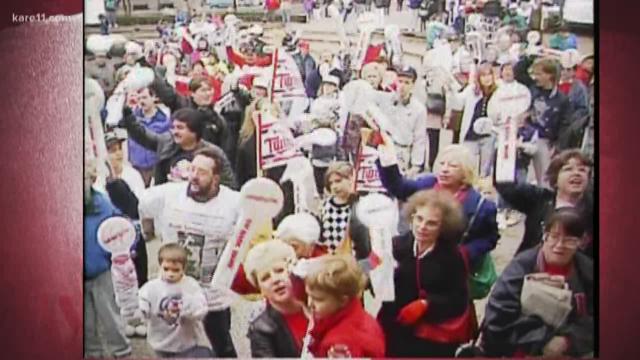 "The Minnesota Twins organization is saddened by the passing of Dick Wilson," St. Peter said in a released statement. "The ballclub extends our deepest sympathies to his family and loved ones. ‘We’re Gonna Win Twins’ helped introduce Major League Baseball to fans across the Upper Midwest. The catchy tune quickly became synonymous with Twins baseball at the ballpark, on radio or on television and, with its exuberance, still resonates with fans of all generations."

Die hard fans can belt out the words to the catchy song, which became a staple of Twins games and radio broadcasts from the time the ballclub came to Minnesota from Washington, D.C. in 1961. Wilson, an ad exec and jingle writer came up with the lyrics, and a gentleman named Ray Charles (no, not THAT Ray Charles) wrote the music. It's played at every home contest as the Twins take the field. If you don't know it, here's how the song goes:

Knock out a homerun, shout a hip-hooray!

Cheer for the Minnesota Twins today!

Several different versions of the fight song have been recorded through the years to keep it current.

Wilson died August 29 after suffering a stroke. He was 83 years old.