MINNEAPOLIS - The newest call-up to the Cretin-Derham Hall varsity baseball squad has a hidden talent but to his teammates, however, junior Dom Lonetti's unique skill is no secret. 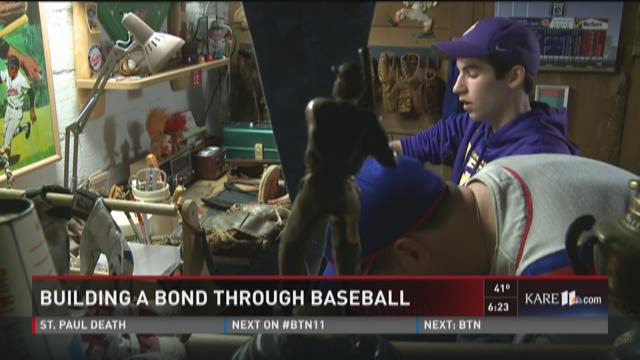 MINNEAPOLIS - The newest call-up to the Cretin-Derham Hall varsity baseball squad has a hidden talent but to his teammates, however, junior Dom Lonetti’s unique skill is no secret.

“He makes it known that if you have a glove problem, he’s there to help you,” says Cretin-Derham Hall teammate Mitchell O’Brien.

One trip to Lonetti’s basement, and you see baseball is serious business. Behind the treadmill and across from the washer and dryer is a corner jam packed with baseball memorabilia. Baseball gloves, a chair from the Met, and baseball bats tucked into the ceiling are among the décor.

What started as a father-son hobby in the Lonetti’s south Minneapolis mancave, has turned into their family business. D & J Glove Repair re-laces and refurbishes any type of baseball glove.

“Four or five years ago wasn’t even able to thread a needle,” says Jim Lonetti. “Now I can hand him off a glove and he can re-lace it.”

For Dom, the basement business is far from work.

“When I became more comfortable with fixing them, I realized how much fun it can be,” says Dom. “How much of a relaxing experience it is just keep your hands moving.”

Prices for repair average around $15. Full glove repair costs $48. The Lonetti’s are saving the money they make for Dom’s college fund, but the two say it’s not about the cash.

“The most rewarding part is just doing it with Dom,” says Jim.

A sentiment echoed by his business partner, who has no plans to give up this labor of love.

“Definitely staying with me the rest of my life,” says Dom. “I hope everybody keeps coming to me with gloves.”