Another civil lawsuit was filed against Baylor Tuesday by a former volleyball player, who claims she was the victim of a brutal gang rape that the University failed to address. 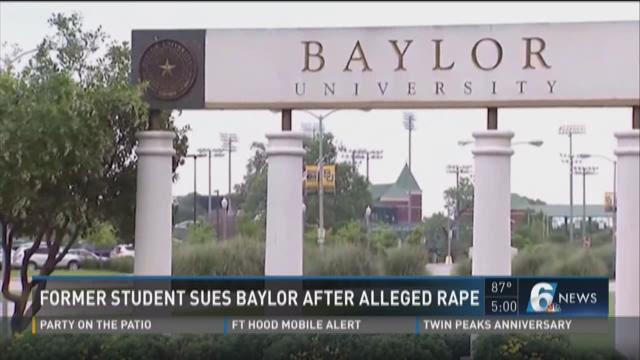 Another civil lawsuit was filed against Baylor Tuesday by a former volleyball player, who claims she was the victim of a brutal gang rape that the University failed to address.

The victim said she was raped by as many as eight Baylor football players on Feb. 11, 2012. That was approximately a month before two more female Baylor students were allegedly gang raped by football players, as has previously been reported.

According to the new lawsuit, the plaintiff was repeatedly harassed by football players as late as May 2013. In July, her mother met with an assistant football coach at a Waco restaurant, where the mother provided a list of players allegedly involved in the gang rape, according to the lawsuit.

Two months later, the University broke ground on McLane Stadium. As the stadium was being constructed, the plaintiff was harassed, forced to have class with two of her assailants, and two Baylor football players burglarized her apartment, the lawsuit said. The burglary was in April 2013, according to the plaintiff. That same month, a member of the Baylor Bruins hostess program was brutally gang raped by Baylor football players Tre'Von Armstead and Shamycheal "Myke" Chatman, according to the court filing.

"[The] Plaintiff's sexual assault, like countless others, occurred during what has become known as the most violent and atrocious in school history," the lawsuit said.

In the lawsuit, the plaintiff claims photographs and videos of semi-conscious girls were taken during multiple gang rapes and circulated by members of the Baylor football program. According to her, there exists at least one 21-second video of two female Baylor students being gang raped by University football players.

The plaintiff ended up transferring away from Baylor. The lawsuit claims the University was "deliberately indifferent" to sexual assault and sex-based harassment. In fact, in the plaintiff's case, the lawsuit alleges the gang rape was reported to fired Head Football Coach Art Briles and Former Athletics Director Ian McCaw, who resigned and now works at Liberty University in Lynchburg, Virginia.

The case is rooted in a Title IX complaint and accuses the University of failing to follow federal law. In addition to compensatory damages for the alleged victim, the lawsuit seeks a judge to issue a mandatory injunction to make Baylor "more compliant" with Title IX, according to the plaintiff's attorney Mo Aziz.

"The ideal outcome would be to get recovery for what she's been through and also to ensure this sort of thing doesn't happen again," Aziz told KCEN-TV Wednesday.

The University has previously stated it has made strides in addressing Title IX issues since last year -- including beefing up its Title IX office. Just last week, Baylor's Board of Regents announced "structural completion" of the 105 recommendations from the Pepper Hamilton Law Firm, which investigated the University's prior mishandling of rape and sexual assault. The full findings of that report were never written down, Baylor claims. But, a summarized findings of fact -- typed on University letterhead -- is available here.

The alleged incident outlined in the court filing occurred more than five years ago, and Baylor University has been in conversations with the victim’s legal counsel for many months in an attempt to reach an amicable resolution.

“Baylor has since initiated and structurally completed 105 wide-ranging recommendations in response to issues of sexual violence within our campus community, in addition to making changes within the University and athletics leadership and investing significantly in student support services.

“As this case proceeds, Baylor maintains its ability to present facts – as available to the University – in response to the allegations contained in the legal filing. The University’s response in no way changes Baylor’s position that any assault involving members of our campus community is reprehensible and inexcusable. Baylor remains committed to eliminating all forms of sexual and gender-based harassment and discrimination within our campus community.

More information about Baylor’s response to sexual violence can be found here.