In the latest chapter of their year-long feud, Cleveland Browns quarterback Baker Mayfield took issue with a rant in which Fox Sports Radio's Colin Cowherd referred to him and general manager John Dorsey as "peas in a pod." 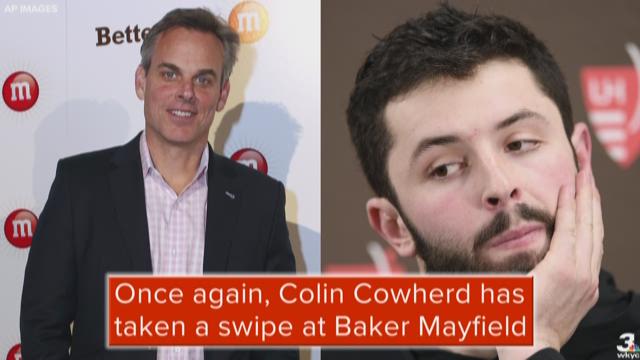 BEREA, Ohio -- Once again, Colin Cowherd has taken a swipe at Baker Mayfield.

And once again, Mayfield has replied.

The latest chapter in the ongoing feud between the Fox Sports Radio personality and the Cleveland Browns quarterback came on Friday when Cowherd spent a segment of his show discussing a feature by Zac Jackson of The Athletic detailing Browns general manager John Dorsey's selection of Mayfield with the top pick in last year's NFL Draft.

"John Dorsey got fired by Kansas City. Baker Mayfield was a walk-on twice and Cleveland's been the laughing stock of the league," Cowherd said. "They're all three peas in a pod. They work together.

"Dorsey gets maligned for taking high-risk guys and getting whacked. And Baker got looked past twice by college programs and he's got a chip on his shoulder. And Cleveland, I mean, let's be honest. For years, it was known as 'the mistake by the lake,' the city gets whacked. In the end, these three just work together."

As one might expect, Mayfield didn't take kindly to the backhanded nature of Cowherd's analysis. And perhaps to the surprise of no one, the second-year signal-caller was unafraid to voice his displeasure, taking to Twitter to reply to a four-minute clip of Cowherd's segment.

This isn't the first tiff between Mayfield and Cowherd, who was one of the 2017 Heisman Trophy winner's biggest critics entering last year's draft. Even after Mayfield appeared as a guest on his show last spring, Cowherd continued to critique the No. 1 pick throughout his record-breaking rookie season.

Last December, Mayfield responded to the criticism in his own unique way, wishing a Merry Christmas to his favorite "Grinch." Earlier this year, he also accused Cowherd of being full of "BS" after stating that Odell Beckham Jr. was unhappy with being traded from the New York Giants to the Browns.

Even a year ago, Mayfield was mocking Cowherd for criticizing the Browns selection of him. So while Friday's exchange between the two is the latest episode in their public rivalry, there's plenty of reason to believe it also won't be the last.