Close is not good enough. Cleveland Browns fall to Denver Broncos, 24-19, drop to 2-6 on season

The Cleveland Browns dropped to 2-6 on the season with a 24-19 loss to the Denver Broncos at Empower Field in Denver Sunday. 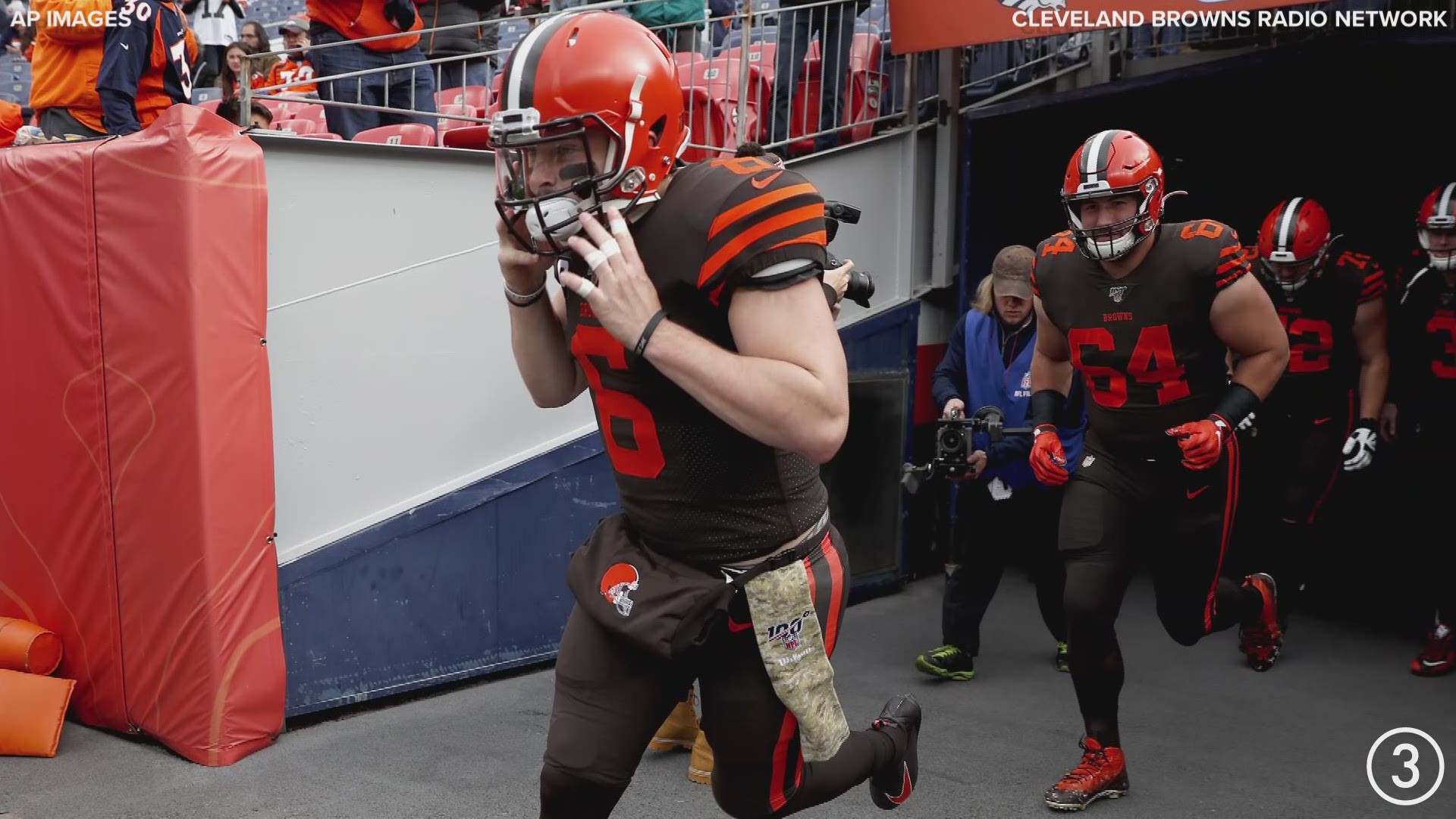 The Cleveland Browns’ furious rally came up just a little bit short against the Denver Broncos at Empower Field in Denver Sunday night.

The Browns (2-6) went to Denver in search of their first victory in over a month, but the hill proved too high to climb, as down by 12 points heading into the fourth quarter, they were stopped on a fourth-and-four from the Broncos’ 28-yard line with 3:23 remaining in the game, as the pass was broken up.

Second-year Browns quarterback Baker Mayfield completed 27 of his 42 attempts for 273 yards and one touchdown, but he was outdueled by Denver’s Brandon Allen, who in his first-ever NFL start, threw for two scores on the way to the victory.

Watch Ben Axelrod & Matt Florjancic recap the game in the player below: 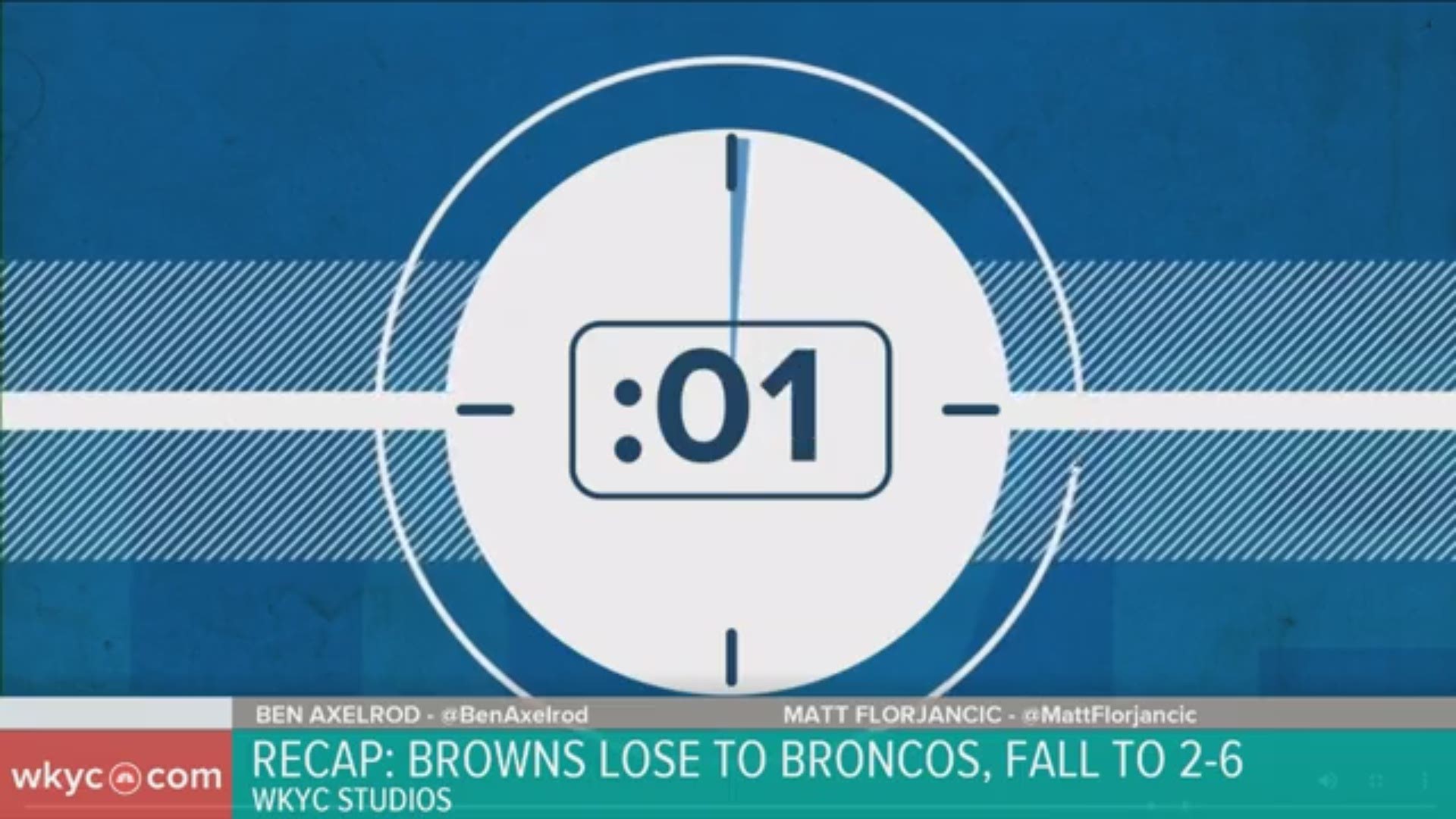 It took Jarvis Landry eight games to find the end zone in 2019, but that streak came to an end early in the fourth quarter of Sunday’s game between the Cleveland Browns and Denver Broncos at Empower Field in Denver.

On first-and-goal from the Denver nine-yard line, quarterback Baker Mayfield took the shotgun snap from center JC Tretter and flared a pass to the left flat, where Landry caught it, then fought off a tackle attempt and hustled across the goal line for the touchdown.

Rookie kicker Austin Seibert banked in the extra point try off the right upright and cut down the Broncos’ lead to five points, 24-19, with 10:47 to play in the fourth quarter.

Even when the Cleveland Browns break the rules, they still cannot keep the Denver Broncos at bay.

Despite an illegal hands to the face penalty against defensive lineman Chad Thomas, the Browns could not keep the Broncos out of the end zone, as Pro Bowl running back Phillip Lindsay broke a 30-yard run for a touchdown.

Following the successful extra point, the Broncos took a 24-12 lead over the Browns with 1:06 remaining in the third quarter at Empower Field in Denver.

The Broncos’ scoring drive covered 95 yards in just seven plays with three passes from quarterback Brandon Allen going for 16, 10 and 24 yards respectively before Lindsay broke free around right tackle and powered his way into the end zone for the touchdown.

5:56 p.m./ET-Seibert tacks on another field goal

Rookie kicker Austin Seibert struggled with consistency throughout training camp and the preseason, but the first-year specialist has been responsible for all of the Cleveland Browns’ first-half points against the Denver Broncos at Empower Field in Denver.

Seibert finished off a 13-play, 63-yard drive with a 30-yard field goal, which cut Denver’s lead over the Browns to 17-12 heading into halftime.

Seibert went four for four on his field goal attempts in the first half against Denver.

Earlier in the drive, quarterback Baker Mayfield completed three attempts for first downs, including a five-yard pass to wide receiver Jarvis Landry, 10-yard throw to fellow receiver KhaDarel Hodge and a 13-yard effort to Landry, all of which helped the Browns move the ball to Denver’s 12-yard line before Seibert’s kick.

The Denver Broncos extended their lead over the Cleveland Browns with a 43-yard field goal from kicker Brandon McManus late in the second quarter.

McManus’ first field goal of the game gave the Broncos a 17-9 lead over the Browns with 1:47 remaining in the first half at Empower Field in Denver.

Rookie kicker Austin Seibert continues to be the Cleveland Browns’ only offense through the first half of their inter-conference game against the Denver Broncos at Empower Field in Denver Sunday.

After a Browns drive stalled at the Denver nine-yard line, Seibert converted a 27-yard field goal, his third of the game, which cut Denver’s lead over Cleveland to five points, 14-9, with 3:49 remaining in the second quarter.

The Browns’ scoring drive was set up by an opportunistic defense, as linebacker Joe Schobert forced a fumble from receiver Diontae Spencer. Cornerback Denzel Ward recovered the turnover and returned it six yards to the Denver 18-yard line.

Rookie kicker Austin Seibert has been the Cleveland Browns’ offense for the first two quarters of their game against the Denver Broncos at Empower Field in Denver, as he is responsible for their only points in the first half.

Seibert capped off a nine-play, 64-yard drive with a 30-yard field goal conversion, which cut the Broncos’ lead down to 14-6 with 7:14 to play in the first half.

Quarterback Baker Mayfield completed two of his three passes on the scoring drive, including a 41-yard reception from wide receiver Antonio Callaway, and then, extended the possession with a 16-yard scramble on third-and-14 from the Denver 33-yard line to the 17.

It did not take long for the Denver Broncos to respond to the Cleveland Browns’ successful field goal attempt. As a matter of fact, it took all of one play for the Broncos to hit paydirt in front of the home fans at Empower Field in Denver.

On first-and-10 from the Denver 25-yard line, Broncos quarterback Brandon Allen, who was making his first-ever start in the National Football League, threw a short pass to tight end Noah Fant on a crossing route toward the left sideline.

After securing the catch, Fant ran through tackle attempts from cornerback Greedy Williams, safety Jermaine Whitehead and linebacker Adarius Taylor before getting into open space and hustling his way into the end zone.

With the extra point, the Broncos took a 14-3 lead over the Browns with 12:34 to play in the first half.

5:05 p.m./ET-Browns get on scoreboard with Seibert FG

The Cleveland Browns did not score in the first quarter against the Denver Broncos, but they opened the second period with a drive that ended in a field goal.

Rookie kicker Austin Seibert converted a 38-yard field goal attempt to get the Browns on the scoreboard, and his kick, which capped off a five-play, 19-yard drive, cut the Broncos’ lead down to four points, 7-3, with 12:48 to play in the first half at Empower Field in Denver.

The Browns had a short field thanks to a 13-yard punt return from Dontrell Hilliard and a five-yard penalty for a Denver player who went out of bounds and did not immediately return to the field.

The Browns got one first down on the drive when quarterback Baker Mayfield found tight end Demetrius Harris for a 12-yard gain on the first play of the possession.

The Cleveland Browns trailed the Denver Broncos, 7-0, after the first quarter of play at Empower Field in Denver Sunday.

Quarterback Baker Mayfield completed five of his nine first-quarter passes for 36 yards and was sacked once for a seven-yard loss, while second-year running back Nick Chubb accounted for 17 yards on four carries.

Wide receiver Odell Beckham Jr. was the Browns’ leading pass-catcher, as he hauled in two catches for 13 yards.

Making his first-ever start in the National Football League, Broncos backup quarterback Brandon Allen completed five of his first eight throws for 50 yards and rushed for 16 yards on two scrambles out of the pocket in the first quarter.

The Denver Broncos went three-and-out on their first possession against the Cleveland Browns, but they tested the secondary on their second drive and came up with a score.

On first-and-10 from the Cleveland 21-yard line, quarterback Brandon Allen took the snap from center, quickly looked right and lofted the ball down the sideline for wide receiver Courtland Sutton. Despite tight coverage from Browns cornerback Denzel Ward, Sutton made the catch and retained possession of the ball after crashing to the turf.

With the successful point-after try, the Broncos held a 7-0 lead over the Browns with 6:09 to play in the first quarter at Empower Field in Denver.

The Cleveland Browns have not lacked for focus in preparation for today’s game against the Denver Broncos at Empower Field in Denver, not with how the much-anticipated 2019 regular season started.

At 2-5 and on a three-game losing streak, the Browns find themselves in third place in the AFC North Division, three games in back of the front-running Baltimore Ravens, and are looking for a much-needed win, something the players have seen already on the practice field.

“I feel like there’s a focus around here, there’s an urgency that we’ve got to make something happen,” Browns left guard Joel Bitonio said.

“It’s one of those things where everybody here, we’re grown men, we’re this, we’re that, but there’s something to be said in meetings if you’re taking the right notes, if you’re prepared, because everybody goes out there and plays hard.

“There is an urgency about it. I think every week, it's been a little more urgent. You see a loss in the loss column, and you want to make a move, but we've talked about it enough. We've said everything that needs to be said. It's either we're going to do it and be successful this season or not and we're going to lose games.”

For the second straight week, the Browns are taking the show on the road and this Week 9 matchup will be played at altitude as they are set to square off against the Broncos.

“Looking forward to the opportunity of going and playing Denver out in Denver,” Browns coach Freddie Kitchens said earlier in the week. “Three of their games have come down to last-second field goals. They are a good football team.

“They are solid on both sides of the ball. They will be starting a good, solid, young quarterback. They have a good receiver in (Courtland) Sutton and a couple of guys in the backfield that can make plays. We have our work cut out for us offensively, defensively and special teams. They are top 10 in the league in several categories on defense and on special teams.”