Odell Beckham Jr. and Jarvis Landry told to change cleats or be pulled vs. Broncos

According to CBS Sports' Jay Feely, Cleveland Browns receivers Odell Beckham Jr. and Jarvis Landry were told to change their cleats or be sidelined vs. the Broncos. 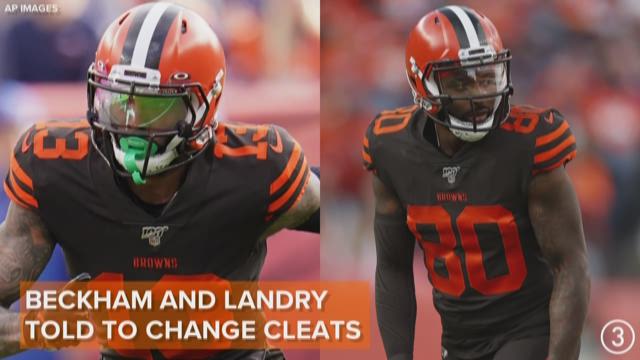 To this point in his first season with the Cleveland Browns, Odell Beckham Jr. has made more of a statement with his fashion than his play.

But in the Browns' matchup vs. the Denver Broncos on Sunday, the officials had a message for both Beckham and teammate Jarvis Landry: Tone it down or take a seat.

According to CBS Sports sideline reporter Jay Feely, both Beckham and Landry were told by officials to change their cleats at halftime. If not, both players would be sidelined until they complied for failing to adhere to the league's uniform policy.

Beckham had been wearing a pair of his Nike Vapor Untouchable Pro 3 OBJ Uptempo Cleat with The Joker painted on them, while Landry was wearing a gold-and-orange pair of Nike cleats prior to the request.

This isn't the first time Beckham's fashion has landed him in hot water this season. In the Browns' season-opening loss to the Tennessee Titans, the 3-time Pro Bowl receiver famously wore a Richard Mille watch that is valued at $190,000. A week later, he wore a $2 million watch during pregame warmups, although the authenticity of the piece was heavily disputed online.

Despite being told by the league to stop doing so -- and signing an endorsement deal with Swiss watchmaker Daniel Wellington -- Beckham has continued to wear watches at times this season, although it remains unclear whether or not he's been punished for doing so. It's also worth noting he was temporarily pulled from a drive in the Browns' Week 2 victory over the New York Jets for failing to wear a visor tint that complied with league rules.