From Trevor Lawrence to Walker Little to Jalen Camp: learn more about the newest Jacksonville Jaguars 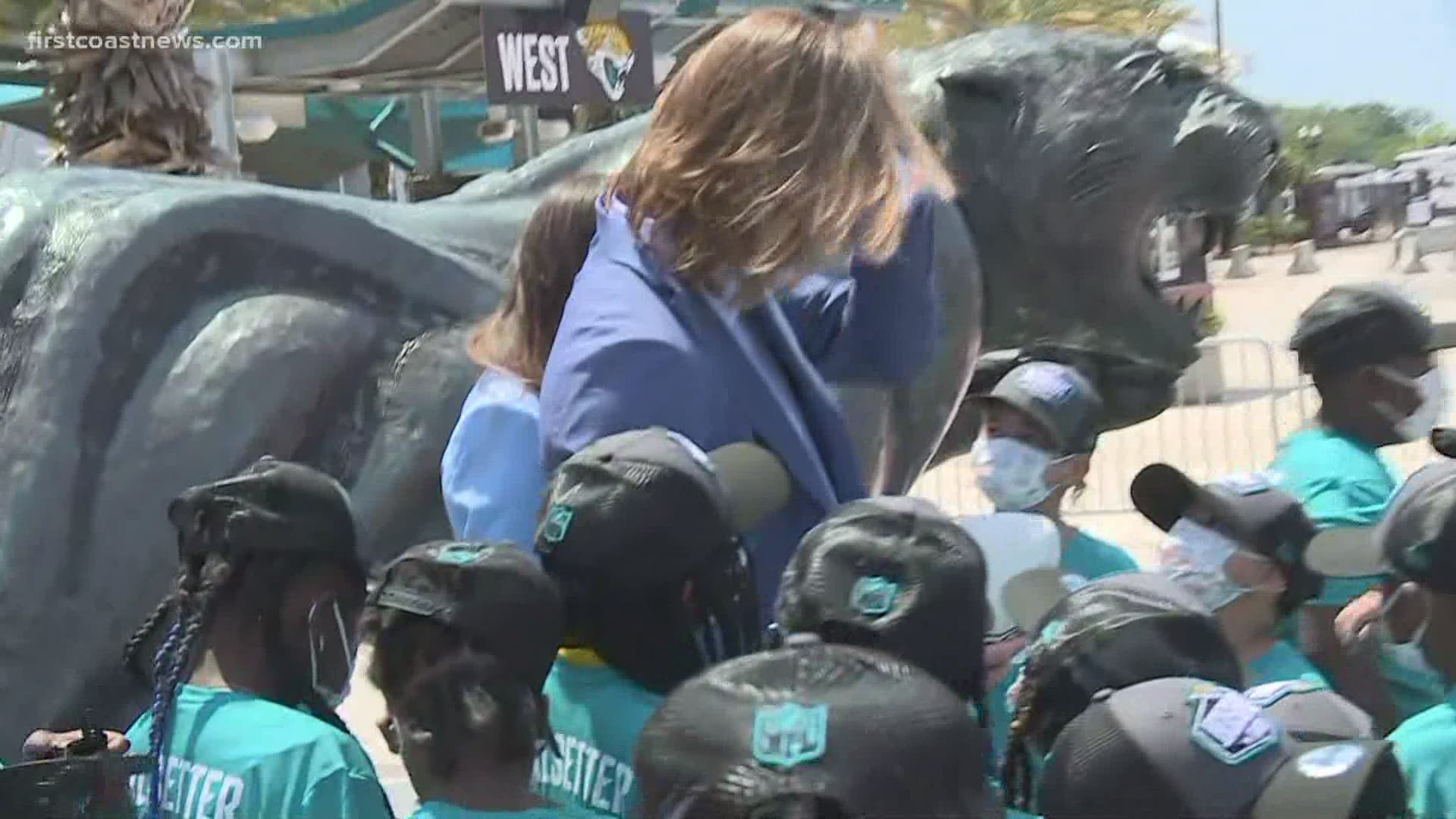 JACKSONVILLE, Fla. — MAY 1, 4:47 P.M.: With their final pick of the 2021 NFL Draft, the Jaguars have selected Georgia Tech wide receiver Jalen Camp. Camp led Georgia Tech in receptions, receiving yards and touchdowns in 2020. Camp ran a 4.43 40-yard dash at his Pro Day.

MAY 1, 2:45 P.M.: After a little bit longer wait than he probably expected, former Trinity Christian and Ohio State stand-out Shaun Wade is headed to the NFL. 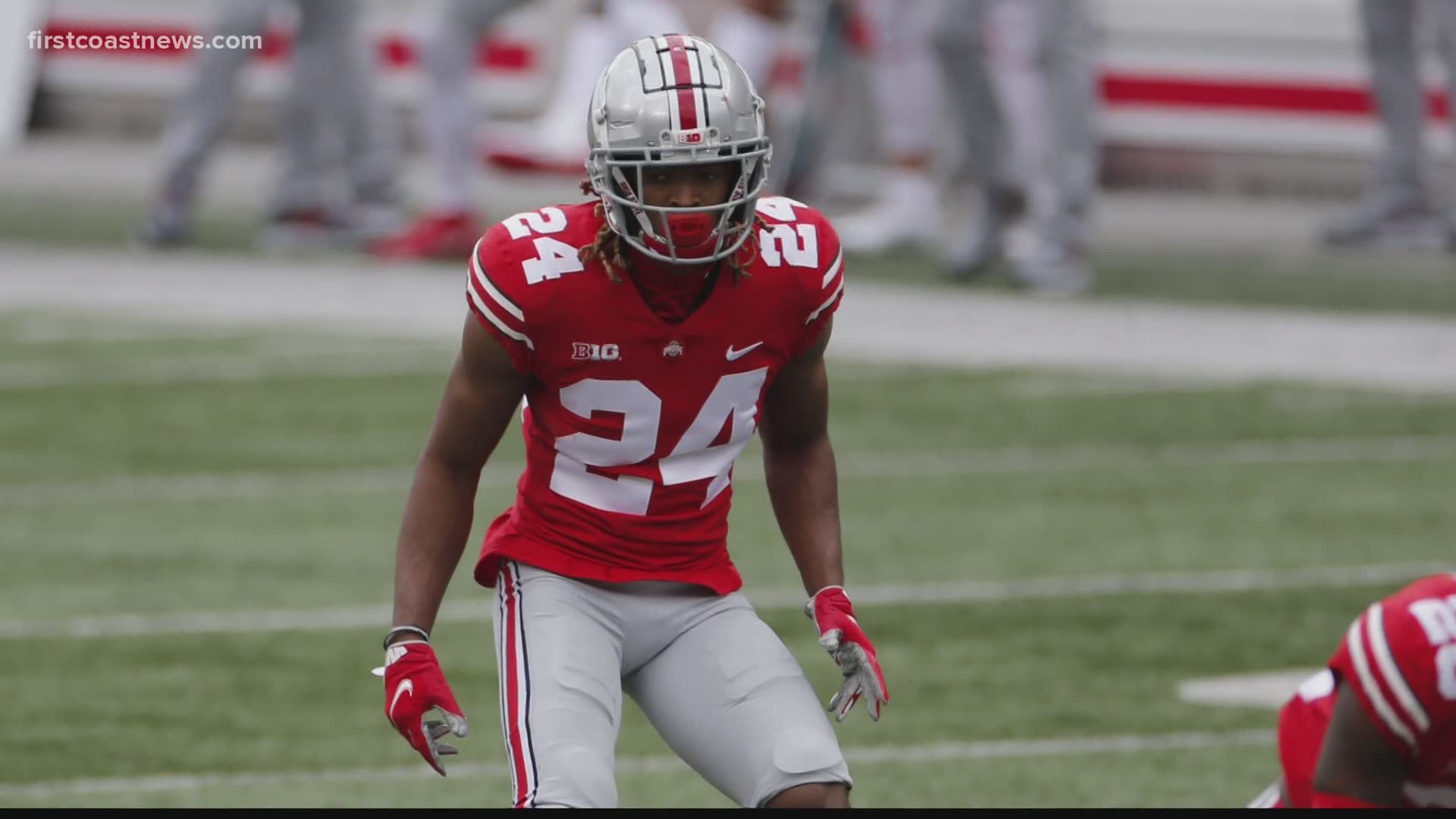 MAY 1, 1:55 P.M.: For those who thought Urban Meyer tap back into his Ohio State pool: it's happening.

The Jaguars selected tight end Luke Farrell with the 145th overall pick. Farrell had 34 receptions for 380 yards with four touchdowns in 21 career games over four years in Columbus.

Perhaps not so coincidentally, 2018 was Urban Meyer's last year with #Buckeyes

MAY 1, 12:56 P.M.: For the first time in the 2021 NFL Draft, the Jaguars have traded up. With the 121st overall pick, the Jaguars have selected UAB Linebacker/Edge Rusher Jordan Smith out of UAB. Smith started his college career as a Florida Gator before being suspended and subsequently transferred. The 6'6'' 255 lb'er had 23.5 TFL and 12.5 sacks in 21 career games at UAB.

APRIL 30, 9:40 P.M.: With the first pick of the third round, the Jaguars have selected safety Andre Cisco of Syracuse University. Cisco's final two collegiate seasons were plagued by injuries, including a torn ACL. But he exploded onto the scene his freshman year, racking up nine passes defended and seven interceptions. Even in just nine games in 2019 Cisco had five interceptions.

You wanted a ball-hawk? You got him.

Risk it to get the biscuit is the motto for #Jaguars on Day Two.

APRIL 30, 9:33 P.M.: With the final pick of the second-round, the Super Bowl champion Tampa Bay Buccaneers have selected Florida quarterback Kyle Trask. A Heisman finalist, Trask threw for more than 4,200 yards and 43 touchdowns this fall.

APRIL 30, 8:14 P.M.: With the 45th overall pick, the Jaguars select offensive tackle Walker Little out of Stanford University. Walker's 2019 season ended with a knee injury and he opted-out of the 2020 season. A former top-five prospect coming out of high school, Little was an All-Pac 12 selection his first two seasons.

APRIL 30, 7:18 P.M.: The Jaguars select defensive back Tyson Campbell out of the University of Georgia with the 33rd overall pick. In 33 career games in Athens, Campbell had 10 passes defended, 3.5 TFL, and one interception. He is an alum of American Heritage-Plantation High School.

Credit: AP
Georgia defensive back Tyson Campbell (3) covers a play against Florida during the first half of an NCAA college football game, Saturday, Nov. 7, 2020, in Jacksonville, Fla. (AP Photo/John Raoux)

Says he feels comfortable playing inside and outside.#Jaguars 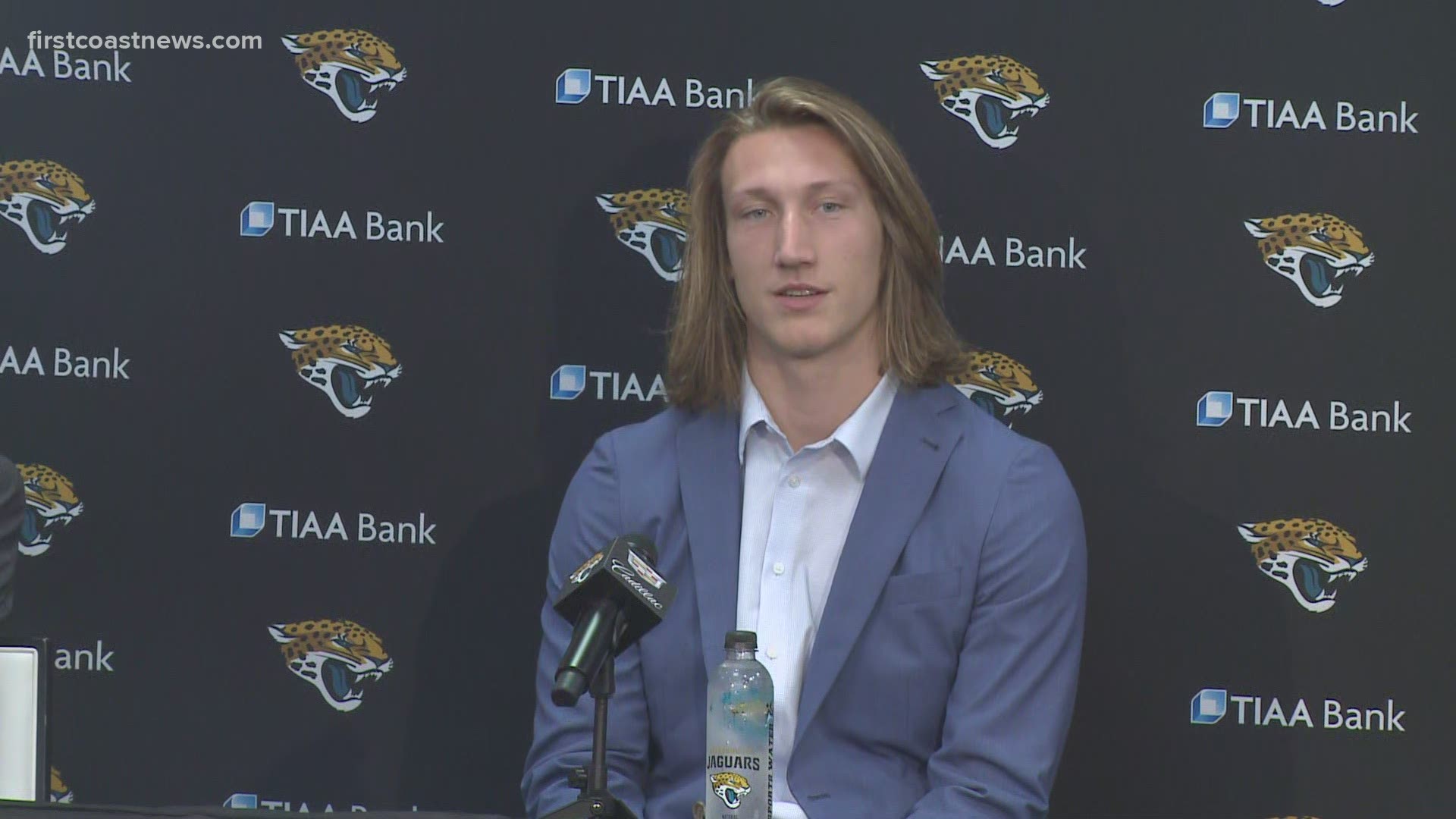 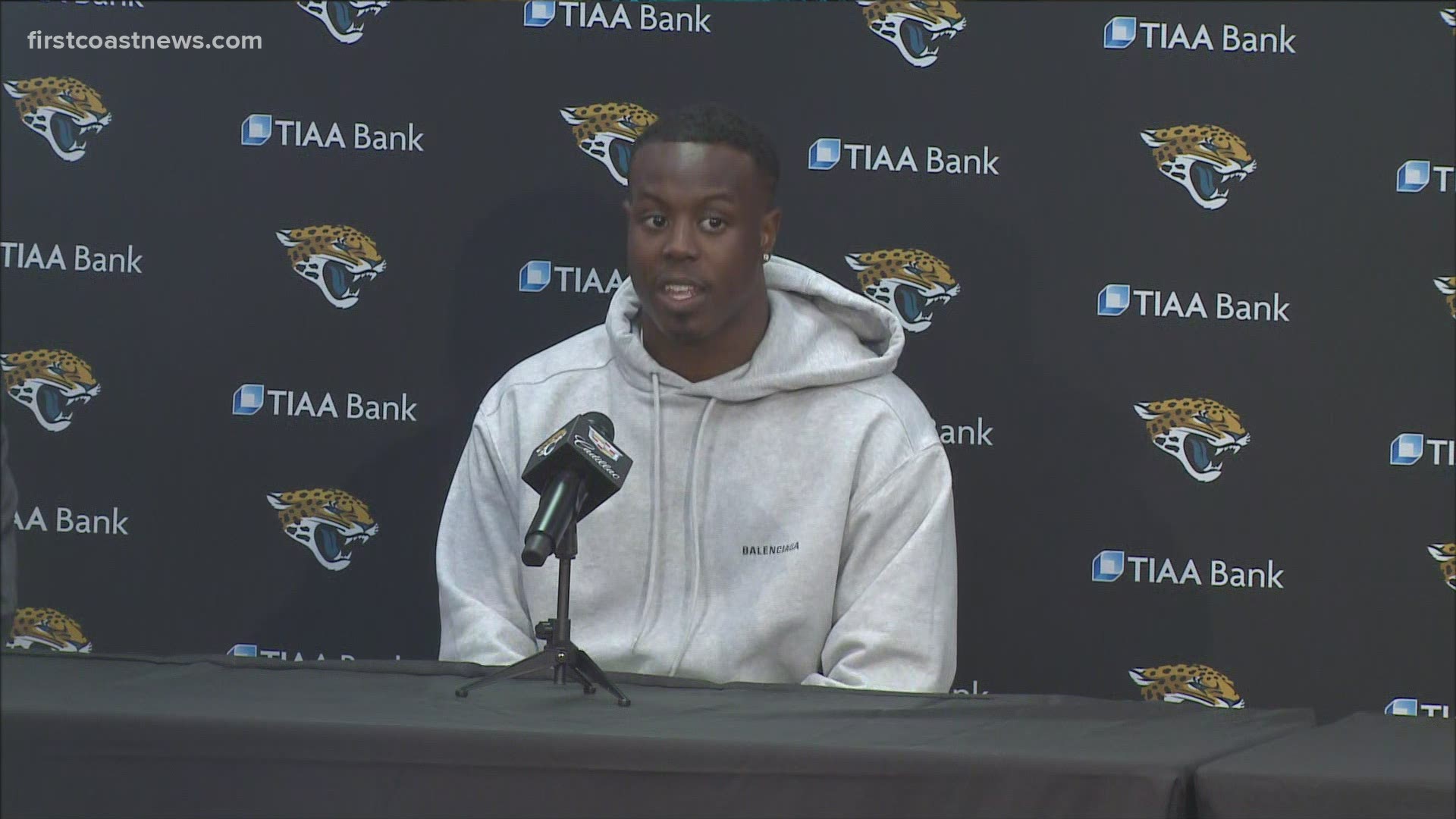 APRIL 29, 11:15 P.M.: The Jaguars have selected Clemson running back Travis Etienne with the No. 25 overall pick, reuniting him with his college quarterback, No. 1 overall pick Trevor Lawrence. Etienne is the ACC's all-time leader in rushing yards. 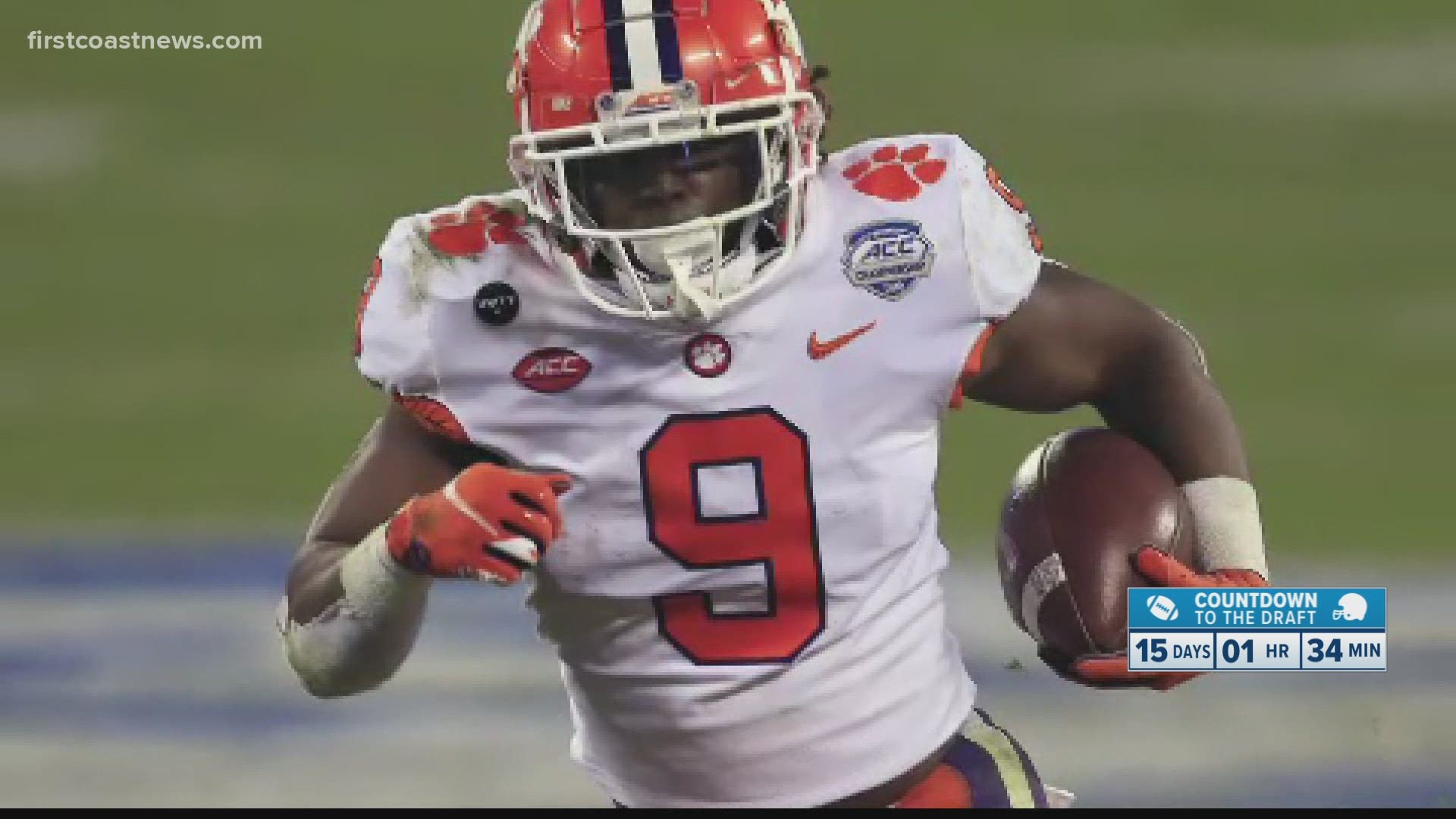 Beyond Number One: Travis Etienne

APRIL 29, 11:09 P.M.: The Jaguars are on the clock with the 25th overall selection in the 2021 NFL Draft. Among the players on the board include: defensive tackle Christian Barmore, linebacker Jeremiah Owusu-Koramoah, safety Trevon Moehrig, and offensive tackle Teven Jenkins.

LETS GOOOOO!!!!!!! So excited to be in Jacksonville. The best is yet to come. #DUUUVAL

At 8:26 eastern time on April 29th, 2021 Trevor Lawrence became the quarterback of the Jacksonville Jaguars.

All signs point to the Jaguars selecting Clemson's Trevor Lawrence, long-regarded as a "generational quarterback prospect," the best the NFL has seen since Andrew Luck in 2012. *Story continues below

In addition to the first pick, the Jaguars are slated to make the following selections: 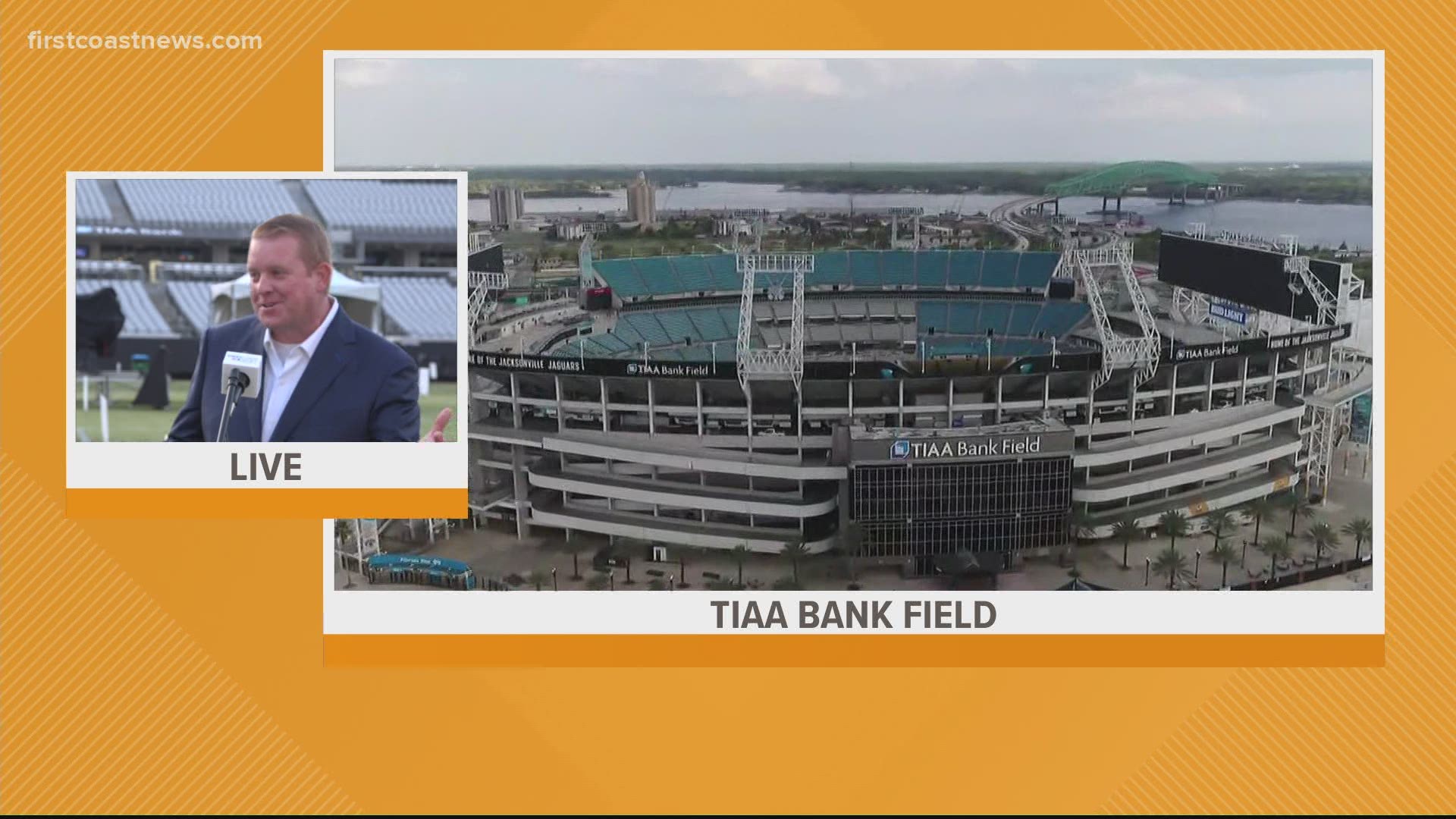 Have you checked out Mia O'Brien's final Mock Draft Monday? She reveals her final set of projections for the 2021 NFL Draft.

The Jaguars will be hosting the #DUUUUVAL Draft Party presented by Travel Camp RV on Thursday at TIAA Bank Field.

First Coast News will be broadcasting live from the Draft Party all day long, beginning with Good Morning Jacksonville at 4:30 a.m.

LETS GOOOOO!!!!!!! So excited to be in Jacksonville. The best is yet to come. #DUUUVAL

The @FCNsports Team has you covered all day long with live updates, stories & more!

And be sure to watch all three days of the #NFLDraft on @FCN2go!https://t.co/drhxCzW7AD

Are you ready, #DUUUVAL?