While metro Atlanta was celebrating Super Bowl week, undercover officers were executing a blitz of their own. 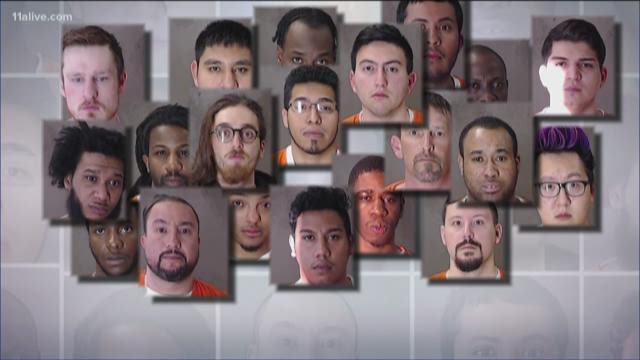 DEKALB CO., Ga. -- Twenty-one men were arrested for allegedly arranging to have sex with a child. The GBI task force announced the arrests that followed an undercover sting that lasted five days, ending on Super Bowl Sunday.

The men range in age from 20 to 55 and work in a variety of fields from rideshare drivers to construction and grocery store clerks. One of the men arrested was a behavioral health case manager. Some also were arrested for having illegal drugs on them, according to authorities.

The sting was centered in Brookhaven, Ga. But included agencies across Georgia who are members of the Georgia Internet Crimes Against Children Task Force.

RELATED: 'Motivation' is in jail for sex trafficking; hear his warning to parents

The goal of the months-long investigation called “Operation Interception” was “to arrest persons who communicate with children on-line, have sexually explicit conversations, and then travel to meet them for the purpose of having sex,” according to a release.

Only one person arrested was charged with human trafficking violations because they allegedly arranged to pay money for sex with a child through a website known for sex solicitation. This was described as a decrease in solicitation in relation to similar operations the task force conducted.

One of the men arrested was 32-year-old Thomas Cheung, a gaming employee from metro-Atlanta and a Twitch partner. According to the DeKalb County Police arrest warrant, Cheung thought he was talking to a 14-year-old girl through the dating app, Whisper, but it was actually an undercover agent.

They said the media campaigns around human trafficking awareness ahead of the Super Bowl in Atlanta could have been responsible for the decrease in these types of solicitations.

However, the task force used popular dating apps to identify 20 more suspects who they say were willing to have sex with children.

RELATED: 'I was catfished on social media, then sold for sex for 3 years.'

RELATED: Child, infant sex trafficking: It's like 'the Wild West'

“Those arrested had sexually explicit conversations with whom they believed to be a child and most of those arrested traveled to meet a child for sex,” the release read.

The release also said a conversation about money was involved in most of those conversations.

Another note the task force made was that some of the suspects were interacting with multiple investigators posing as children.

“Such activity confirms what investigators uncover conducting these types of investigations: that many predators specifically seek out minors on such websites to groom them as potential victims for sexual contact.” 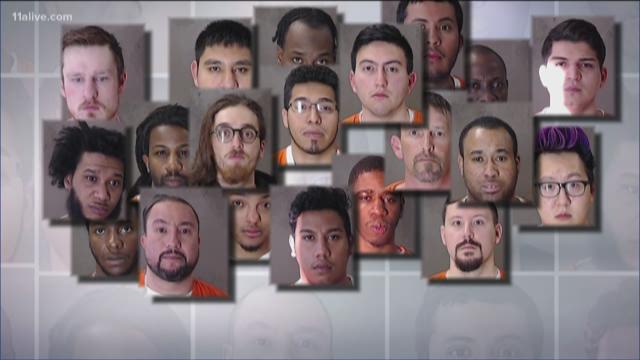 RELATED: This suburban dad paid for sex with 25 girls. Why?

In addition to the suspects messaging with the minors and traveling to meet for sex, the task force said there were also suspects who would sext with the investigators posing as minors, expose themselves and ask for nudes.

“Our message is simple: if you think you’re coming to Brookhaven to meet a child for sex, you’re likely to find us instead. This behavior will never be tolerated here.”

The cases will be prosecuted by the Office of the DeKalb County District Attorney.

These are the suspects arrested and charged

While this operation was underway, other task forces were making arrests. The Friday before the Super Bowl, investigators with Homeland Security said 40 people had been arrested for sex trafficking in metro Atlanta as part of a crackdown before the game.

Atlanta is known as a hub for human trafficking because of the international airport but, the Atlanta police chief is pushing back against that. She said those arrests were not made in metro Atlanta.

"They made some really decent arrests -- but was it metro Atlanta? No. And it wasn't as focused on victims. It was more on the johns coming in," Shields said. "We (need to) make it clear that it was not sex trafficking victims in Metro Atlanta, because I think that label is unfairly applied to this city."

Atlanta Police Department is part of an FBI task force that focuses on rescuing victims of sex trafficking.

"Homeland Security has a separate initiative that they do. In the report out that was provided at the NFL security meeting, it was Homeland Security reporting on what they had accomplished," Shields said.

She did not want to take away from the fact that the arrest removed some bad guys from the streets, but at the same time, she wanted to make sure that the information was put in perspective.

You can report missing children or child pornography to the National Center for Missing and Exploited Children (NCMEC) at 1-800-843-5678 (THE-LOST) or through their CyberTipLine.

Child, infant sex trafficking: It's like 'the Wild West'

Human Trafficking: an epidemic too close to home